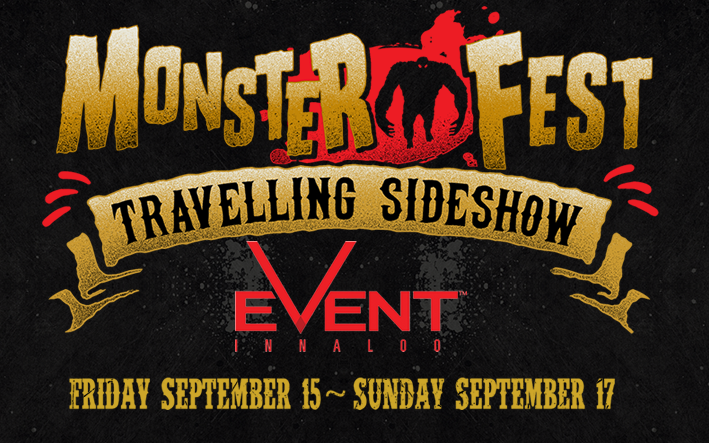 Perth genre fans will get a taste of Monster Pictures’ annual Melbourne-based genre film festival Monster Fest this July thanks to the continued partnership with Event Cinemas to present MONSTER FEST TRAVELLING SIDESHOW at Event Cinemas Innaloo on September 15-17th, 2017.

Perth genre fans will get a taste of Monster Pictures’ annual Melbourne-based genre film festival Monster Fest this July thanks to the continued partnership with Event Cinemas to present MONSTER FEST TRAVELLING SIDESHOW at Event Cinemas Innaloo on September 15-17th, 2017.

Opening our festival is the Perth premiere of Tyler MacIntyre’s brutally hilarious slasher TRAGEDY GIRLS, followed by the Australian Premiere of surreal sci-retro-tech horror SEQUENCE BREAK and the claustrophobic Spanish suspense-driven thriller THE GLASS COFFIN will also have its Australian Premiere. Following their acclaimed Lovecraftian feature SPRING, writer/directors Aaron Moorhead & Justin Benson’s THE ENDLESS will have its Perth Premiere, making its Australian Premiere is Colin Minihan’s zombie apocalypse game-changer IT STAINS THE SAND RED while Italian horror maestro Dario Argento’s 1977 masterpiece SUSPIRIA will celebrate its 40th anniversary with a presentation of the all-new stunning 4K restoration.

Another 4K restoration making its Perth debut is David Lynch’s TWIN PEAKS: FIRE WALK WITH ME, a window into the last seven days in the life of Laura Palmer. Australian mockumentary and recent Fantastic Fest official selection, TOP KNOT DETECTIVE will have a hometown screening along with a filmmaker Q&A. In association with Umbrella Films, we are proud to present tribute screenings to George A. Romero with the undisputed 1985 classic DAY OF THE DEAD and Tobe Hooper with THE TEXAS CHAIN SAW MASSACRE.

Sadie and McKayla are two social-media obsessed best friends who will stop at nothing to build their online following. The self-titled “Tragedy Girls” kidnap Lowell, an unambitious local serial killer, and force him to mentor them into becoming modern horror legends by committing murders and using their online show to cover the ‘tragedies’ and blow up the internet. As the bodies fall, the girls become national news and panic in their small town hits a fever pitch, the girls must rethink their plan before they find themselves the latest victims of their own killing spree.

Oz is an antisocial loner whose only solace is his love for ’80s arcade games, that is until he meets Tess, who shares his passion. The two quickly become romantically entwined, but their budding romance is slowly threatened by a mysterious game that seems to be drawing them deeper and deeper into its void. Strange occurrences linked to the game slowly begin to take over their minds and bodies until Oz is drawn into a life and death battle with his electronic foe. Sequence Break masterfully melds retro ’80s nostalgia with the body-horror of Cronenberg’s finest works.

In the throes of a zombie apocalypse, Molly (JIGSAW’s Brittany Allen) – a troubled woman from Las Vegas with a dark past – finds herself stranded in the desert with a lone ravenous Zombie (Netflix’ NARCOS, Juan Riedinger) on her tail. At first, she’s easily able to out pace her un-dead pursuer, but things quickly become a nightmare when she realizes the zombie doesn’t need to ever stop and rest. Running low on supplies and beat down by the harsh environment, Molly will have to summon the strength she never knew she had to ultimately face the zombie, and the demons that have chased her all her life.

In this the third film in the continuing saga of the undead from writer/director George A. Romero, a small group of scientists and soldiers have taken refuge in an underground missile silo where they struggle to control the flesh-eating horror that walks the earth above. But will the final battle for the future of the human race be fought among the living or have they forever unleashed the hunger of the dead? Lori Cardille, Joe Pilato and Richard Liberty star in this controversial classic with groundbreaking gore effects by Tom Savini.

Dressed for the occasion in an elegant evening dress, Amanda enters the luxurious limousine waiting in front of her house to take her to a gala evening where she will receive an award for her acting achievements. Suddenly the windows are tinted black, Amanda’s mobile phone is jammed and she cannot open any of the doors. A strange voice, distorted by a metallic filter, then demands that Amanda perform a series of lurid and invasive acts, each more shocking than the last. Trapped inside her glass coffin Amanda soon realises that if she wants to survive then she had better do whatever the sinister voice asks.

Two brothers receive a mysterious message inspiring them to pay a visit to the cult they escaped as children. As unsettling events and phenomena begin to occur, the brothers are forced to question whether the cult’s supernatural beliefs might not be entirely made up – and if, now that they’ve returned, they’ll be allowed to leave again.

In the early 1990’s, a little known Japanese Samurai/Detective Series was syndicated to public access TV in Australia and became a cult success. In Japan, it was titled “Ronin Suiri Tentai” (roughly translating to “Deductive Reasoning Ronin”), but soon came to be known in the West as TOP KNOT DETECTIVE. The original Japanese series was legendary in in its home country as being a cultural train-wreck, led by its insane writer/director/producer/lead actor Takashi Takamoto. He couldn’t act. He couldn’t fight. He had no idea how to write a TV show. TOP KNOT DETECTIVE tells the story of Detective Sheimasu, an Edo era police officer turned ronin on a never-ending road to vengeance after being framed for the murder of his Master. Along the way he would fight ninjas, samurai, yakuza, aliens, monsters, more ninjas, demons, robots, time traveling baseball players and the occasional go-go dancer.

A tale far too horrific to be real – a van full of friends, a dusty back road in Texas, the thud of a mallet, the buzz of a chainsaw, muted screams and the tearing of flesh. Considered by many as the bloody benchmark of horror movies, the original 1974 THE TEXAS CHAIN SAW MASSACRE is a visceral experience like none other. Inspired by the real-life story of murderer Ed Gein, it follows five young students who unwittingly meet up with a sinister hitchhiker (Edwin Neal) and stumble across a house of horrors where mask-wearing maniac Leatherface (Gunnar Hansen) rules with a wooden mallet and the ultimate weapon of torture – a whirring chainsaw.