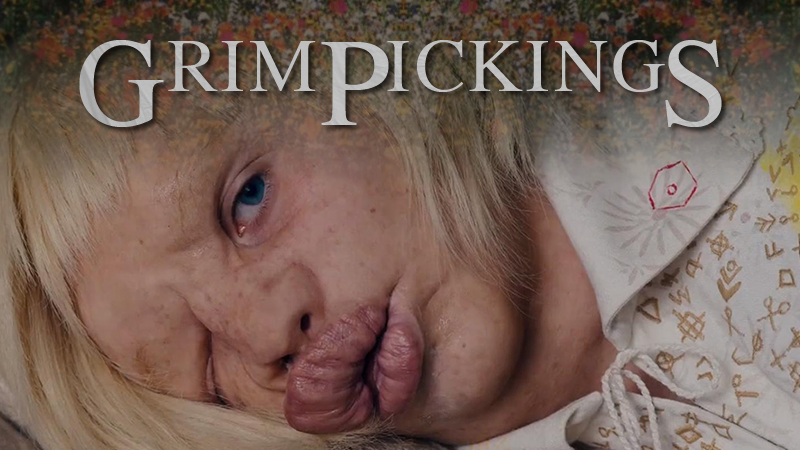 GRIM PICKINGS this week includes key dates to dismember with the polarising sophomore feature from a new auteur of horror hitting cinema screens while jump scares aplenty are served up in a minimum order horror on home entertainment!

MIDSOMMAR (Limited Release)
Filmmaker Ari Aster follows up his 2018 breakthrough debut feature HEREDITARY with an uninhibited and hallucinatory folk horror that is as compelling as it is downright disturbing. MIDSOMMAR’s blend of contrasting imagery, unnerving pacing and deeply affecting psychological horror will have you riding the edge of your seat and clawing at the walls of your mind in equal measure. While Aster’s latest effort is truly an unsettling experience, it will likely divide horror fans between those whore adore it and others that’ll deem it pretentious artwank. Dani (Florence Pugh) and Christian (Jack Reynor) are a young American couple with a relationship on the brink of falling apart. But after a family tragedy keeps them together, a grieving Dani invites herself to join Christian and his friends on a trip to a once-in-a-lifetime midsummer festival in a remote Swedish village. What begins as a carefree summer holiday in a land of eternal sunlight takes a sinister turn when the insular villagers invite their guests to partake in festivities that render the pastoral paradise increasingly unnerving and viscerally disturbing.

THE CURSE OF THE WEEPING WOMAN
Michael Chaves make his feature directorial debut with this loose entry in THE CONJURING universe. We say loose as there’s really only one scene that ties this film into the aforementioned franchise and we suspect the studio wedged it in there to give this film an opportunity to find a theatrical audience. That said THE CURSE OF THE WEEPING WOMAN (known as THE CURSE OF LA LLORONA in the United States) is not too bad a film, unlike last year’s THE NUN, it’s just lacklustre. Despite an interesting premise based off Mexican folklore, THE WEEPING WOMAN is a rather run-of-the-mill spook-fest with jump-scares you can set your watch to. The real charm of the film lies with its family dynamic and the chemistry of its actors, that feels like a throwback to paranormal classics like POLTERGEIST and THE AMITYVILLE HORROR. In 1970s Los Angeles, the Weeping Woman is stalking the night—and the children. Ignoring the eerie warning of a troubled mother suspected of child endangerment, a social worker (Linda Cardellini) and her own family are soon drawn into a frightening supernatural realm. Their only hope to survive the Weeping Woman’s deadly wrath may be a disillusioned priest and the mysticism he practices to keep evil at bay, on the fringes where fear and faith collide. Beware of her chilling wail…she will stop at nothing to lure you into the gloom. Because there is no peace for her anguish. There is no mercy for her soul. And there is no escape from the curse of the Weeping Woman. Roadshow’s Blu-ray release contains three production Featurettes ranging from the mythology of the titular character to behind-the-scenes of the film, Deleted Scenes and Storyboards from the film itself.

THE WIND (DVD Only)
Director Emma Tammi’s period set supernatural horror is an atmosphere-soaked tale of isolation and strength that will hold you captive for its brief eight-five minute runtime. An unseen evil haunts the homestead in this chilling, folkloric tale of madness, paranoia, and otherworldly terror. Lizzy (Caitlin Gerard) is a tough, resourceful frontierswoman settling a remote stretch of land on the 19th-century American frontier. Isolated from civilization in a desolate wilderness where the wind never stops howling, she begins to sense a sinister presence that seems to be borne of the land itself, an overwhelming dread that her husband (Ashley Zukerman) dismisses as superstition. When a newlywed couple arrives on a nearby homestead, their presence amplifies Lizzy’s fears, setting in motion a shocking chain of events. Umbrella Entertainment’s DVD release contains no supplementary features.

THE SHADOW
Making its local Blu-ray debut courtesy of Umbrella Entertainment is Russell Mulcahy’s live action adaptation of the 1930s radio play starring Alec Baldwin as the titular character in what is a largely forgotten but immensely enjoyable superhero film. Donning his sweeping black cape and disguise, The Shadow (Baldwin) takes on his most dangerous nemesis yet: the last descendant of the great Genghis Khan whose weapon of choice is an atomic bomb. With the fate of humanity hanging in the balance, they square off for a spectacular battle in a dazzling mixture of mind-blowing special effects, humour and a dose of the macabre that will hold you spellbound! Umbrella Entertainment’s Blu-ray & DVD release contain no supplementary features.

ONCE UPON A TIME IN LONDON (DVD Only)
For the first time ever, the violent reign of two of London’s most notorious gangsters, Jack ‘Spot’ Comer and Billy Hill, is brought to life in ONCE UPON A TIME IN LONDON and despite its notably modest budget, its an engaging true crime tale worthy of a Sunday afternoon viewing. Charting the epic rise and legendary fall of a criminal empire that lasted for three decades and paved the way for the notorious Kray twins to exert their dominance over the London’s gangland realm. Defiant Screen Entertainment’s DVD release contains no supplementary features.