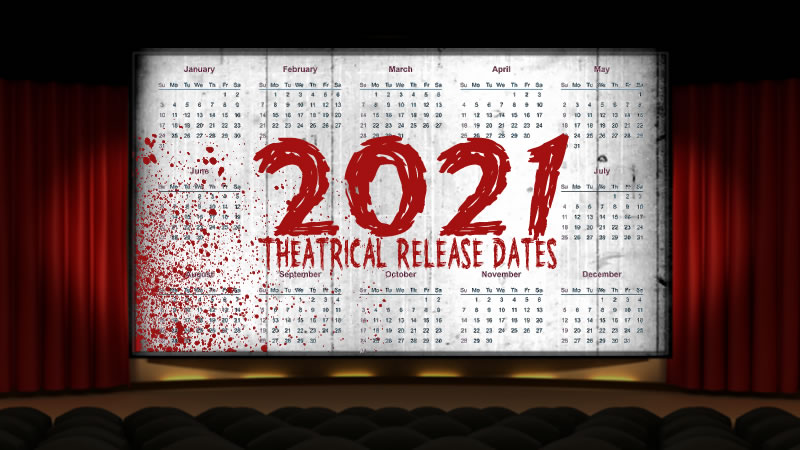 After a year of a hefty delays, we thought we’d check-in with local distributors to ascertain as to when we can expect to see the major genre releases this year in cinemas and here’s the results of our findings…

SPIRAL – FROM THE BOOK OF SAW (StudioCanal)
Working in the shadow of an esteemed police veteran (Samuel L. Jackson), brash Detective Ezekiel “Zeke” Banks (Chris Rock) and his rookie partner (Max Minghella) take charge of a grisly investigation into murders that are eerily reminiscent of the city’s gruesome past. Unwittingly entrapped in a deepening mystery, Zeke finds himself at the center of the killer’s morbid game.

A QUIET PLACE PART II (Paramount Pictures)
Following the deadly events at home, the Abbott family (Emily Blunt, Millicent Simmonds, Noah Jupe) must now face the terrors of the outside world as they continue their fight for survival in silence. Forced to venture into the unknown, they quickly realize that the creatures that hunt by sound are not the only threats that lurk beyond the sand path.

THE CONJURING: THE DEVIL MADE ME DO IT (Warner Bros/Universal Pictures)
The Devil Made Me Do It reveals a chilling story of terror, murder and unknown evil that shocked even experienced real-life paranormal investigators Ed and Lorraine Warren. One of the most sensational cases from their files, it starts with a fight for the soul of a young boy, then takes them beyond anything they’d ever seen before, to mark the first time in U.S. history that a murder suspect would claim demonic possession as a defense.

THE NIGHT HOUSE (Searchlight Pictures/Disney)
Reeling from the unexpected death of her husband, Beth (Rebecca Hall, GODZILLA VS KONG) is left alone in the lakeside home he built for her. She tries as best she can to keep it together – but then nightmares come. Disturbing visions of a presence in the house calling to her, beckoning her with a ghostly allure. Against the advice of her friends, she begins digging into her husband’s belongings, yearning for answers. What she finds are secrets both strange and disturbing – a mystery she’s determined to unravel.

OLD (Universal Pictures)
Visionary filmmaker M. Night Shyamalan unveils a chilling, mysterious new thriller about a family on a tropical holiday who discover that the secluded beach where they are relaxing for a few hours is somehow causing them to age rapidly … reducing their entire lives into a single day.

DON’T BREATHE 2 (Sony Pictures)
Co-writer Rodo Sayagues steps into the director’s seat for the follow-up to 2016’s DON’T BREATHE and while there’s no trailer nor synopsis we do know that Stephen Lang is back reprising his role as The Blind Man but we cannot confirm whether he’ll be attempting to make any donations in this one!

CANDYMAN (Universal Pictures)
For as long as residents can remember, the housing projects of Chicago’s Cabrini Green neighborhood were terrorized by a word-of-mouth ghost story about a supernatural killer with a hook for a hand, easily summoned by those daring to repeat his name five times into a mirror. In present day, a decade after the last of the Cabrini towers were torn down, visual artist Anthony McCoy (Yahya Abdul-Mateen II) and his girlfriend, gallery director Brianna Cartwright (Teyonah Parris), move into a luxury loft condo in Cabrini, now gentrified beyond recognition and inhabited by upwardly mobile millennials. With Anthony’s painting career on the brink of stalling, a chance encounter with a Cabrini Green old-timer (Colman Domingo) exposes Anthony to the tragically horrific nature of the true story behind Candyman. Anxious to maintain his status in the Chicago art world, Anthony begins to explore these macabre details in his studio as fresh grist for paintings, unknowingly opening a door to a complex past that unravels his own sanity and unleashes a terrifyingly viral wave of violence that puts him on a collision course with destiny.

MALIGNANT (Warner Bros/Universal Pictures)
While a trailer let alone a synopsis has yet to be released for MALIGNANT, filmmaker James Wan (THE CONJURING, SAW) has described the film as a “little horror thriller” and “genre-bending“.

LAST NIGHT IN SOHO (Universal Pictures)
The latest feature from Edgar Wright (BABY DRIVER) is a return to genre and while there’s no official synopsis out-there yet, we understand it’s both a psychological and time-bending thriller, with Anya Taylor-Joy (THE NEW MUTANTS).

GHOSTBUSTERS: AFTERLIFE (Sony Pictures)
When a single mum and her two kids arrive in a small town, they begin to discover their connection to the original ghostbusters and the secret legacy their grandfather left behind.