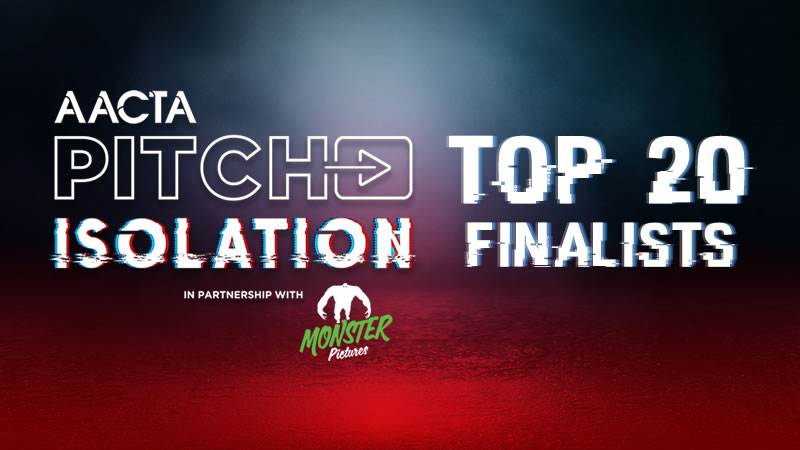 We’re pleased to reveal the Round 1 Finalists for the AACTA Pitch: ISOLATION in partnership with Monster Pictures, these 20 filmmakers have submitted remarkable horror and genre pitches and have proceeded to the next round of judging for a chance to receive $10,000 in development funds and a distribution deal with Monster Pictures!

Our 20 finalists each submitted an outstanding pitch around the theme of ‘Isolation’, demonstrating originality, strong storytelling potential and a creative ability to work within limited locations to create entertaining genre and horror pieces. These shortlisted entries have been selected to participate in the second round of the initiative where they will be asked to meet challenges that exist in the real world of feature film development. Clear planning around financing, marketing and audience development will be critical as is the demonstration that they have a clear understanding of what it takes to take the project to market in a fresh, innovative and exciting way.

2 HOURS FROM – Gareth Davies | Livia Hanich | Megan Williams | Joe Newkirk
Betrayed & broke after her high-flying businessman husband dies in mysterious circumstances, an oppressed mother shuns her privileged city life to flee to the bush, finding herself isolated in a fight for her life with a bushman who will stop at nothing to gain sovereignty over the little she has left.

BLACKHEATH – Karina Banno | Raechelle Banno | George Maher
Max recounts her time in the strict religious community she recently escaped but struggles to move on as she fears her old ‘Family’ may be closing in on her and the only person she has left.

BURNING – Jordan Watton | Julia Corcoran
A low-achieving outsider who works as volunteer firefighter ignites a series of deadly blazes throughout bushfire season in his small town in rural Australia.

THE DRYLANDS– Darcy Conlan | Gennaro Gregory
A family become embroiled in a paranoid cover up after a bunyip dwelling on their farm attacks a group of unsuspecting cattle rustlers.

EVENFALL – Dean Butler | Robert Faulkner
A widower with supernatural abilities helps a smalltown cop stop a spree of ritualistic murders and save her daughter from dark forces.

FIERCE– Christian D’Alessi | Jesse O’Brien
A single mother and her two children, trapped and stalked by the mythic blue mountain phantom, must escape imminent bushfires and take back their lives.

THE GYRE – Charlotte George | Ben Chessell
In the middle of the North Pacific Garbage Patch, an all-female science expedition is ship-wrecked and stalked by a starving Great White shark.

HEADHUNTER – Daniel Jackson
An obsessive documentary filmmaker discovers fresh evidence that implicates his great-grandfather in a colonial massacre. Seeking to redress past wrongs and set the record straight, he travels to an island off the coast of Papua New Guinea to investigate, and discovers something far more sinister than he’d imagined.

INHERENT – January Jones
Struggling to connect after the birth of their baby, a lesbian couple take a trip to the country, only to discover the townsfolk have taken a disturbing interest in their son.

JONESY – Aaron McCann
When a lazy newlywed’s pet cat starts telepathically convincing him to assist the feline in murdering the neighbour’s pet Cockatoo — things start to spiral out of control, as bad planning and ineptitude lead to a grizzly triple homicide and a desperate attempt at a cover-up.

REAR VIEW MIRROR – Samantha Price | Sean Loch
Crossing the desert to visit her sick mother, an unassertive teen, along with her father, are hunted by a malicious entity that only reveals itself to its next victim.

THE REMOTE – Kelly Baigent | Luke Kneller
In 2021 Australian local authorities investigating multiple human deaths on a decommissioned nuclear test site, found several discarded cameras. The contents of those cameras, and the identities of the dead are classified: Top Secret. Anonymous whistleblowers collated this footage, and when pieced together, it reveals: An enthusiastic group of young Sydney University academics travelling to the nuclear test site to analyse the radiation impact on the flora and fauna.

SCORPION – Demi-Lee Worrad | Indiana Kwong
1991 – The Mylkwood Manor stands isolated in the thick Australiana bushland, home to a cannibal cult led by an elderly woman known as Mother. When the youngest girl finds herself drawn to one of the cult’s sacrifices, she begins to remember who she was before she came to this place.

SLEEPLESS – Nathan Lacey
When a crime scene cleaner finds a large sum of cash on the job he is hunted by a deviant killer who will go to extreme lengths to get his money back.

TERROR ZONE – Josh Sambono | Laura Sambono | Lucca Barone- Peters| Colin Wilson
A lonely assassin must confront traumatic childhood memories before she is consumed by a monster inside of her which has awakened.

UNDER– David Churak | Charlotte Daraio | Taryn Borgford
A successful woman returns to her isolated boarding school to bury a hideous tragedy from her past. There, she’s joined by four fellow alumni. What should be a happy reunion devolves into a slew of vicious accusations – but the real danger is the very present horrors stalking their old halls.

WE OFFER THEE UNTO THE SEA – Tel Benjamin | David Burrowes
In a bleak future an idealistic refugee finds safety on the isolated island utopia of Salt Isle, but after witnessing the escape of an accused murderer he’s tasked by the community’s charismatic leader to re-capture the convict and prove himself worthy of his new home and it’s inhabitants’ dark secrets.

WHO THE BLOODY HELL GOES THERE? – Oscar Axel Thorborg | Aliya Tarmo
Fear and paranoia spread through staff at a wind farm in outback Australia when a conspiracy extremist claims the turbines are awakening an ancient evil.

Stay tuned for our next announcement as to the eight filmmakers who will be selected from the list above to pitch their project to a panel of established producers and distributors for a chance to receive $10,000 in development funds and a distribution deal with Monster Pictures!