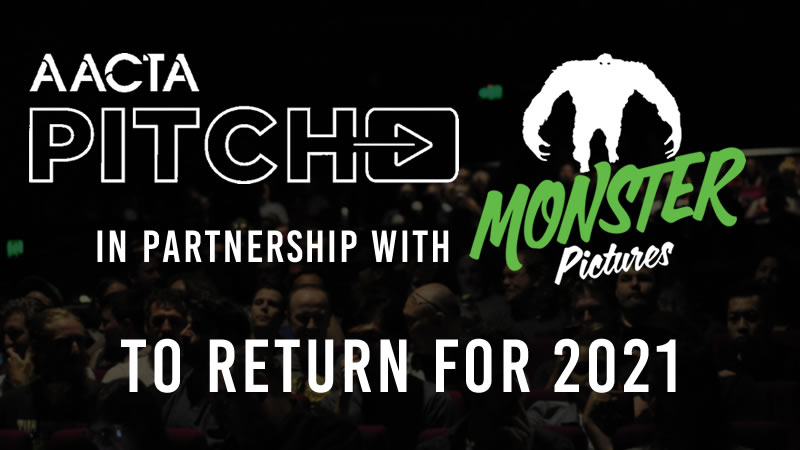 AACTA PITCH In Partnership With MONSTER PICTURES To Return For 2021!

Last year AACTA and MONSTER PICTURES partnered on Australia’s ultimate horror and genre film development initiative, AACTA Pitch: ISOLATION in Partnership with Monster Pictures. The initiative, launched in July 2020, focused on developing original horror and elevated genre feature film concepts and saw a staggering amount of entries with close to 200 submissions received in the opening round.

Through a series of development rounds over the following months, the filmmaking teams were required to demonstrate clear planning around finance, marketing, and audience development. Ultimately eight projects were selected to compete against one another in a live-streamed pitching final at AACTA ScreenFest 2020.

Jordan Watton (writer / director) and Julia Corcoran (producer) won for their project BURNING. The team have subsequently received $10,000 in development funds and an exclusive distribution deal with Monster Pictures.

“The experience of AACTA Pitch: ISOLATION has been invaluable in driving the team to lift BURNING to be market ready” said Jordan Watton of the initiative. “The resources provided and collective experience of Monster Pictures, AACTA and Lexlab have assisted us in developing a feature film pitch with not just strong creative but with a consideration of how it would fit in the Australian marketplace.”

“We were both thrilled and overwhelmed with the level of talent that emerged through the initiative” said Director of Monster Pictures Grant Hardie.

In fact, Grant Hardie was so impressed with some of these concepts that, following the 2020 competition, Monster Pictures in partnership with Chris Brown’s production company PICTURES IN PARADISE, optioned five of the other first round finalists’ projects. They are now working with the teams to develop their projects and take them to market.

One of the projects, Aaron McCann’s JONESY, has been selected to participate in the Frontières International Co-Production Market and, as such, Aaron will be pitching Jonesy to producers, sales agents, distributors and financiers from around the globe at the Fantasia International Film Festival in Montreal in August.

AACTA’s Awards and Industry Development Manager, Ivan Vukusic says ”This is an amazing result for the first year and due to this overwhelming success, on behalf of the AACTA team, I am extremely excited to announce that we are carrying over the competition with the soon to be launched 2021 initiative”.

“We’ve landed on a fantastic theme for this year which we are very excited about, and whilst I won’t reveal it here, let’s just say this year we’re looking for films with real bite” expresses Grant Hardie.

The AACTA Pitch in Partnership with Monster Pictures 2021 initiative will launch August 30, stay tuned for full details on that date.

See below for the full list of 2020 projects that have been optioned by Monster Pictures and Pictures in Paradise:

BURNING: Jordan Watton / Julia Corcoran
A low-achieving outsider who works as volunteer firefighter ignites a series of deadly blazes throughout bushfire season in his small town in rural Australia

FIERCE: Christian D’Alessi, Jesse O’Brien
A single mother and her two children, trapped and stalked by the mythic blue mountain phantom, must escape imminent bushfires and take back their lives.

JONESY: Aaron McCann / Michael Facey
When a lazy newlywed’s pet cat starts telepathically convincing him to assist the feline in murdering the neighbour’s pet Cockatoo — things start to spiral out of control, as bad planning and ineptitude lead to a grizzly triple homicide and a desperate attempt at a cover-up.

REAR VIEW MIRROR: Samantha Price / Sean Loch
Crossing the desert to visit her sick mother, an unassertive teen, along with her father, are hunted by a malicious entity that only reveals itself to its next victim.

TERROR ZONE: Josh Sambono / Laura Sambono /Lucca Barone-Peters /Colin Wilson
A lonely assassin must confront traumatic childhood memories before she is consumed by a monster inside of her which has awakened.

THE REMOTE: Kelly Baigent / Luke Kneller
In 2021, Australian local authorities investigating multiple human deaths on a decommissioned nuclear test site, found several discarded cameras. The contents of those cameras, and the identities of the dead are classified: Top Secret. Anonymous whistle-blowers collated this footage, and when pieced together, it reveals: An enthusiastic group of young Sydney University academics travelling to the nuclear test site to analyse the radiation impact on the flora and fauna.