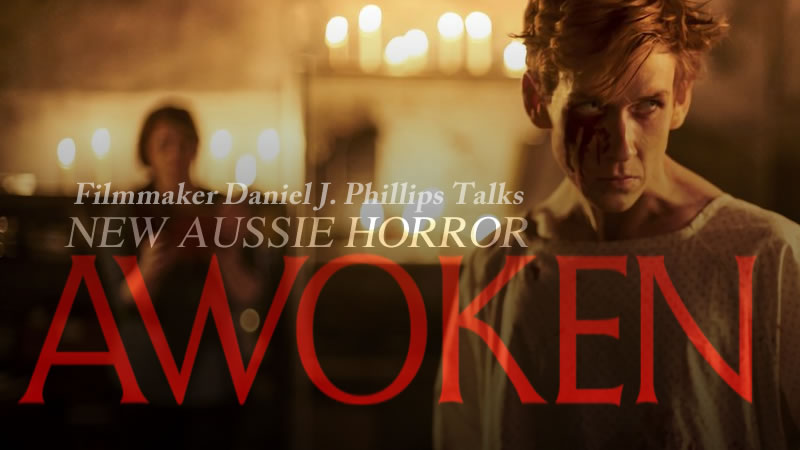 Umbrella Entertainment have just released the mystery-driven Aussie horror AWOKEN to DVD & VOD and we caught up with director/producer/writer Daniel J. Phillips to discuss his debut feature film.

AWOKEN follows Karla, a young medical student, is desperate to find a cure for a genetic, terminal sleep disorder affecting her brother Blake. She agrees to participate in experimental treatment being carried out in an abandoned underground hospital, led by trusted father-figure, Robert. She soon discovers long lost tapes that reveal sinister secrets about their mother’s death from the same genetic condition passed on to Blake, and after a series of terrifying and tragic events point to the supernatural, Karla – a self-professed atheist – comes to the conclusion that the only cure may be an exorcism. The person she trusts the most, however, has other ideas.

Have you always wanted to make horror movies? Is horror your favourite genre?

Not particularly, no. I love horror. I watch lots of [it] but I think for me, this particular story was just really interesting. I’m not necessarily just a “horror guy” – the unique story was more the reason I wanted to make this.

What about sleeping disorders interests you?

Sleeplessness leading to demonic possession is something I’ve never seen before. Certainly, I’ve read the story THE RUSSIAN SLEEP EXPERIMENT. I think that’s probably the closest thing I’ve seen similar to this premise. Most people in this day and age have trouble sleeping every once in a while – those weird moments where you feel like you hear something or see something because you’re just so tired. It’s taking that [idea] and making it this much bigger thing. It’s a cool way into the possession subgenre. I think that good horror films are genuinely well-trodden ground with a new premise that makes them something interesting. The idea of people walking down dark corridors and things jumping out at them has kind of been done. But if you can create a different way of having that fear work, then that’s pretty cool. 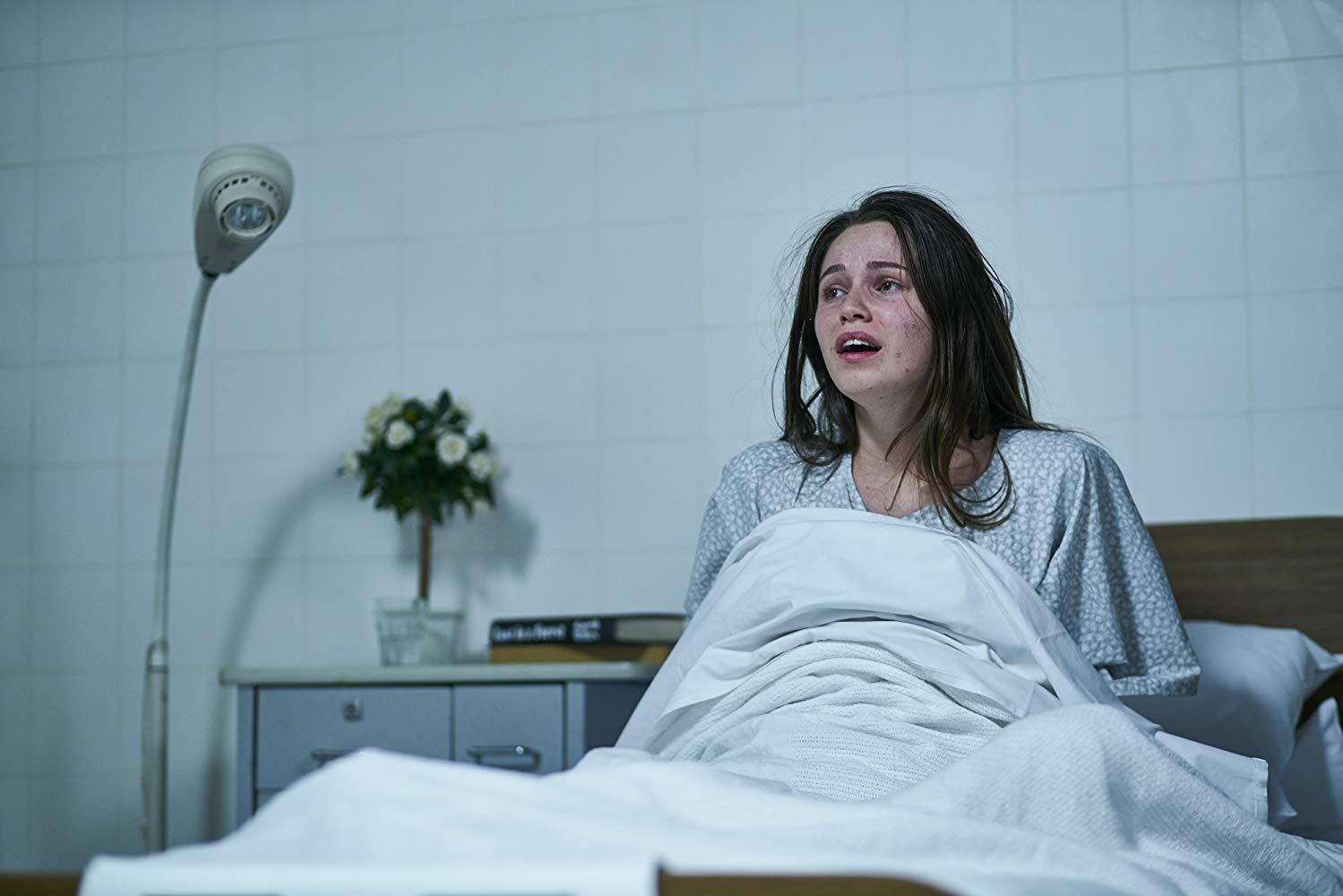 The demon Iddimu possesses people who are on the brink of being asleep and awake. How did you go about creating him?

When Alan, the co-writer, and I were figuring out what the personality and character of this thing were going to be, we did research and looked at a whole bunch of different things. There were some sleep demons that came up but their names just didn’t sound right. There were a few different ones that just weren’t going to translate to cinema in the way that we wanted so we created our own. The word Iddimu is a combination of words from Ancient Samaria that we took and added some letters to and played around with. And [we] created this thing – The Demon of Sleep.

We came up with the concept that God invented sleep specifically to keep you away from this thing: once upon a time, maybe humans didn’t need to sleep and then there was this bad influence on them that pulled them towards dark paths and God was like “OK, we need to do something about this – we’ll create this thing called sleep and that’ll stop this guy from taking them over.” That’s the mythology about Iddimu and how it works.

Early on in the film the theme of science/medicine versus religion is established. This is obviously a very real conflict that people have. Is it personal for you or Alan?

Alan did have a religious upbringing and had some experience with things like that. I certainly did not have any of that experience when I was younger and am not a religious person now.

We’ve gone heavy on faith because it’s a staple of the subgenre of possession movies – the Christianity or the Philosophism is very much intertwined with that. I don’t think any other religions would work as a combattant to some kind of demon. It feels like where it should be.

The main reason for including faith was to make sure that we had a really strong underpinning for the main characters. Just making sure the character had a nice arc and a nice theme that played into the story: she lost her faith, which is a very relatable and reasonable thing after her brother has this illness. Ironically that illness brings her faith back as well. 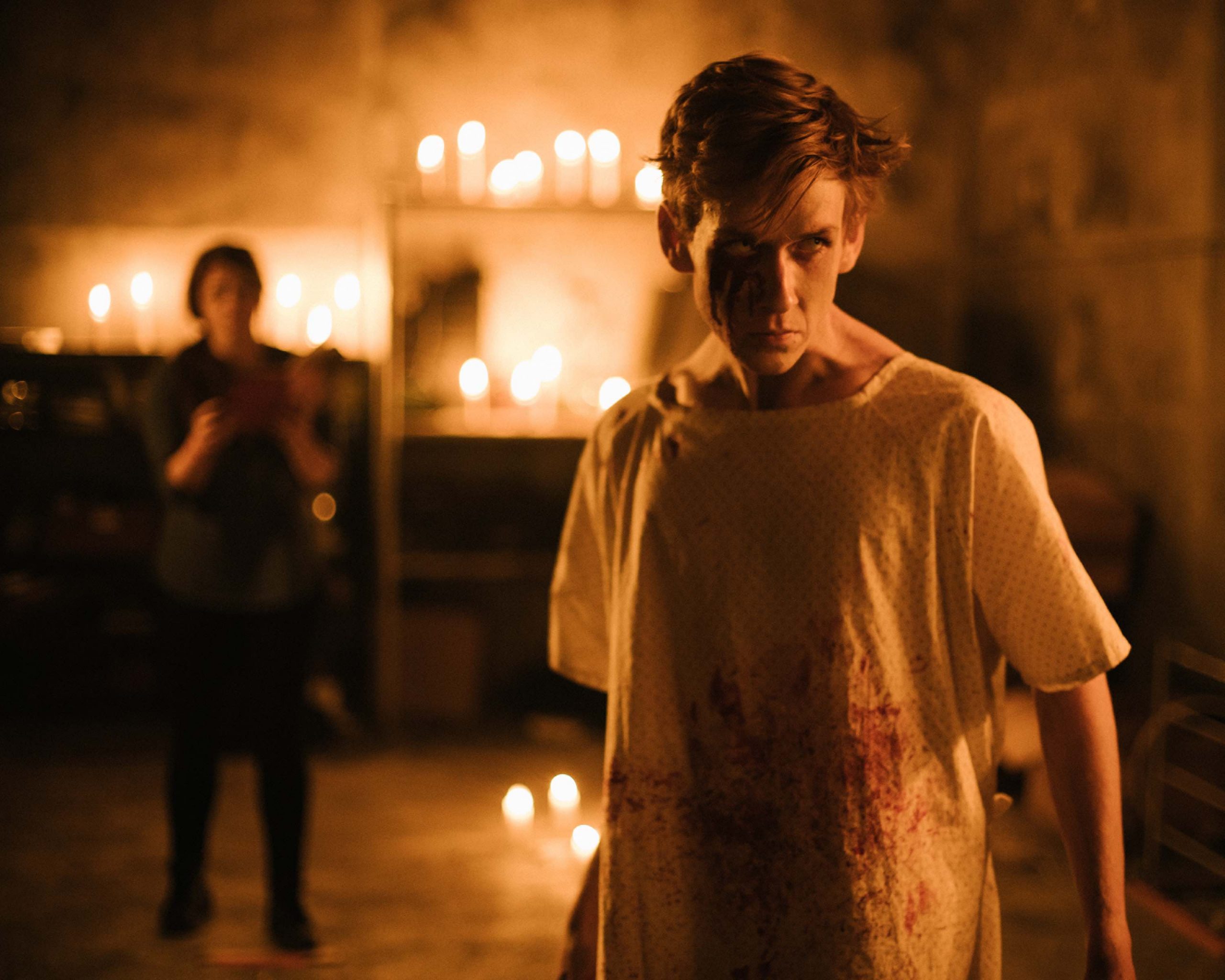 There are heavy religious themes but wasn’t as though the film was trying to send a message about it, so that’s a really strange review!

It’s pretty funny. People are just so angry on the internet all the time. They’re either in love with something or they absolutely hate something. And this guy… he really hated it. Like anything, there’s good reviews and bad reviews. Those first bad reviews always make you feel like you’re wasting your time and that you’re an imposter and you shouldn’t be doing what you’re doing – if you don’t get it perfect the first time, you’re worth nothing as an artist or filmmaker. There are some really nice reviews out there and the majority of the audience reviews are pretty positive. So, yeah… I’ll take the majority over the nuts who are thinking the movie was made by the church!

One thing I noticed is that Karla and Patrick’s love story never properly acts as a subplot or a reason for either of them to become distracted – are there any other horror tropes you purposely tried to avoid? Were there any you leaned into?

Absolutely. We wanted to make sure, in the script, that there were enough of the core ingredients that every horror fan wants from a horror. In regards to the romantic subplot, I think there’s something interesting about those [people] having this story that enriches their characters and where they’re going. It doesn’t have to end in them sleeping together or some big kissy moment. It was just this understanding that if they get out of this, something might happen – or something might not. It was more about them reconciling their pasts than getting together.

Also just in regards to the way that the women are depicted: I was pretty adamant not to sexualise them – not have these skimpy outfits and wet t-shirts – which is definitely a staple of the genre. So hopefully they come across as not too much from the male perspective and they’re strong, real people.

What was the decision to set the film in the USA?

People say “make it an Australian film so it doesn’t have to compete with American films that have so much more money in advantage!” But I wanted it to feel like another film they would see from a Hollywood studio, rather than a foreign film from a country where the character of the accent is one of the reasons they’re watching it.

If it was WOLF CREEK, which is very Australian, and you did that with American accents, you’d be crazy. But because [AWOKEN] is more a universal story, it works with the American accent. 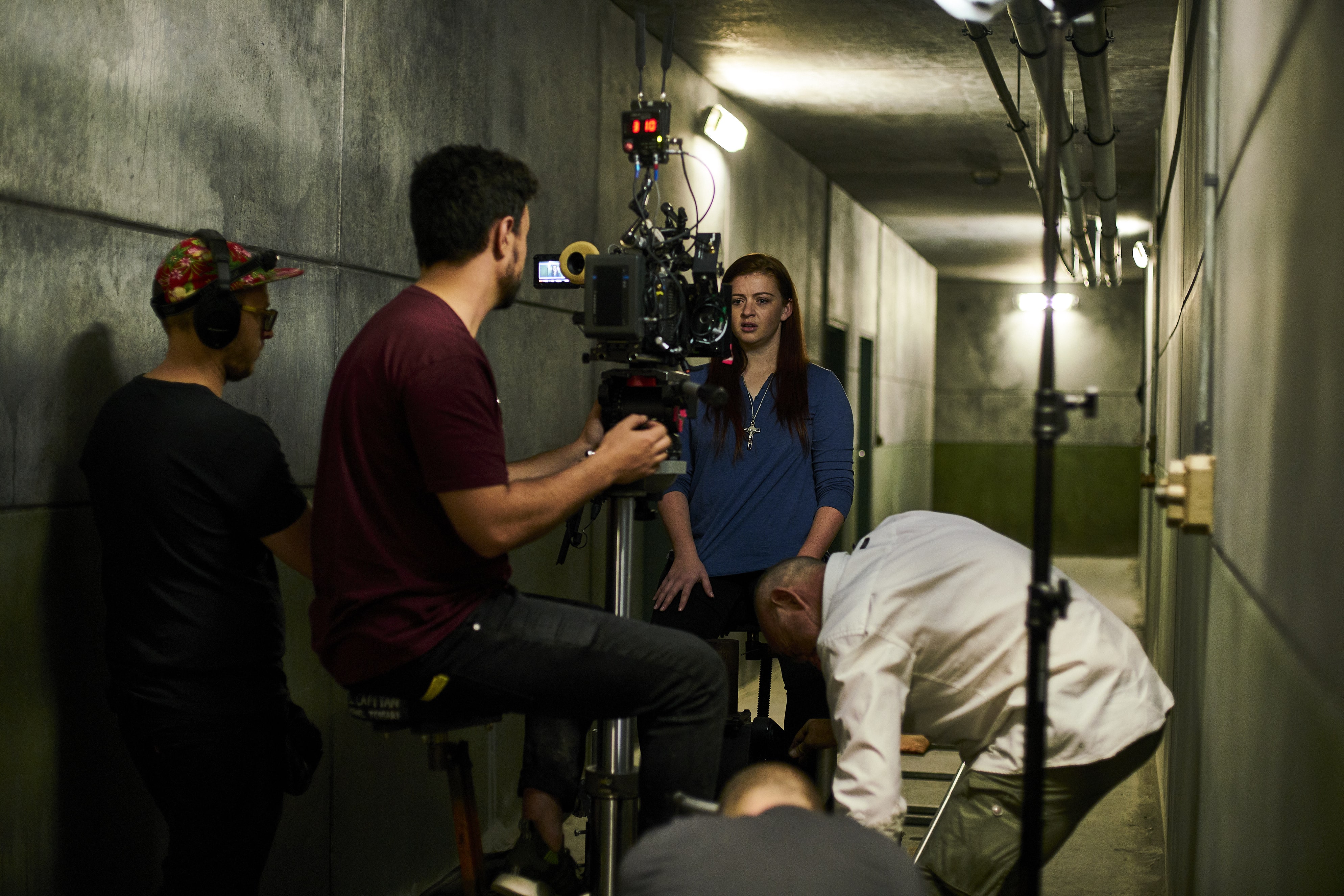 You co-wrote the screenplay for AWOKEN with Alan Grace. Did it take a long time to do this?

Yes, it did. We developed some stuff early on and the first direction we went in was just really all over the place and really misguided. It wasn’t the type of movie we wanted to make. Inevitably, when you write a script, it’s always unbelievably complicated at the beginning and you end up stripping it back to it’s simplest. There were all kinds of crazy shit in there at the beginning!

It took six years to get to this point – four years of development on the script. It was a long process. It wasn’t about making the script and doing different drafts of the idea we have now – we’d write a movie that would be a completely different film and then realise “this isn’t what we want to make, let’s try again” until we eventually got to where it is now.

So the co-writing process was beneficial in this instance? Would you do it again?

Oh, yes. Absolutely. There are some stories I want to work on by myself as a writer. But, especially for the genre stuff, I think working with a co-writer is hugely beneficial. I’m a better director than I am a writer: I know story and I know structure, but I suck a dialogue. Just being able to bounce ideas off someone… You can come up with more of a unique voice: you’re pressure-testing each other’s work all the time, pushing each other to be better. Especially when you get into production where you’re focusing on other things, it’s nice to have another writer to help through that process. I think it’s a great way to work.

Where do you hope AWOKEN takes you as a director?

I’m attached to a bunch of horror films – some in the US, some here. I’m attached to a drama here and some other stuff. I’m hoping it’s a calling card that gets me my second movie. And then if my second movie gets me my third movie, and so on. That’s all I can hope for. I don’t want to be pigeon-holed as a horror director, but also I have no problem making another horror movie. I love horror and think I get how it works – I hope! – so I’d jump into something like that straight away as well, for sure.