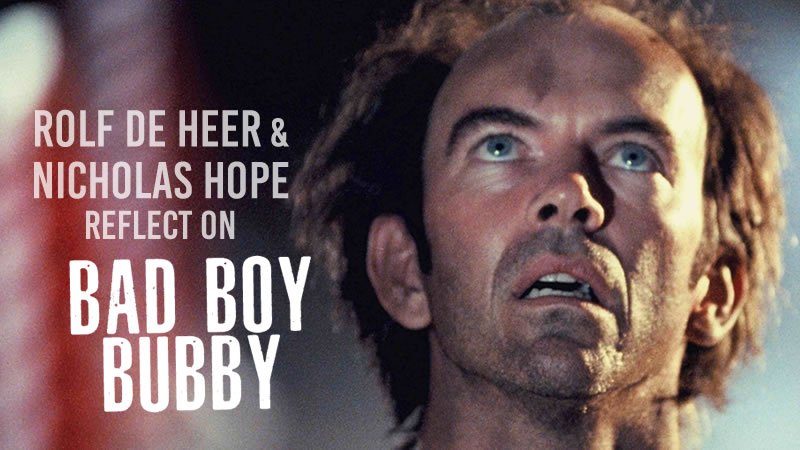 There are few Australian films as polarising as BAD BOY BUBBY; a fact reaffirmed by a retrospective screening a few years back when a distraught woman stood up and chastised the entire audience, calling them perverts and storming out of the cinema. Director Rolf de Heer and the film’s star Nicholas Hope recently sat down with us to discuss the film, with Rolf musing on that unforgettable moment.

“I would have much preferred the lady to have sat through it and thought about it calmly” to which he elaborates on a particular accolade awarded to the film upon its release. “At the Venice Film Festival it won an ecumenical award by the religious jury. And I believe that they were deeply divided whether to give it this religious award or whether not to and if it should be damned or it should be praised. They talked about it for a long time and in the end they came to a consensus that its morality is strong enough. And that, for me, is where it sits, and yes there are a lot of things in it that make you think about it one way or another, and the thing is, everybody sees a different film. I know that Bubby delights people to this day, and it also horrifies people to this day. And I think it’s lovely that it does because that means that it’s something of lasting value.”

But what does Bubby think of all this? Nicholas offers a lasting memory of one of the film’s earliest screenings. “The very first screening in Norway, the person who was screening it, got up and said ‘please remember you are allowed to laugh’. And I actually think that is one of the reasons it did well. That audience laughed at a lot of the uncomfortable bits, because they’re so bizarre, and had been set up to unconsciously know that that first section of the film is going to go somewhere else. And I think that also created a word of mouth.” 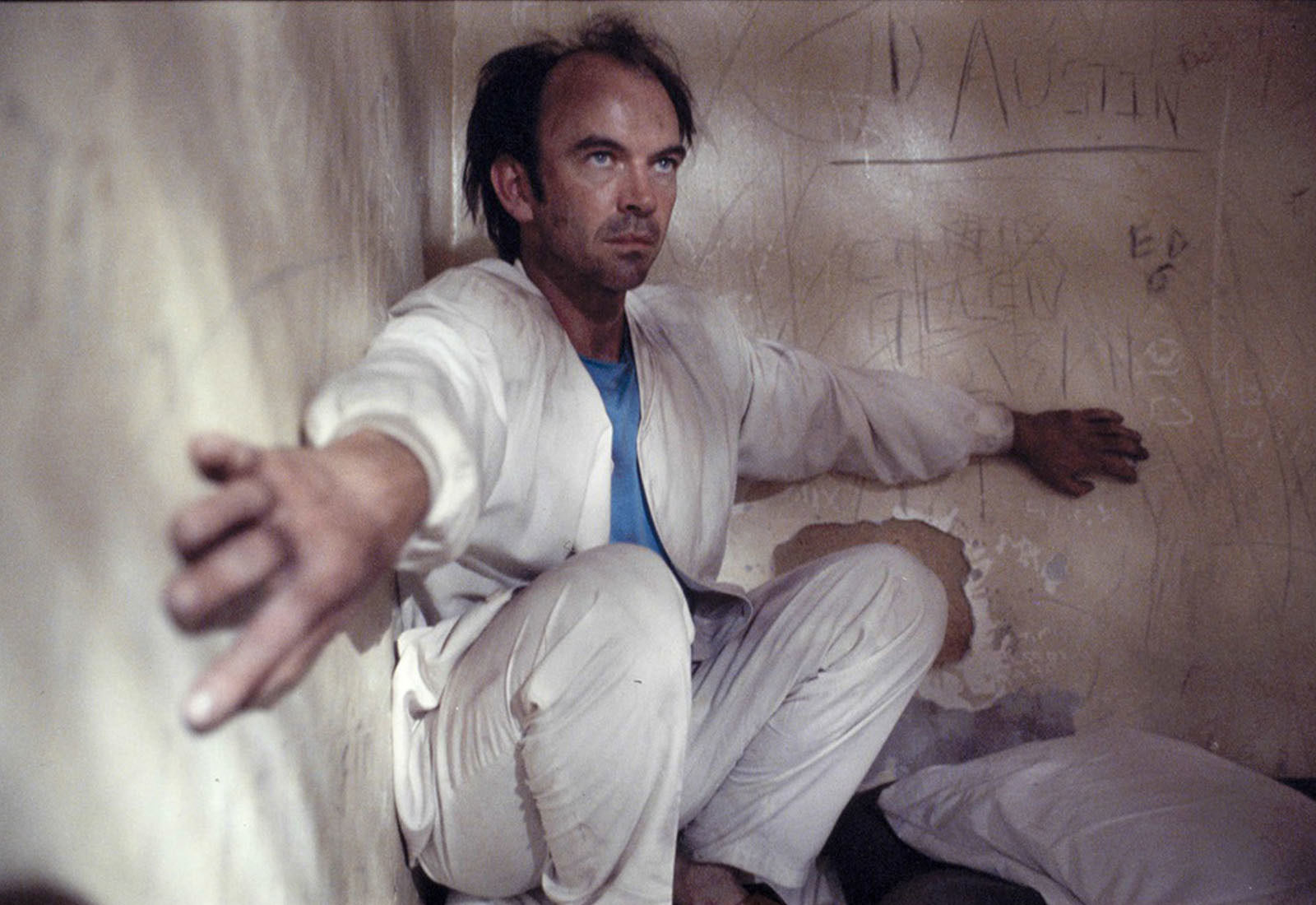 Upon its release in 1993 renowned film critic David Statton also declared BAD BOY BUBBY to be a milestone of Australian cinema. High praise indeed from the same man who just one year prior had denounced Geoffrey Wright’s ROMPER STOMPER as a blemish on the Australian cinematic landscape. Of course the two films are quite different in many ways, and yet both are regarded to be amongst the most notorious and confrontational this country has ever produced. When asked about the critical reception of BAD BOY BUBBY, Nicholas admits that he wasn’t entirely surprised.

“I can’t speak for Rolf but I was really naïve at the time. I recognised that the script was something quite amazing but I have to admit that I was just over that moon that I was in it. You know, my first feature role was the lead in something which was the kind of film that I would like to watch. That was, more or less, as far as it went for me at the time.” and with a hesitant pause and a cringed look on his face, he adds “The responses that it got, it’s painful to say it, it was a surprise but it was an egocentric surprise for me more than anything else. For quite some time I was just taken up in that world of ‘how wonderful this is happening to me’.” He also adds with a laugh “I don’t think that served me particularly well.”

Those who have seen the film will know just how jarring a viewing experience BAD BOY BUBBY is and much of that disorienting and kinetic aesthetic is owed to de Heer’s unorthodox methods whereby 32 cinematographers were engaged. With none of the cinematographers permitted to view the other’s footage, the result is a confronting view of the world as seen through the eyes of Bubby, whose entire life had been spent confined to squalid captivity.

It is an exceptional benchmark for Australian cinema, of which Nicholas reflects. “At the time I wasn’t even aware what the director of photography actually meant. It just meant that a few people were coming in each day saying ‘we’re going to do this’, and they were taking control. And I thought ‘this is great’. And suddenly there were more restrictions and you had to find ways within the restriction, and sometimes restriction can actually give you more freedom.”

And with that Rolf elaborates on the experimental nature of his work, why no two films of his are alike, and why the space between his previous film DINGO and BAD BOY BUBBY was a life-altering moment for him. In terms of no two films being alike Rolf says “It’s something that happens quite naturally, I’ve worked out over the years. Because what happens is I do a film and it’s all consuming, it’s everything. You know, to make it good with limited resources, you get one chance at it. So you put everything into it and then when you get to the end of it that last thing you want to do is the same thing again. So the things that I am then attracted to for the next one are usually quite different. It’s like every film is a reaction to the previous one.” 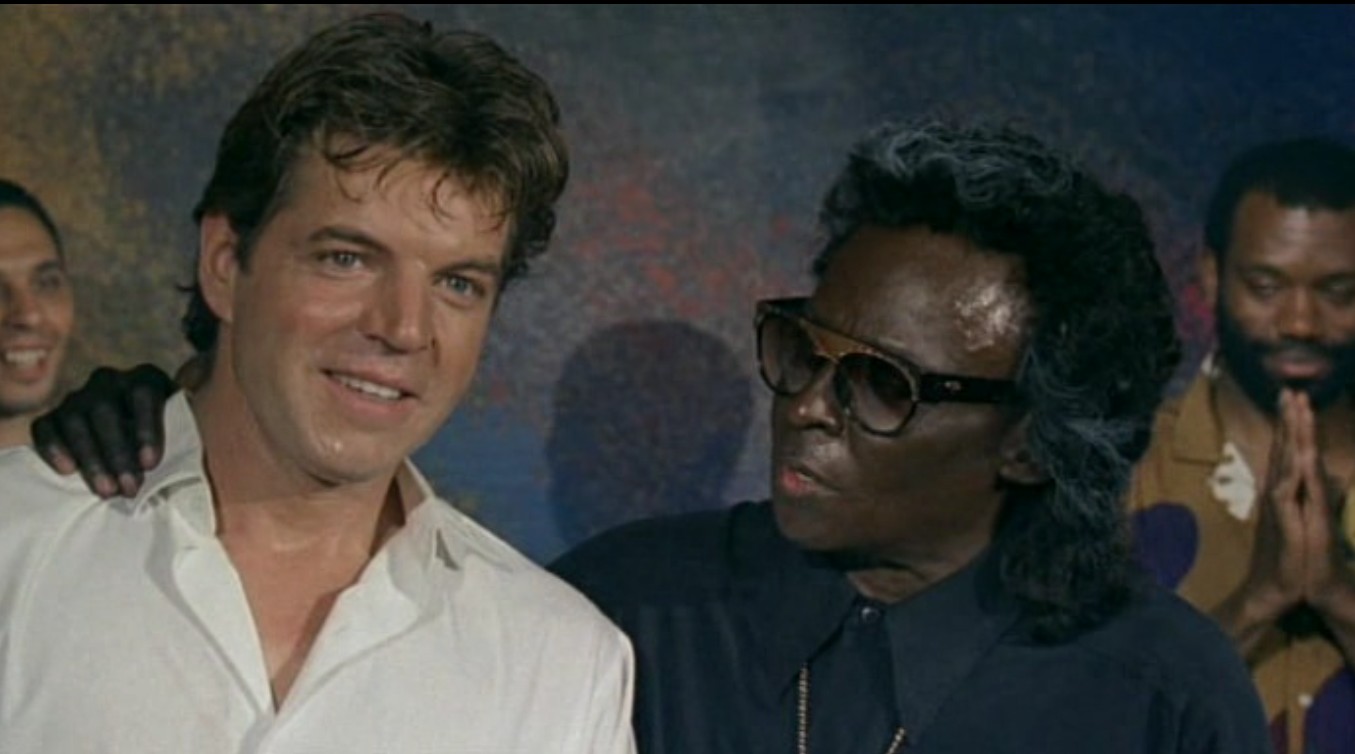 And in that time between DINGO and BAD BOY BUBBY, Rolf came to a fundamental realisation. “DINGO was a turning point in my life and it ended my career. I stopped, after DINGO, having a career and after that I made films that I cared about. I didn’t have a career, I was on a trajectory. I got to DINGO and I thought ‘That’s it. This is not the way to do films, let’s do them a different way. I am proud of DINGO but it cost too much to too many people.”

Given that DINGO and BAD BOY BUBBY mark such an fundamental juncture in his career, it would seem serendipitous that both films have been treated to all-new restorations and subsequent Blu-ray releases from Umbrella Entertainment, who have catalogued them within two of their imprints. DINGO is now available as part of the Sunburnt Screens line while BAD BOY BUBBY proudly resides among the Beyond Genres series. We asked Rolf for his thoughts on the preservation of his films and his response was of high praise. “I was particularly thrilled a few years ago when they got a preservation on the film end of things at the NSFA, which is what – in a sense – has allowed this new digital preservation to be so much the better.”