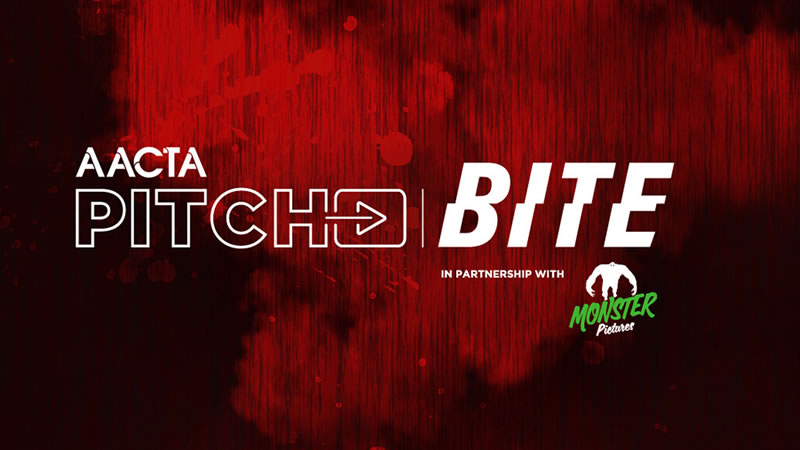 AACTA Pitch: BITE in Partnership with Monster Pictures, is Australia’s ultimate horror and genre film development initiative focusing on original horror or elevated genre feature film concepts. Last year’s theme drew on the topical subject of isolation. This year we are pushing the genre even further with the theme BITE. This can be literal; as in a creature feature, monsters, zombies, critters and cannibals or metaphorical, as in to “take the bait”. Just so long as the theme resonates strongly with the many ways the word “bite” can be interpreted and used creatively.

The Australian Academy of Cinema and Television Arts (AACTA) in partnership with Monster Pictures invites writers, directors and writer/director teams to submit original feature film concepts that incorporate the theme of BITE. Keeping in line with the overall spirit of the initiative, the project ideas must work effectively with minimal locations, small casts and lower budgets.

Monster Pictures company director Grant Hardie expresses that “after such a successful competition last year, Monster Pictures is really looking forward to sinking our teeth into this year’s initiative. We’re really proud of the of the success of 2020 and hope that 2021 is serves us up some bigger and tastier projects!”

Last year’s initiative focused on developing original horror and elevated genre feature film concepts and saw a staggering amount of entries with close to 200 submissions received in the opening round. Ultimately eight projects were selected to compete against one another in a live-streamed pitching final at AACTA ScreenFest 2020. In fact, Grant Hardie was so impressed with some of these concepts that, following the 2020 competition, Monster Pictures in partnership with Chris Brown’s production company PICTURES IN PARADISE, optioned five of the other first round finalists’ projects. They are now working with the teams to develop their projects and take them to market.

One of the projects, Aaron McCann’s JONESY, was selected as one of the 20 finalists to participate in the Frontières International Co-Production Market. Aaron pitched the project to producers, sales agents, distributors and financiers from around the globe at the Fantasia International Film Festival in Montreal in August generating strong interest in the market.

With a new theme and new slate of judges, this year is shaping up to be even bigger.

The Top 20 submissions will be required to provide a Pitch Deck, Audience engagement and Marketing Plan, Sizzle Reel, and concept art.

Take part in the AACTA Pitch: BITE in Partnership with Monster Pictures, entry details and requirements can be found here.