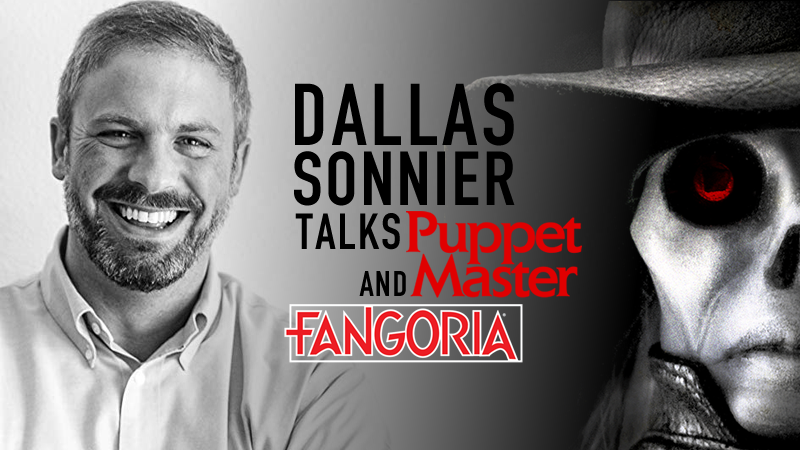 Over the last decade, Dallas Sonnier has left a significant mark on modern cinema with countless credits on memorable genre films and his continued support in bringing S. Craig Zahler’s challenging and blood-soaked visions to the screen. Without his willingness to support such emerging talent, it’s unlikely we would have seen such acclaimed and audience-adored ‘artsploitation’ films as BONE TOMAHAWK and BRAWL IN CELL BLOCK 99.

Sonnier has just taken his support of genre cinema to the next level with his decision to purchase and revive the iconic horror magazine FANGORIA.

Not only is he bringing FANGORIA back as a print magazine, Sonnier has also decided to resurrect ‘Fangoria Presents’ to produce and distribute genre films. The first project to be released under the banner will be beloved franchise favourite PUPPET MASTER: THE LITTLEST REICH, that acts as both a sequel, a reboot and an absolutely over-the-top, politically-incorrect gore-fest!

In the lead up to the Australian Premiere of PUPPET MASTER: THE LITTLEST REICH at the Sydney Underground Film Festival, we caught up with Sonnier to discuss putting everything on the line to support Zahler, what we can expect from the new FANGORIA and why people still have so much love for a decades-old horror mag!

Given your decision to resurrect FANGORIA, clearly the magazine obviously means a lot to you (as it does to most horror fans). What’s your personal history with it?

I read FANGORIA as a kid, when I’d go to the bookstore with my dad. I’d read football magazines, PREMIER and FANGORIA. The first issue I read would have been some time in the late eighties, though I don’t recall exactly which one it was. THE LOST BOYS issue really resonated with me though, because it’s a movie I was obsessed with back then (and still am).

What are you hoping to achieve with the revamped FANGORIA, and why do you think it still resonates with so many horror fans today?

The name continues to resonate with so many people because of what the name meant and what the magazine achieved. Before the internet, one of the only ways you could learn about the behind-the-scenes working of horror movies was through FANGORIA. It was one of the first and one of the only magazines to print behind-the-scenes photos and interviews about the making of horror movies. FANGORIA was how entire generations of horror fans first heard about what would become their favourite horror movie, and it’s where generations of special-effects artists first learned about and fell in love with the craft. That’s a personal connection and relevance that doesn’t go away with age.

FANGORIA has been around for nearly four decades now. How will you pay tribute to this legacy while ensuring the mag is relevant to the modern horror landscape?

If you make a quality product, people will connect with it. FANGORIA was always about being a magazine that connected with the fans and introduced them to unique new voices in the horror world, gave them great behind-the-scenes stories and photos, and provided them with hours of reading enjoyment. Those are all timeless qualities, and they’re qualities that we’re going to bring back to the magazine.  We’re going to put the heart and soul of the magazine back into it.

Your production work, and now your involvement with Fangoria, obviously attest to your love of horror – what can you tell us about your personal horror taste?

As I’ve already mentioned, and as anyone who knows me can attest, THE LOST BOYS was and remains one of my all-time favourite movies. I’m obsessed with John Carpenter’s THE THING, and THE EXORCIST III. I’m also deeply influenced by a lot of 1990s horror: SCREAM, IN THE MOUTH OF MADNESS, EVENT HORIZON, TALES FROM THE CRYPT: DEMON KNIGHT, NIGHTBREED. In more recent years, I’ve really been impressed by DON’T BREATH and THE CONJURING, PARANORMAL ACTIVITY and 28 WEEKS LATER (which I thought was better than the first). I also love THE EVIL DEAD franchise, and I’ll fight anyone over my love for Rob Zombie.

Through your production company, CINESTATE, you’ve had a great deal of success producing bold genre-pushing projects. Why are you drawn to this type of filmmaking?

Our unique selling point is that what you are watching on screen is a creatively unfiltered movie, not overly processed by business decisions made out of fear of losing money or losing your job at the studio.  We believe that renegade attitude towards supporting the writer and director should be innate and will ultimately lead to financial success because audiences will reward authentic experiences.

Many of those bold projects (like BONE TOMAHAWK and BRAWL IN CELL BLOCK 99) have been directed by S. Craig Zahler. Can you talk about your collaboration with him, or give any insight into the upcoming DRAGGED ACROSS CONCRETE?

I took a huge bet on Zahler and mortgaged my house to make BONE TOMAHAWK. Ever since, we’ve been an inseparable team, and had another success with BRAWL IN CELL BLOCK 99. DRAGGED ACROSS CONCRETE is the ultimate in Zahler’s continuing interest in complicated characters and unlikely plotting, and the performances from Mel Gibson and Vince Vaughn are absolutely superb.

Why did you choose PUPPET MASTER: THE LITTLEST REICH as your first ‘Fangoria Presents’ feature?

I first saw the original PUPPET MASTER when my Aunt Missy let me rent it from the Albertson’s video store after Thanksgiving 1989. It’s held a special place in my memory ever since, as it has with the countless lifelong fans who had a similar experience with the franchise when they were younger. I’ve always thought it would be great fun to reinvent the franchise and was lucky enough to befriend Charles Band and get him to agree. In terms of PUPPET MASTER: THE LITTLEST REICH’s debut as the first ‘Fangoria Presents’ film, truth be told that was a bit of a fluke. During post-production, we also acquired FANGORIA, and it was obvious that PUPPET MASTER was a natural fit and the timing was perfect, so we decided to rebrand it under the label.

Having seen PUPPET MASTER: THE LITTLEST REICH, I can attest to the fact that it’s gleefully blood-soaked and 100% politically incorrect. This style reminded me of FANGORIA’s sister publication GOREZONE, which tended to cover the bloodier/weirder corners of horror. Any plans to bring back this mag too, or import this focus into the new FANGORIA?

While we obtained the rights to GOREZONE in our acquisition of FANGORIA, our current focus is on putting all of our love and attention into Fango. That being said, FANGORIA always had an emphasis itself on gore and special effects, and we’re definitely going to be bringing that back, with gory behind-the-scenes photos as well as DIY tutorials so fans can learn how to replicate their favourite special effects themselves.

You’ve stated FANGORIA will take the form of a deluxe quarterly print edition – can you go into detail on what it will look like? And why print over digital?

I’ve compared what the new FANGORIA will look like to being north of a magazine, south of a coffee-table book. It’s going to be 100 pages and perfectly bound – a true collector’s item. From the beginning, our intention was always to make this an ‘analog’ experience. We’re friends with several of the genre bloggers like Bloody Disgusting and Dread Central, and they’re doing a great job of covering the news cycle and we don’t have any interest in competing with them. We want to focus on things that are timeless and not timely. We also want to sort of jam an ice pick into the Matrix, as it were. To get people to log offline, sit down with a nice cup of coffee, and enjoy a completely old-school, analog experience, the way readers of FANGORIA would have back in the 70s and 80s.

You’ve hinted at some amazing FANGORIA contributors already, including Zahler and Grady Hendrix alongside old-school contributors like Michael Gingold. How will you choose your writers, and can you give us any hints about who else we can expect to see contributing?

We are approaching the resurrection of FANGORIA with the horror community at the forefront of our decision making. The task of breathing life back into FANGORIA is an incredible opportunity, and we see this experience as our one shot to make it right. We want to not only satisfy the die-hards and the black t-shirt club folks, but we also see an opportunity to invite a new generation to the celebration.With the recent successes of films like GET OUT and IT (2017) into mainstream media,  FANGORIA’s obligation is to provide thoughtful and insightful pieces on the horror genre.

We are honouring the old Fango team by spotlighting writers like Timpone and Gingold while bringing in new writers who are thoughtful in their approach and represent unique perspectives. In the new issues, we will showcase deep-dive retrospective pieces, the classic gore SFX pieces folks have come to know and love, and will surprise audiences with articles from well-known members of the horror community.

Don’t miss your chance to check out the first ‘Fangoria Presents’ film, PUPPET MASTER: THE LITTLEST REICH, in its Australian Premiere at Sydney Underground Film Festival on Saturday September 15th, with screenings to follow at Monster Fest Travelling Sideshow Perth and Monster Fest Melbourne in the coming months.