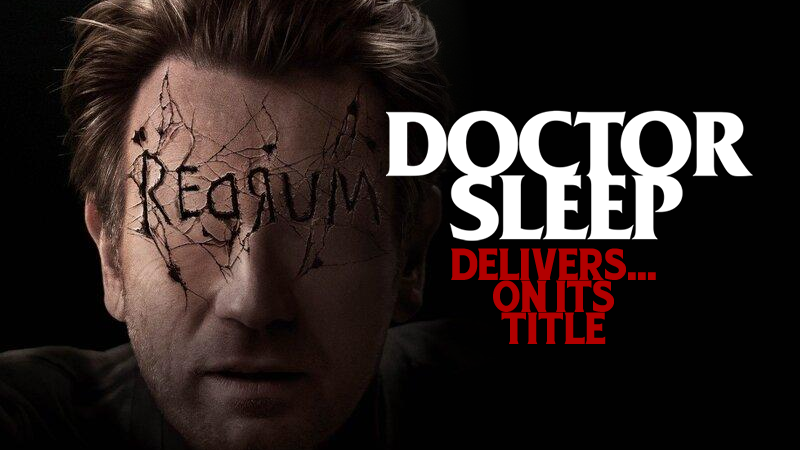 Genre stalwart Mike Flanagan (THE HAUNTING OF HILL HOUSE, OCULUS) helms this adaption of Stephen King’s 2013 novel DOCTOR SLEEP, the long awaited follow-up to King’s own best-selling 1977 novel, THE SHINING. From the outset its apparent that perhaps Flanagan has bitten off more than he can chew as rather than merely adapt King’s novel, he’s chosen to do so within the cinematic landscape from which Stanley Kubrick’s 1980 adaptation of THE SHINING is based. Rather than recycle footage from Kubrick’s film, Flanagan chooses to reenact several key sequences and expand upon it in others using actors with a similar likeness and Kubrick’s cinematic aesthetic from production design right down to score. The aforementioned seems like a critical misstep as rather than author something that can stand on its own, it constantly feels both entrapped and indebted to Kubrick’s classic, subsequently it has much larger expectation to live up to. 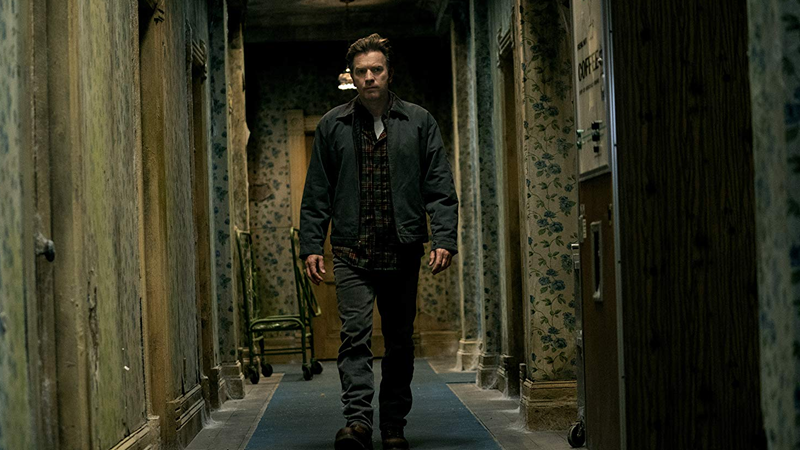 DOCTOR SLEEP follows Danny Torrance (Ewan McGregor, TRAINSPOTTING) some forty years after the events of the first film, who has tried to hide his ‘shine’ to the best of his abilities from himself and others through a transient lifestyle of moving about and heavy substance abuse. However when he meets Billy (Cliff Curtis, FEAR THE WALKING DEAD) who sees something of himself in Danny, he cleans up and begins to channel his ‘shine’ toward the greater good. Danny’s new path is soon thwarted when Abra (Kyliegh Curran), a young teen with a similar though stronger ‘shine’ ability, begins communicating with him telepathically. Abra’s gift has her witnessing (via telepathy) the brutal killings of young children by a gang known as the True Knot, lead by Rose the Hat (Rebecca Ferguson, THE GREATEST SHOWMAN), who feed on the fear, pain and death of children with ‘shine’ abilities. Abra & Danny join forces to bring about the end of the malevolent group in a finale that sees Danny confront his past and its demons at the Overlook Hotel. 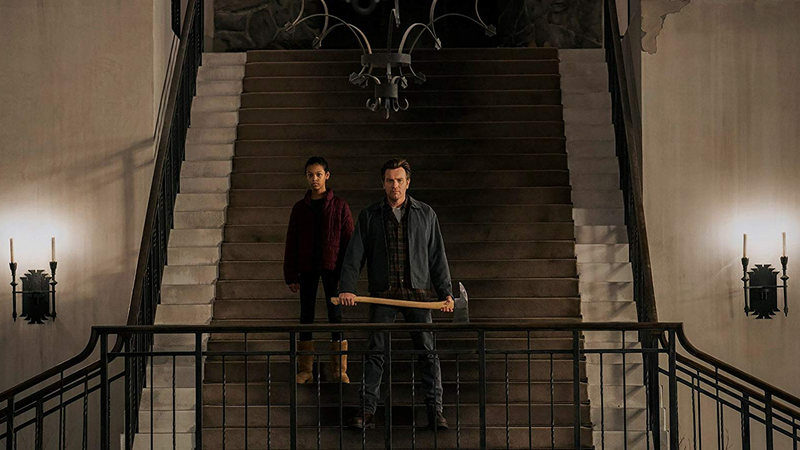 Despite an interesting though not entirely original premise, DOCTOR SLEEP’s screenplay suffers from an odd balance of trying to squeeze too much in yet padding it out, there are characters and scenes within it that serve little purpose to the plot than to merely pilfer screen time, Flanagan’s decision to keep them often feels like unnecessary fan service (to both King and fans of his novel). Character depth is significantly lacking and rather than shape them within the experiences or context of this story, they are loosely rounded with heavy-handed exposition, often served through gimmicky exchanges. Notwithstanding flashbacks, DOCTOR SLEEP’s plotting is primarily linear and what a slog, at two and a half hours long, one would presume there would be an epic build or at the very least creeping suspense but there’s not, just elongated scenes that slowly crawl toward an anti-climatic and predictable finale, that may have you nodding off from time to time, somewhat delivering on the promise of the film’s title. 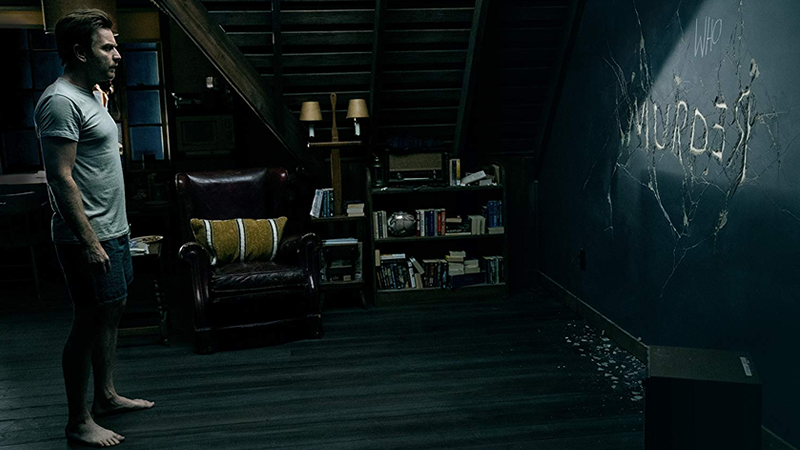 Harking back to the point that Flanagan has done himself the injustice of setting his adaptation within an already established cinematic universe, is the fact that his visual approach lacks the passion, ingenuity and spectacle of Kubrick’s visionary work.

McGregor turns in a serviceable performance with the material he has to work with and had it been a lesser actor the cracks in the script would be visibly greater. Roger Dale Floyd who portrays the young Danny Torrance lacks the screen presence, charm and creepiness of Kubrick’s original player Danny Lloyd, and while his efforts are not without merit, they are just merely bettered by Lloyd’s previously outstanding performance. Curran’s portrayal of Abra is somewhat stilted, never really connecting with the character and while she is no doubt bound for big things, DOCTOR SLEEP is not a satisfactory measure of what she’s possible of. Finally Ferguson as the antagonist comes off more as a villain from TV’s CHARMED than anything from the pen of King, her performance is steeped in caricature and drenched with hokey costuming, a genuinely underwhelming adversary. 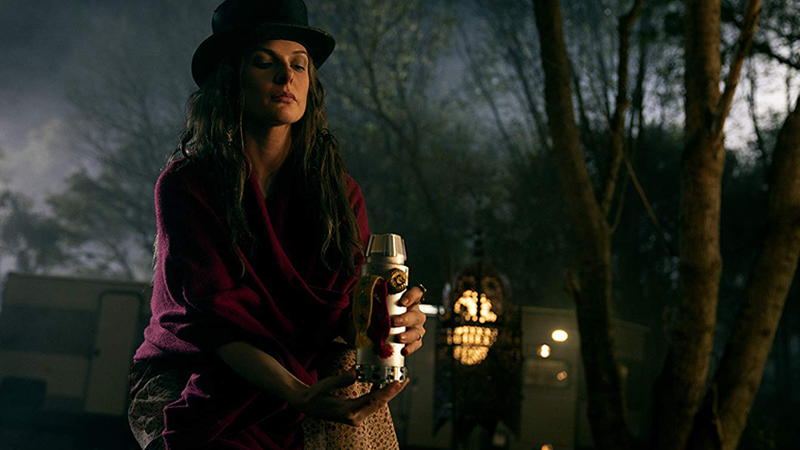 Flanagan’s DOCTOR SLEEP is not entirely bad, its just thoroughly underwhelming, had he made the call to set it within its own cinematic universe and do away with its sycophantic approach, it would have fared better. Perhaps also the source may have been more suited to a mini-series (and at its current runtime its almost there) where the expectation would be significantly less and more care could have been applied to doing it justice by exploring subplots to strengthen the narrative and the characters within it. 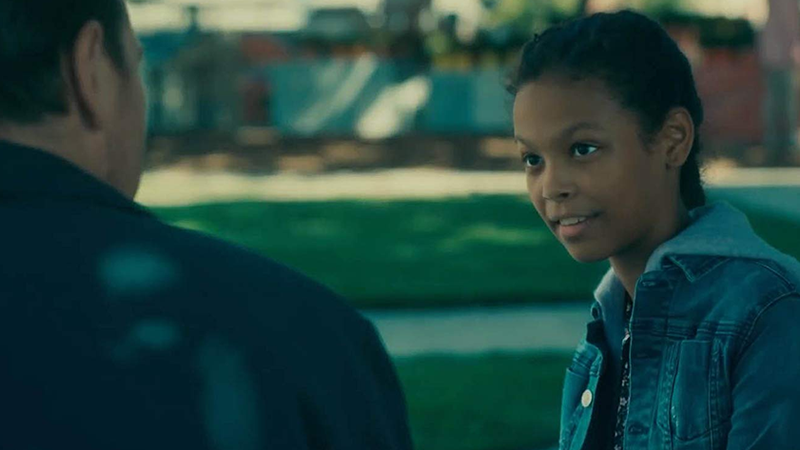 If there’s one major positivity to come from DOCTOR SLEEP, its the reassurance that Kubrick’s THE SHINING is a true masterpiece that can stand on its own irrespective of its commitment to source and hopefully with this new film in cinemas it may draw a new legion of fans.

DOCTOR SLEEP is now showing in cinemas across Australia.