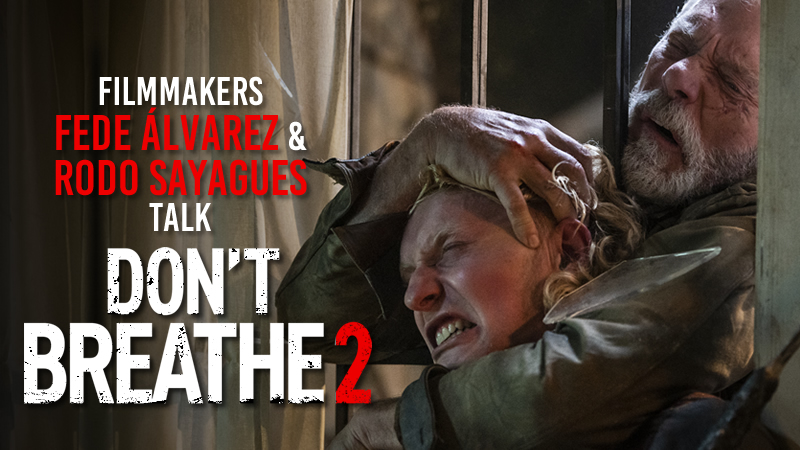 Five years after the breakout success of DON’T BREATHE, Fede Alvarez returns to produce the follow-up to 2016 box office hit with co-writer Rodo Sayagues stepping into the director’s chair with DON’T BREATHE 2.

DON’T BREATHE 2 is set in the years following the initial deadly home invasion, where Norman ‘ The Blind Man’ Nordstrom (Stephen Lang) lives in quiet solace until his past sins catch up with him. 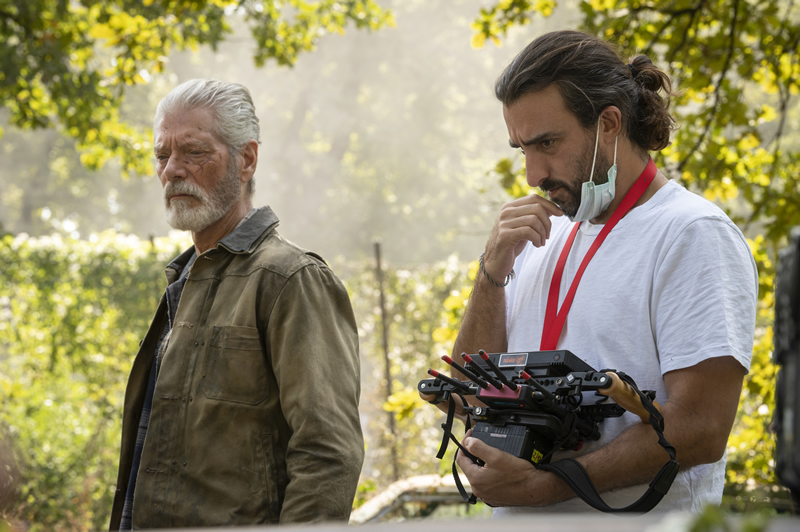 Monster’s Jarret Gahan caught up with Fede & Rodo to discuss the film and their approach to filmmaking.

First off, congratulations on DON’T BREATHE 2. It’s a rare breed of sequel, in that it equals, if not betters, the original. It ups the ante in terms of suspense, character development and has some incredible set pieces. The thing I like most about the sequel, is its approach to storytelling. In that, you’ve taken the antagonist of the first film, and made him the protagonist in this instalment. Was that difficult, to take the troubling past that we learnt of ‘The Blind Man’, from the first film, and balance that with his role as the father figure-like protector in this sequel?

Then yes, we felt we needed to make sure that we were faithful to the nature of who this person is. The reason why we decided to tell this particular story was because in the first one, he did horrible things, and he was a villain that got away with it. He survived and didn’t pay for his crime. So we thought we needed to put in the story, just in one part, to see if justice was going to happen, see if he was going to ever pay for the crimes he did or not? But also more importantly, or equally important, on a character level, to see if he was going to stop being the blind man, in a way. Because when we talk about him as a blind man, is it has nothing to do with his sight. It has to do with the fact that he’s just completely blind to the reality of who he truly is. He has his own sense of what’s right or wrong. He justify everything he does in the first movie, with very convincing arguments, but he’s lying to no one but himself.

You’ve seen the movies, so you know if that happens or it doesn’t. But that is what’s interesting, because something like that transcend villains, heroes, that transcends all that. It’s about humanity. It’s about all of us. The thing that most of us are more afraid of, even if you’re not aware, is yourself. It’s what’s in yourself, and who are you, truly. And most of us will be terrified to find out something about ourself, that is not in line to what we thought we were. Who we thought we were.

So, It’s about the character coming to terms who he truly is, and daring to face that, and accepting the consequences of that, hopefully. So that’s why we need to make him the protagonist in this story. In a technical level, really, Phoenix is the protagonist, but we need to put it, at least put him a more protagonist  place, to allow the audience to go on that journey with him, and see if that was possible. If a villain will ever see the truth about who he truly is. 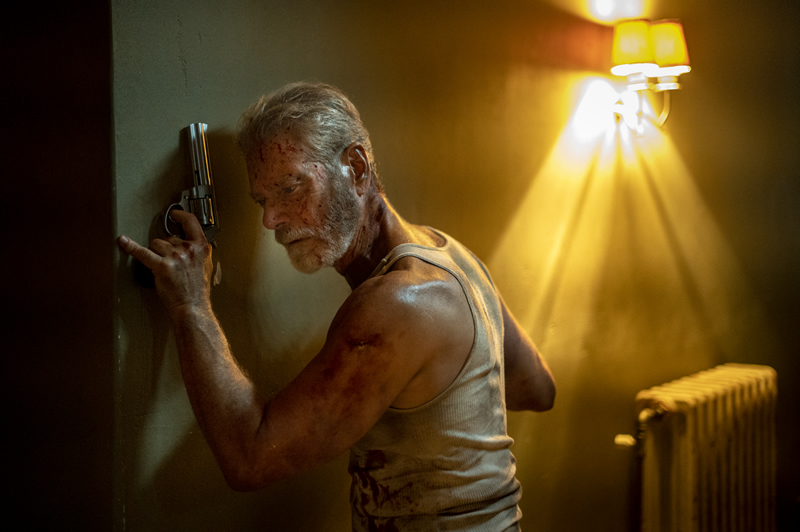 Rodo Sayagues: We never thought of it in terms of who you’re rooting for. It’s not about who you root for, or it’s not even about, what’s your view on these characters? How do you judge these characters? The important thing for us, was what Fede was saying, just to witness that journey. Just to witness that character undertaking that journey, and that arc. That’s the whole point. And then it’s just, pose that question, and put it out there, and let people decide how they feel about it.

Fede Alverez: They are fables. This is not based on a true story. This is a fable, and it represents things that go beyond the facts of his story.

Yeah. I think it’s terrific to see the depth of character, and to learn that ‘The Blind Man’ is this anti-villain. I like the fact that he’s forced to acknowledge his flaws, his troubled history and that he has a pretty accurate view of himself.

Now, as frequent collaborators, with one another, how does the creative dynamic actually work, when it comes to writing the screenplay?

Fede Alverez: We wish we had a method.

Rodo Sayagues: We don’t have a method. 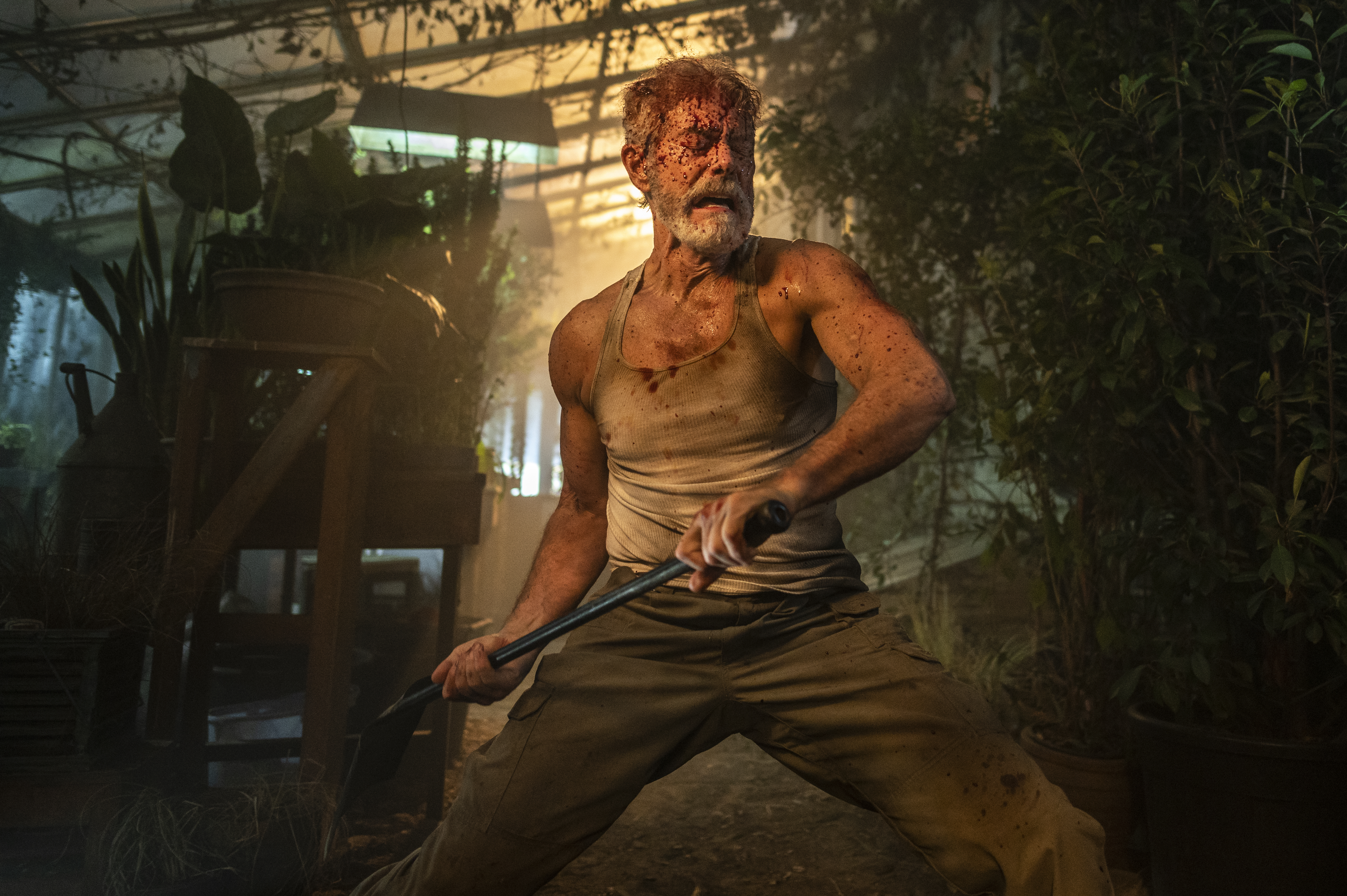 When we thinking about this things, as bleak as they look on the screen, they sound like comedies. My wife always say, “If anybody will see you, think like you’re working on comedies, because you’re laughing every step of the way“. What about this? What about that? But there’s a lot of, just that process of really, really pushing ourselves, to try to tell a tale, that has not been told a million times, which is the issue with Hollywood movies in general. They might look original a lot of times, but at the core, it’s the same story, over and over, and over and over, again.

Fede Alverez: So we really push ourselves to tell stories that, there’s no way you can roll your eyes to it in the middle, and guess how it ends. Mostly because we work with characters, that live on really dark places, and shades of grey, and morally really questionable places. So it’s hard to know who deserves to die, and who deserves to live, when you work with characters like that. So it’s harder for people to predict where it’s going to go. And also we try to intensify the madness, when it comes to the pulp aspects. This franchise now, is really pulpy, in many levels for us. It’s supposed to be that, and it’s supposed to go crazy. It pretends to look realistic, but it really, obviously, It’s a little bit out there, right?

That’s true. You guys possibly should think about, maybe writing a comedy. I mean, there’s definitely humour to be found, even in the darkest moments of DON’T BREATHE 1 and 2.

Now, your approach to storytelling and visual style, it’s refreshing, but it’s discernibly different from other studio films that come out, genre wise. And I was wondering, if that’s something you would attribute to your Uruguayan backgrounds?

Fede Alverez: Great that you say it that way. For us, we try really hard to, not just come here and make movies, but also represent in some level. And that means, not come here and tell the same stories that our American counterparts will tell. So we really tried really hard not to fit in. If that makes any sense. We really try to make sure or culture translates into stories. I think every time we make a movie, and the trailer comes out, there’s some backlash about, “How are they telling this story“? ” Why are they telling this story like this“? People go crazy.

I think the success of a lot of these movies that we made, show that there’s a lot of people that want to see the stories. I think that’s a good thing about diversity in storytelling. I think there’s a lot of chat about diversity in casting, sometimes. But we believe diversity should be also in storytelling, and the kind of stories I want to tell, the way we want to tell them, and ours happened to be quite different. Even if we don’t try to be different, they’ll be naturally, because we just grew up in a different environment, different place, in a third world country. It’s just completely different sensitivity, when it comes to tell stories.

Thank you so much for your time, guys. All the very best with the film.