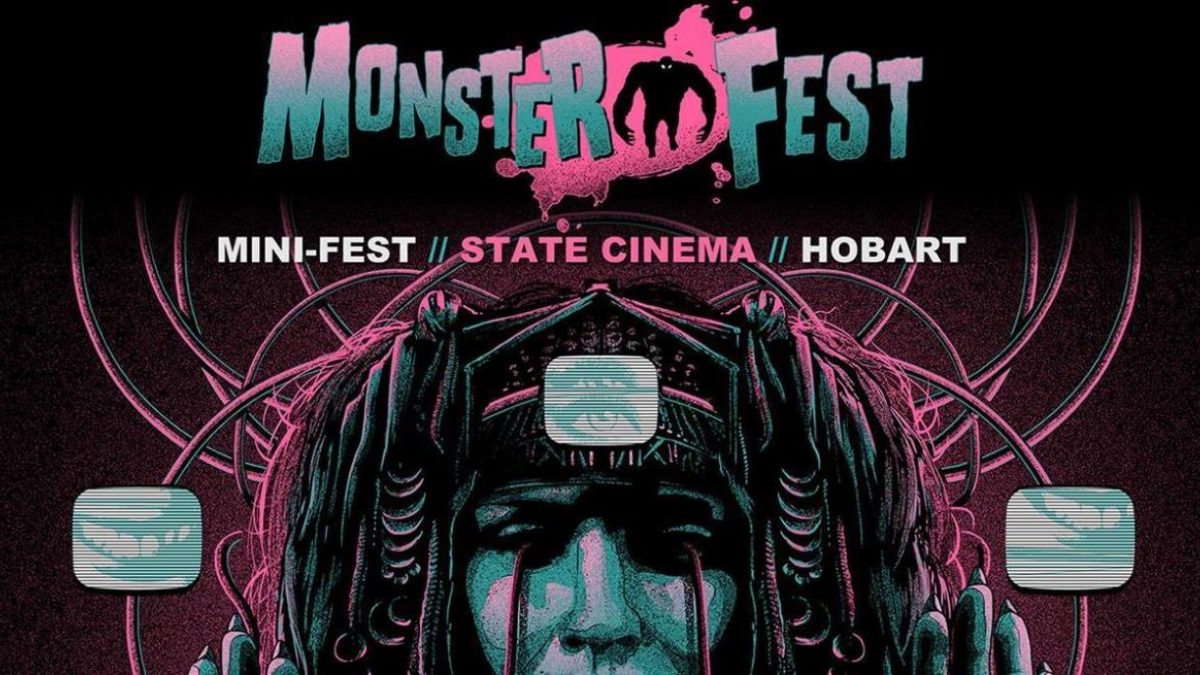 MONSTER FEST arrives at Hobart's STATE CINEMA from December 1st to 4th with a Mini-Fest of cinematic delights! A program boasting five feature films and a short to accompany each one, make no mistake this will be an event not to be missed!

Every year at Sundance one film takes pundits totally by surprise, in 2016 that film was Jim Hosking’s THE GREASY STRANGLER. This is a film like no other, a greasy smorgasbord of filth and depravity that is as repulsive as it is sweet – part comedy, part horror, part love story, all greasy mayhem! The kind of film that festival audiences adore and the kind of film that once seen cannot be erased from the mind! THE GREASY STRANGLER tells the story of Big Ronnie, a man who runs a disco walking tour of LA with his son, Big Brayden. When a sassy young thing named Janet appears one day on their tour, it sets off a fierce rivalry between father and son for her affections – it also brings about the appearance of an oily, slimy, inhuman maniac who stalks the streets at night, strangling the innocent – a beast known as The Greasy Strangler!

Plays w/ Short: RUSHES (dir. Hudson Sowada)
A group of filmmakers need to escape the Lido after being trapped there by an insidious usher.

The Greasy Strangler (Teaser) from Monster Pictures on Vimeo.

Friday December 2nd 9:00pm
I AM NOT A SERIAL KILLER

Since its premiere at SXSW earlier this year, I AM NOT A SERIAL KILLER has been wooing festival audiences around the globe. Based on Dan Wells’ novel of the same name, it tells the story of John Wayne Cleaver, a 16–year–old outsider, obsessed by serial killers, who sets out to discover the truth behind a series of grisly murders in his mid–western backwater town, only to set off a deadly cat and mouse game with one of the most unlikely screen villains in movie history. Fans of WHERE THE WILD THINGS ARE will be blown away by the reemergence of a now teenage Max Records as John Wayne Cleaver, as will BACK TO THE FUTURE fans be to see the great Christopher Lloyd back where he belongs, on the big screen! Masterfully directed by Irish director Billy O’Brien, I AM NOT A SERIAL KILLER is dark and atmospheric, with an understated counter-culture cool that’ll resonate with you ’til your dying breath – absolutely one of the must see films of 2016!

Plays w/ Short: TANGLEWOOD (dir. Jordan Prosser)
As the monstrous creatures in the forest draw closer, a couple who have survived in years of isolation drift apart.

Saturday December 3rd 4:00pm
THE EYES OF MY MOTHER

Nicolas Pesce’s THE EYES OF MY MOTHER created a stir at this year’s Sundance Film Festival – this chilling black and white horror film is shocking beyond belief but at the same time offers some of the most exquisite gothic imagery seen on the big screen in years. THE EYES OF MY MOTHER is made to be experienced in a movie theatre, it’s the kind of powerful stylish cinema that has the ability to cross over and reach arthouse audiences as well as more seasoned genre fans. Eric Kohn from Indie Wire called it “the discovery of this year’s Sundance…a shockingly original tone poem” and Guy Lodge at Variety described it as “an exquisite waking nightmare”- they are right, this is more than just a horror film, it is an unforgettable cinematic experience.

Plays w/ Short: SECRETIONS (dir. Goran Spoljaric)
When a visitor arrives to the basement where a mutant woman is being held captive, the latter sees an opportunity for escape.

The Eyes Of My Mother (Trailer) from Monster Pictures on Vimeo.

Films like HALLOWEEN, A NIGHTMARE ON ELM STREET and CHILD’S PLAY are what many genre hounds cut their horror teeth on and will always hold a special place in their wicked hearts. Well here’s a film that harks back to those magnificent films, a film that’ll have horror purists grinning like demented goons and stuffing their faces with popcorn in wide eyed glee, Dutch director Nick Jongerius’ uber fun slasher, THE WINDMILL MASSACRE. It’s the story of Jennifer, an Aussie backpacker in Holland whose tour bus breaks down leaving her stranded with a bunch of strangers under the shadow of a creepy old windmill, once occupied by an evil freak named ‘The Miller’, where legend would have it ground meal from human bones instead of grain! One by one her hapless tour buddies meet their maker in some of the coolest carnage of the year. Aussie favourite Noah Taylor shines as Nicolas, one of the ill-fated tourists in this freakishly ferocious slasher that’s more fun than a weekend smoking hydro in an Amsterdam café! This is a film best enjoyed in a cinema of like-minded horror fiends, a film that’s been made with great affection for the genre, one that promises to have audiences whooping it up right to the final frame and one that may just be responsible for a slasher resurgence – that’s hope so!

Plays w/ Short: CIGARETTE (dir. Paul Anthony Nelson)
When a woman invites a man into her home after a date, she treats him to an impromptu striptease — but is this a seduction… or an evaluation? And will he fail horribly?

The Windmill Massacre (Trailer) from Monster Pictures on Vimeo.

One of the strangest films to emerge in recent years, it stars evergreen queen of ool, Chloe Sevigny (KIDS, AMERICAN HORROR STORY) and the equally amazing Natasha Lyonne (ORANGE IS THE NEW BLACK). Directed by Danny Perez, a director known mostly as the director of ultra-hip electronic acts such as ‘Animal Collective’. It features some of the trippiest imagery on the big screen for a long time and when thrown into the cinematic pot together makes for one of the most whacked-out body horrors ever seen on the big screen, the kind of movie that’ll have cult movie enthusiasts drooling in anticipation. ANTIBIRTH is another of the midnight crop at this year’s Sundance Film Festival, it tells the story of hard-drinking, pill-popping, bong-ripping Lou (Lyonne) and her best friend Sadie (Sevigny). These ladies spend their days adrift in a drug fuelled haze but one wild night out becomes a bad trip that never ends when Lou wakes up with symptoms of an unexplained highly abnormal pregnancy. Who—or what—is growing inside her? As her due date approaches with alarming swiftness, the fear, paranoia and conspiracy theories begin to pile up. Spiked with blasts of hallucinatory psychedelic colour, surreal shocks and subversive comedy, this audacious feature debut from Danny Perez is a no-holds-barred descent into delirium.

Plays w/ Short: INSOMNOLENCE (dir. Kiefer Findlow)
A haunting and surreal journey into loss, grief and insomnia. Moving, hypnotic and awash with psychedelic color and imagery; this uniquely Australian trip worms its way into your brain and blooms there like an unfurling psychotropic flower.