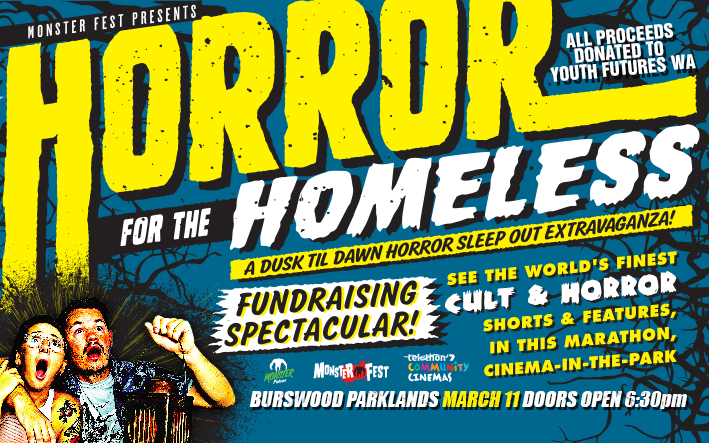 Horror For The Homeless

The horror of youth homelessness comes under the spotlight this March as Monster Fest combine forces with Telethon Community Cinema to present ‘Horror for the Homeless’ - a dusk-til-dawn, outdoor horror and cult movie extravaganza (now with added breakfast thanks to Youth Futures WA)!

The event will take place in Perth’s Burswood Parklands and is designed to raise money for Perth-based homeless agency Youth Futures WA.

The six-film marathon is curated by the Monster Fest team and will showcase an eclectic selection of horror and cult films from the international genre fest circuit alongside ten standout short films from Monster Fest 2016. It’ll be a night of chills and thrills as punters take to the park in solidarity with Perth’s homeless youth.

“We’ve chosen a selection of some of the coolest new horror shorts and feature films on the planet, and teamed them with up with a couple of genre classics that I’m confident will appeal to a broad range of Perth horror buffs,” says Monster’s Neil Foley, “Youth Futures WA are incredible on so many levels, they offer a variety of services to the homeless of Western Australia, from crisis accommodation, to long-term housing, to training and beyond – we could not be any prouder than to be associated with such an amazing organization. It’ll be a fun night, but we also want people to be aware of the irony of staying out in a park all night when some people don’t have the privilege of doing that by choice. I would suggest coming with a friend or two, a well packed picnic basket and a blanket or sleeping bag to bury yourself in when the going gets tough – despite its location, it’s not gonna be a walk in the park!”

The gates to the Telethon Community Cinemas’ Burswood venue open at 6.30pm on Saturday March the 11 and films will screen until just after 6am, at which time Youth Futures WA will be offering breakfast to punters who have braved the entire night.

If you’re a fan of cinema and you’re concerned for the plight of homeless people in WA, bring your fear and your sleep-out gear and get ready for HORROR FOR THE HOMELESS!

A senior fisherman is obsessed with capturing a mermaid and has been doing extensive training to be ready for a possible life in the sea. This puts considerable strain on his marriage, needless to say. One day, everything changes. Fantastical and hard-hitting, this enthralling breakout short was the winner of a Platinum Remi at Worldfest Houston. (Mitch Davis)

In a snowbound church home run by an obsessive priest, a group of young pregnant women try to sleep on a bitter winter’s night. But something is roaming the stone halls, keeping them awake and drawing steadily closer. A truly creepy horror chiller to make your blood run cold. (Catherine Seccombe)

In an overpopulated future, a family travels home from the beach in heavy traffic; between them and the gigantic city in which they live, is a tunnel with a horrifying purpose.

Sidney Prescott (Neve Campbell) has a lot on her plate. Its hard enough to be a teenager coming of age in todays world, let alone have a boyfriend (Skeet Ulrich) with raging hormones, a father whos life is one business trip after another – and still feel healthy when your mother was brutally murdered one year ago. Just when things start to be getting back to normal for Sidney and her friends, the small town of Woodsboro is once again plagued by a killer. Someone who is taking their love of scary movies one step too far. To survive they must follow the golden movie rules – don’t answer the phone, don’t leave the house, but most of all don’t SCREAM.

A haunting and surreal journey into loss, grief and insomnia. Moving, hypnotic and awash with psychedelic colour and imagery; this uniquely Australian trip worms its way into your brain and blooms there like an unfurling psychotropic flower. (Catherine Seccombe)

The English-language debut of Norwegian director André Øvredal (TROLL HUNTER) is a riveting, chilling, and utterly original horror story. In small-town Virginia, police are called to a gruesome crime scene where a family has been massacred in their own house. In the basement, an even more disturbing discovery is made: the partially buried corpse of a nude woman. The cops take this unidentified victim to a small, family-run morgue, where they ask proprietor Tommy Tilden (Brian Cox) and his son Austen (Emile Hirsch) to perform an urgent forensic analysis in order to help determine what happened. As they methodically peel back layers of skin, muscle, and bone, Tommy and Austen are baffled by the lack of external signs of trauma on the victim and the alarming extent of her internal injuries. Increasingly perplexed and frustrated by these forensic anomalies, the pair begins to succumb to late-night jitters, getting spooked at apparitions that seem to be lurking in the shadows. As the dread mounts and the atmosphere gets thick with evil, it becomes apparent that the Tildens’ fate is intertwined with a darkness that neither of them can comprehend. (Colin Geddes, TIFF)

A washed up Kung Fu master takes on super natural forces in Vietnam.

A glamorous, attention-seeking actress will do anything to make sure you never look away. (Hussein Khoder)

When an alien fugitive crash lands into a local puppy farm and begins turning people into mutated robot killing machines with a taste for puppy flesh, Dylan (Whitney Duff), and Eddie (Daisy Masterman), two self-proclaimed political activists, are all that stand between the Earth and total domination. Forced into a ‘dare to be great’ situation that neither are prepared for, the two BFF’s must fight their way past cops, city officials and cybernetic dog butchers in order to destroy the evil Sheborg and save the planet!

As the monstrous creatures in the forest draw closer, a couple who have survived in years of isolation drift apart. (Hussein Khoder)

If you think you’ve seen – or heard – every angle on the zombie subgenre, think again. When a mysterious sound fills the globe turning those who hear it into the flesh-eating undead, a group of deaf people suddenly find themselves in charge of human survival. Smart and profound, with just the right amount of silly. (Alexandra Heller-Nicholas)

Following a divorce, Lucy Emerson (Dianne Wiest) moves with her two sons, Michael (Jason Patric) and Sam (Corey Haim), from Phoenix, Arizona to the small coastal town of Santa Carla, California to live with their Grandpa (Barnard Hughes). Sam and Michael quickly learn that Santa Carla has the reputation of being the murder capital of the world due to the large numbers of vampires. Sure enough, Michael is fingered by a gang of vampires, led by David (Kiefer Sutherland), who turn him into a half-vampire by conning him into drinking some vamp blood. With the help of the Frog brothers, Edgar (Corey Feldman) and Alan (Jamison Newlander), Michael and Sam attempt to kill the head vampire before Michael and his half-vampire girlfriend Star (Jami Gertz) are fully turned themselves.

Claire is a lonely hairstylist with an unnerving desire to escape her disappointing reality. When her final client of the evening arrives with the request to look perfect, Claire has plans of her own.

Pesce and cinematographer Zack Kuperstein chart the stunning descent of a young woman into violence (a breakout performance by Kika Magalhaes) after she witnesses the murder of her mother.

Magnificently horrific, The Eyes of My Mother proves there is immense beauty to be found in ugliness. The mellifluous wails of Portuguese fado singer Amalia Rodrigues are the sensory balm in what is a deliciously gorgeous nightmare that simultaneously seduces and abhors in the space of one shot. (Melbourne International Film Festival)

Q: What should we bring?
A: You can bring a chair, some blankets, pillows, comfy pants, wooly hat, snacks, soft drinks, hot drinks, anything that you think you need to make your comfortable little next for the night.

Q: Will there be alcohol, and if not, can we bring our own?
A: The bar will be open until 10pm, but its not permissible to bring in your own booze.

Q: Will the candy bar be open?
A: Yes the candy bar will be open all night and will have a selection of hot and cold foot, as well as softs drinks, bottled water, tea and coffee.

Q: Are there toilets on site?
A: Yes there are ample toilets.

Q: Can I bring my mummy in case I get too scared?
A: Yes, we encourage everyone to bring their mummy’s in case they get too scared.

Youth Futures WA offers a variety of services and programs designed to empower young people to break the cycle of homelessness and create a brighter future for themselves.

“On any given night up to 10,000 West Australians go to sleep homeless. Of these, a staggering 42% are believed to be under the age of 25. At Youth Futures we believe that every young person has a right to safe, secure accommodation and that an experience of homelessness shouldn’t define them or their future. That’s why we’re excited to be the beneficiary of the Telethon Community Cinema’s fundraiser this March. The funds raised will be supporting our NEST program which provides homeless young mums and their babies with safe accommodation and the support they need to break the cycle of disadvantage.” Says Mark Waite, CEO of Youth Services WA

Now in its 16th season Telethon Community Cinemas began as Movies by Burswood in 2002.
It is a social enterprise run by over 500 volunteers screening films at 4 outdoor cinemas each summer around Perth raising funds for charities seeking to improve the quality of life of children in a health or physical ability crisis. To date over $7 million has been raised.
It aims to make cinema affordable for families and enable them to have a fun night out in a parkland & picnic environment.

Founded in 2011, Monster Fest is an annual genre film festival in Melbourne, Australia mounted by Monster Pictures. The festival is a mix of premieres, international festival favourites, challenging new discoveries and curated repertory sidebars alongside industry-focused events such as panels and masterclasses with renowned international guests, and a special emphasis on supporting emerging Australian genre film talent through the festival and beyond. Under the banner of ‘Monster Fest Presents’, we host screenings and events throughout the year, including theatrical engagements of Monster Pictures titles and in partnership with other distributors in the Australian genre community.