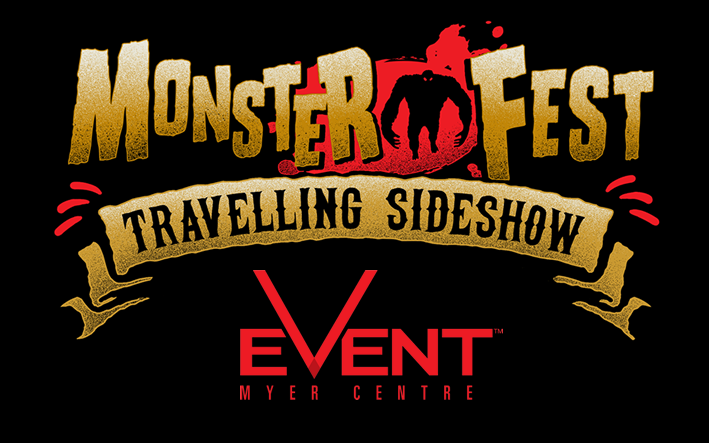 Brisbane genre fans will get a taste of Monster Pictures’ annual Melbourne-based genre film festival Monster Fest this May, thanks to a unique partnership with Event Cinemas to present the MONSTER FEST TRAVELLING SIDESHOW at the Brisbane City Myer Centre location on May 12-14, 2017 with subsequent dates to follow in Adelaide and Perth.

Brisbane based genre fans will get a taste of Monster Pictures’ annual Melbourne-based genre film festival Monster Fest this May thanks to the continued partnership with Event Cinemas to present MONSTER FEST TRAVELLING SIDESHOW at Event Cinemas Myer Centre on May 12-14th, 2017 with subsequent dates in Adelaide and Perth to be announced soon.

MONSTER FEST TRAVELLING SIDESHOW will be a mix of horror-centric highlights from around the globe and will also feature select Australian and Brisbane premieres.

The touring satellite event opens on Friday May 12th with an Aussie double bill, Ben Young’s HOUNDS OF LOVE and Damien Power’s KILLING GROUND. Both films have been enjoying significant critical acclaim after playing at several prestigious festivals around the world and play ahead of their Australian theatrical releases.

The fright-filled weekend will also include a new 4K restoration of Italo-horror maestro Dario Argento’s 1977 masterpiece SUSPIRIA. Other highlights include the creature-feature CAGE DIVE, Aussie Sean Byrne’s THE DEVIL’S CANDY, his follow up to the acclaimed THE LOVED ONES and THE EVIL WITHIN, made by millionaire meth addict, Andrew Getty, heir the Getty oil fortune who reportedly sunk $6 million dollars of his own fortune into the film, only to die before he could finish it. Also out of Sundance is 78-52, a documentary that takes an unprecedented look at the ‘shower scene from PSYCHO’, the screen murder that profoundly changed the course of world cinema. It features interviews with film buffs and filmmakers alike—including Guillermo del Toro, Bret Easton Ellis, Elijah Wood, Eli Roth, and Peter Bogdanovich amongst many others.

Rounding out the program is the Australian Premiere of THE VOID, the latest offering from Steven Kostanski of Astron 6 fame, which he describes as an “unparalleled horror experience filled with terrifying visuals and shocking creature effects fusing the body terror of THE FLY and THE THING with the surreal fear of THE SHINING and THE EXORCIST and will evoke the tone and mood of the works of John Carpenter, and J-Horror films such as THE GRUDGE.”

Perth. The Summer of ’87. 17 y.o. Vicki Maloney is abducted by a married couple who keep her captive in a suburban house. Though broken and tormented, with escape seeming impossible, Vicki closely observes the perverse dynamic between her captors and realises she must drive a wedge between them if she is to survive. Ben Young’s award-winning debut feature follows in the Australian true-crime tradition of SNOWTOWN, CHOPPER & THE BOYS, and opens in US cinemas the very same week as it plays MONSTER FEST TRAVELLING SIDESHOW.

When police officer Carter (Aaron Poole) discovers a blood-soaked man limping down a deserted road, he rushes him to a local hospital with a barebones, night shift staff. As cloaked, cult-like figures surround the building, the patients and staff inside start to turn ravenously insane. Trying to protect the survivors, Carter leads them into the depths of the hospital where they discover a gateway to immense evil.

Dario Argento’s undisputed horror masterpiece is widely considered to be the most shocking and hallucinatory horror movie in history and is described by Argento as “an escalating experimental nightmare”, SUSPIRIA stars Jessica Harper as a young American ballet student who arrives at a prestigious European dance academy and is confronted by a series of bizarre and horrific deaths. Packed with ultra gory effects and dazzling cinematic set pieces, SUSPIRIA is a gruesomely gothic masterpiece of the macabre. A freshly restored Director-approved 4K presentation will screen to celebrate the 40th anniversary of its original release.

Jesse, a struggling artist, and his young wife Astrid and daughter Zooey buy the house of their dreams after the price is driven down by the property’s mysterious dark past. Their lives begin to unravel when Jesse’s paintings take a satanic turn as he begins to channel the voice of the devil, and then Ray, the deranged son of the former owners, becomes obsessed with Zooey after showing up on their doorstep demanding to return home. Soon it becomes clear that Ray and Jesse are both being influenced by the same dark forces and that Jesse’s family isn’t safe from Ray or from the devil himself.