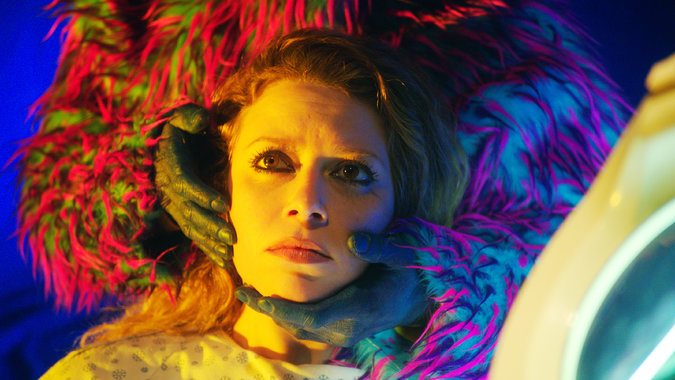 “What if the Dude from The Big Lebowski somehow ended up in David Cronenberg’s The Brood? That’s what my summary would be if I was ripping epic bong hits on my scuzzy couch and describing this epically fucked-up thing I just saw.” (Jordan Hoffman, The Guardian)

Lou (Natasha Lyon, Orange is the New Black) and Sadie (Chloë Sevigny) know how to party. Fuck, they put Andrew WK to shame. Stuck in a downward spiral, Lou awakens with no memory of the night before and showing symptoms of a pregnancy that seems to double in size everyday. Bizarre, given she’s been going through a dry-spell for the last 8 months. Unfazed, she continues to live awash in booze and running off the vapors of pot smoke, until one day she meets Lorna (Meg Tilly), a conspiracy nut who suspects Lou’s pregnancy might just be related to the arrival of an alien species and secret military medical experiments. Building up to a climactic sequence that needs to be seen to be believed, director Danny Perez (who previously helmed music videos for the likes of Animal Collective, Unknown Moral Orchestra and Black Dice) cements himself as a as a bona-fide purveyor of demented visuals and unrelenting madness. Garnering favorable comparisons to Cronenberg, Lynch and Polanski, Anti-Birth is a hallucinatory, body-horror, cult classic for the modern age.