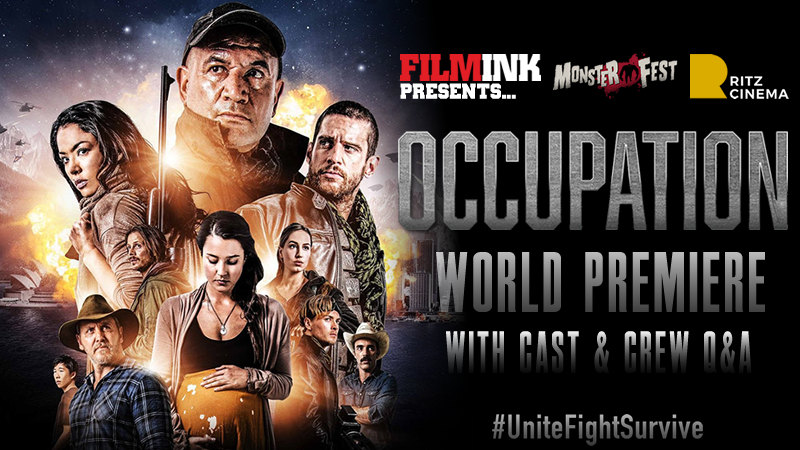 Monster Fest in association with FilmInk Presents the World Premiere of the highly anticipated Australian sci-fi epic OCCUPATION at Sydney’s Ritz Cinema on Tuesday July 10 6:30pm, ahead of its Australian release in cinemas on July 12th 2018 and New Zealand on July 26th 2018.

Following on from our Monster Fest Presents sold-out advance screenings in Brisbane, Gold Coast and Melbourne, it’s Sydney’s turn to get in on the action with tickets also available for the public to purchase here.

A Q&A session will follow the World Premiere screening with all cast members in attendance as well as the filmmakers, writer/director Luke Sparke, and producers Carly Imrie and Carmel Imrie.

Premiere guests will also be able to see props from the film lining the red carpet, including military jeeps, aliens and more.

OCCUPATION follows a group of civilians after their small Australian country town is annihilated by an overwhelming airborne attack as they evade capture and discover they are now among the last remaining survivors of an extra-terrestrial invasion engulfing the entire planet. As humanity falls under world-wide occupation, they form a homegrown army to fight back against vastly superior enemy forces. On the frontlines of the battle for Earth, they are our last hope.

OCCUPATION was shot on the Gold Coast in late 2017, which involved local crew and a supporting cast of more than 300 people.

Don’t miss your chance to catch the World Premiere of OCCUPATION in Sydney at Ritz Cinema on Tuesday July 10th 6:30pm.