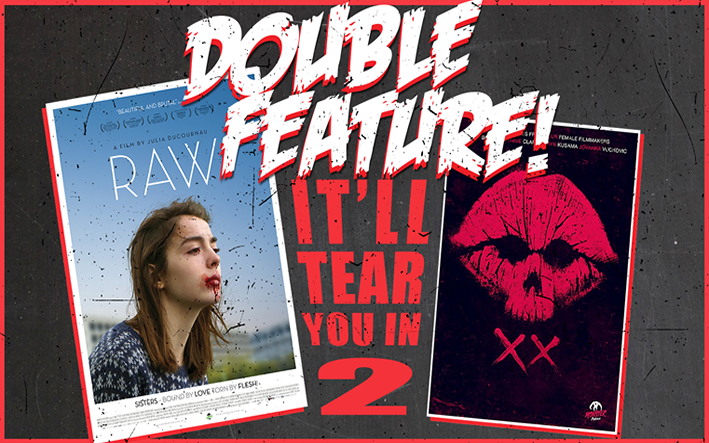 Melbourne's The Astor Theatre plays host to a double feature of RAW & XX.

Melbourne’s The Astor Theatre plays host to a double feature of RAW & XX.

About RAW:
RAW made its World Premiere in Cannes Critics Week where it won the coveted FIPRESCI Prize, and left audiences aghast with some of the most shocking and powerful on-screen imagery since Gaspar Noe’s IRREVERSIBLE. The atmosphere in the cinema that day was one of the most electric the Monster team had ever witnessed – from the start we could sense a nervous anticipation in the room and then from the very first scene, it kicks you in the head with a power that is raw and fierce.

RAW is one of the finest directorial debuts in the genre space in a long time, it tells the story of a teenage girl who joins her sister at a prestigious veterinary college, and is forced to partake in a hazing ritual that sees her defying her vegan upbringing by consuming raw rabbit liver. From here she develops an insatiable desire for flesh – of all types, and what we witness is a coming-of-age like no other, an awakening that is carnal and primal and that takes its central character, and its viewing audience, on a journey that is simultaneously harrowing and beautiful. Filmmaker Julia Ducournau has made a something very special here, a gorgeous cinematic exploration of family and cannibalism, a film that’ll seep its way deep into your psyche and resonate long after the closing credits – make no mistake, this is one of the films of the year.

DON’T FALL, directed by Roxanne Benjamin, tells the story about a group of friends who get into trouble when they venture off the beaten path and trespass on someone – or something-else’s land while on a camping trip

THE BIRTHDAY PARTY, directed by Annie Clark, tells the story of a harried housewife who tries to keep her daughter – and their noisy neighbours – from discovering a dark secret the morning of her daughter’s eighth birthday party.

THE BOX, directed by Jovanka Vucokic and based on a story by Jack Ketchum, tells the story of seven-year-old Danny, who, after glancing in a shiny red gift box while on a commuter train, stops eating. When his father and sister also begin to waste away, Danny’s mother Susan struggles to make the connection between herself, her dying family and the mysterious box before it’s too late.

Directed by Karyn Kusama, HER ONLY LIVING SON follows Cora, who, 18 years prior had narrowly escaped Manhattan, a narcissistic actor husband and a cult with designs on her unborn child. Now Cora finds herself coming face to face with a son who can no longer deny his monstrous heritage.