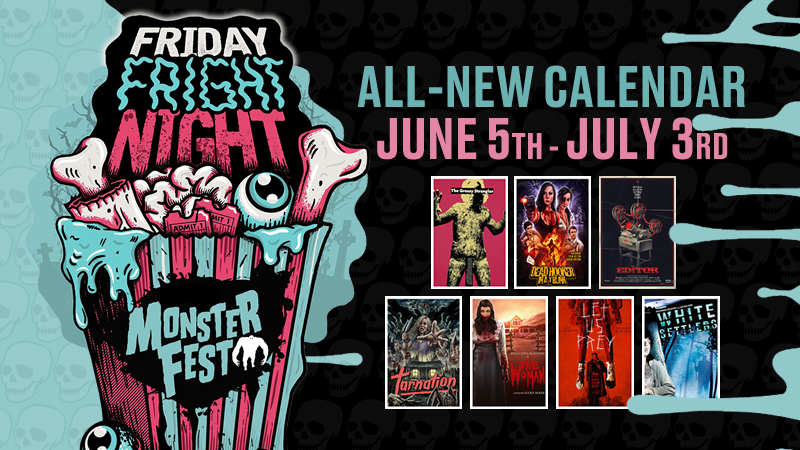 While we all wait with wild eyes and fists a’ready to punish a popcorn in the darkened embrace of our local cinema, Monster Fest returns with a new FRIDAY FRIGHT NIGHT calendar of filmic treats to enjoy from home to make that wait all the more tolerable!

Those who joined us last Friday for our Mystery Movie screening were the first to discover what we’ve got next in-store for all those who dare tune-in to our Facebook page on a Friday night from 9pm (AEST) but for the rest of schleppers, here it is… 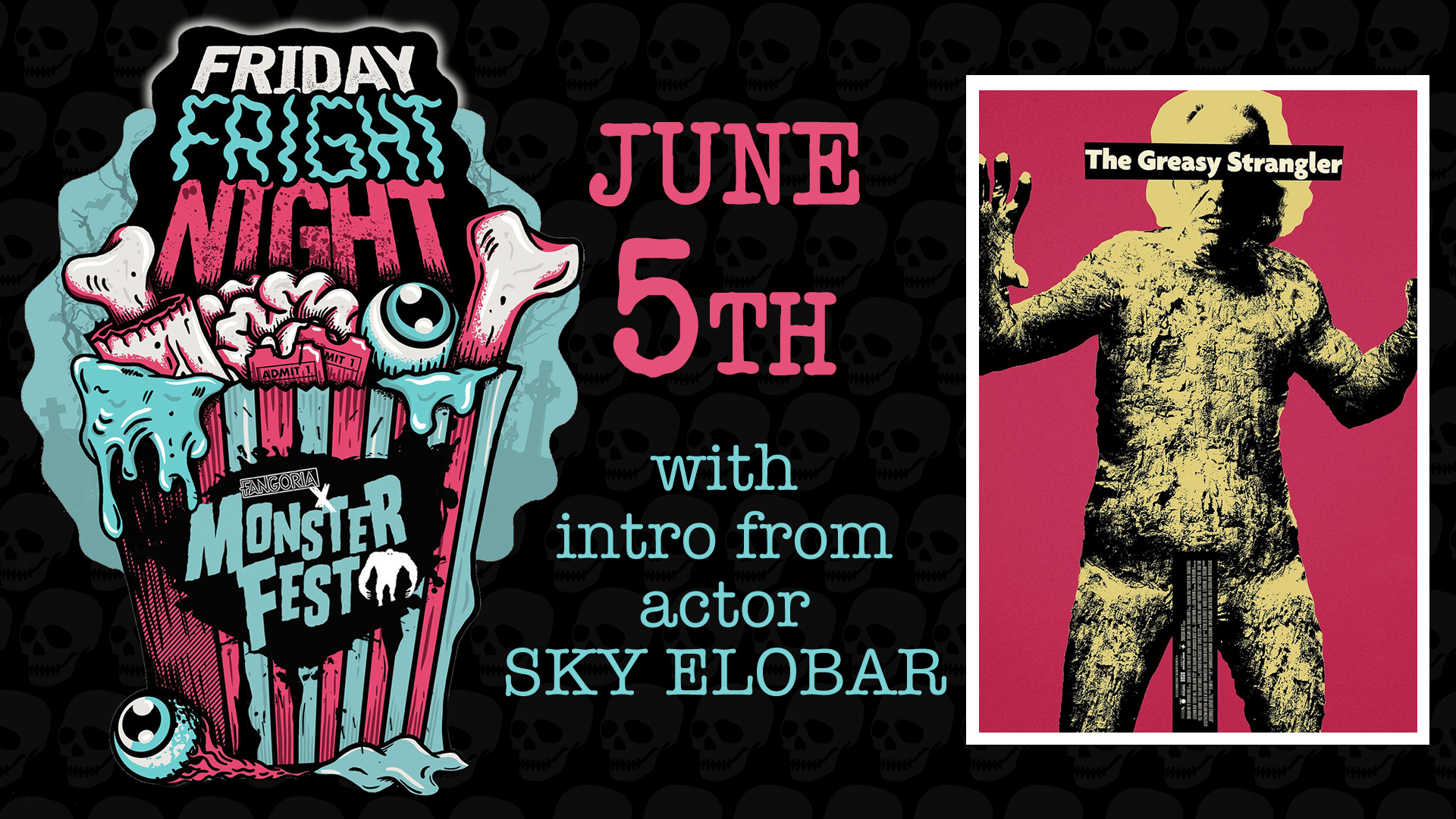 THE GREASY STRANGLER | Friday 5th June 9pm
w/ introduction by actor Sky Elobar
This is the tale of Big Ronnie (Michael St. Michaels), a man who runs a disco walking tour of LA with his son, Big Brayden (Sky Elobar). When a sassy young thing named Janet (Elizabeth De Razzo) appears one day on their tour, it sets off a fierce rivalry between father and son for her affections – it also brings about the appearance of an oily, slimy, inhuman maniac who stalks the streets at night, strangling the innocent – a beast known as THE GREASY STRANGLER! 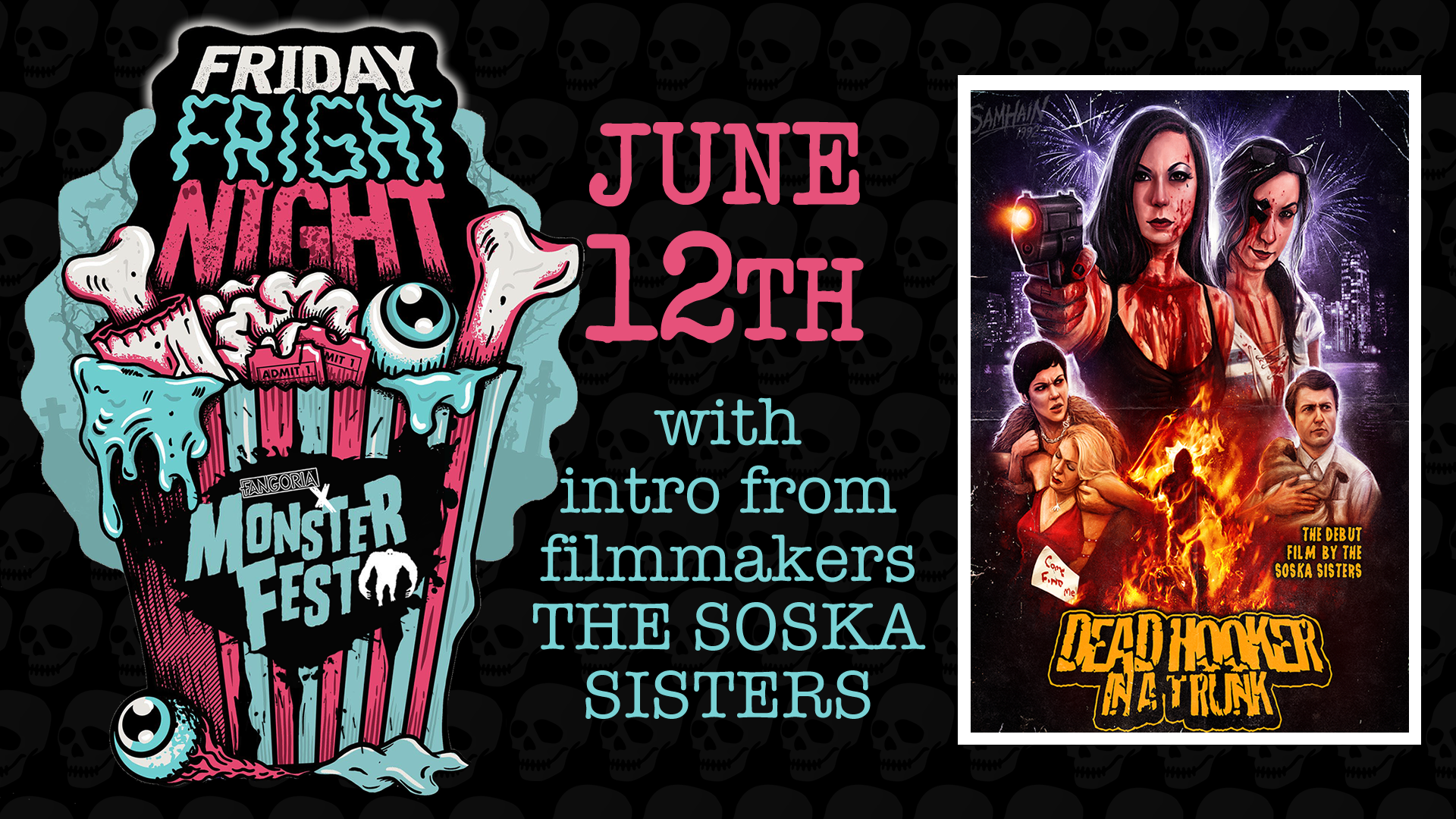 DEAD HOOKER IN A TRUNK | Friday 12th June 9pm
w/ introduction by filmmakers and stars Jen & Sylvia Soska
A group of friends as set out on a simple errand and end up battling persistent police, a sleazy motel manager, chainsaw wielding triads, a brutal serial killer and a mysterious Cowboy Pimp after they discover the body of a dead hooker in the trunk of their car. 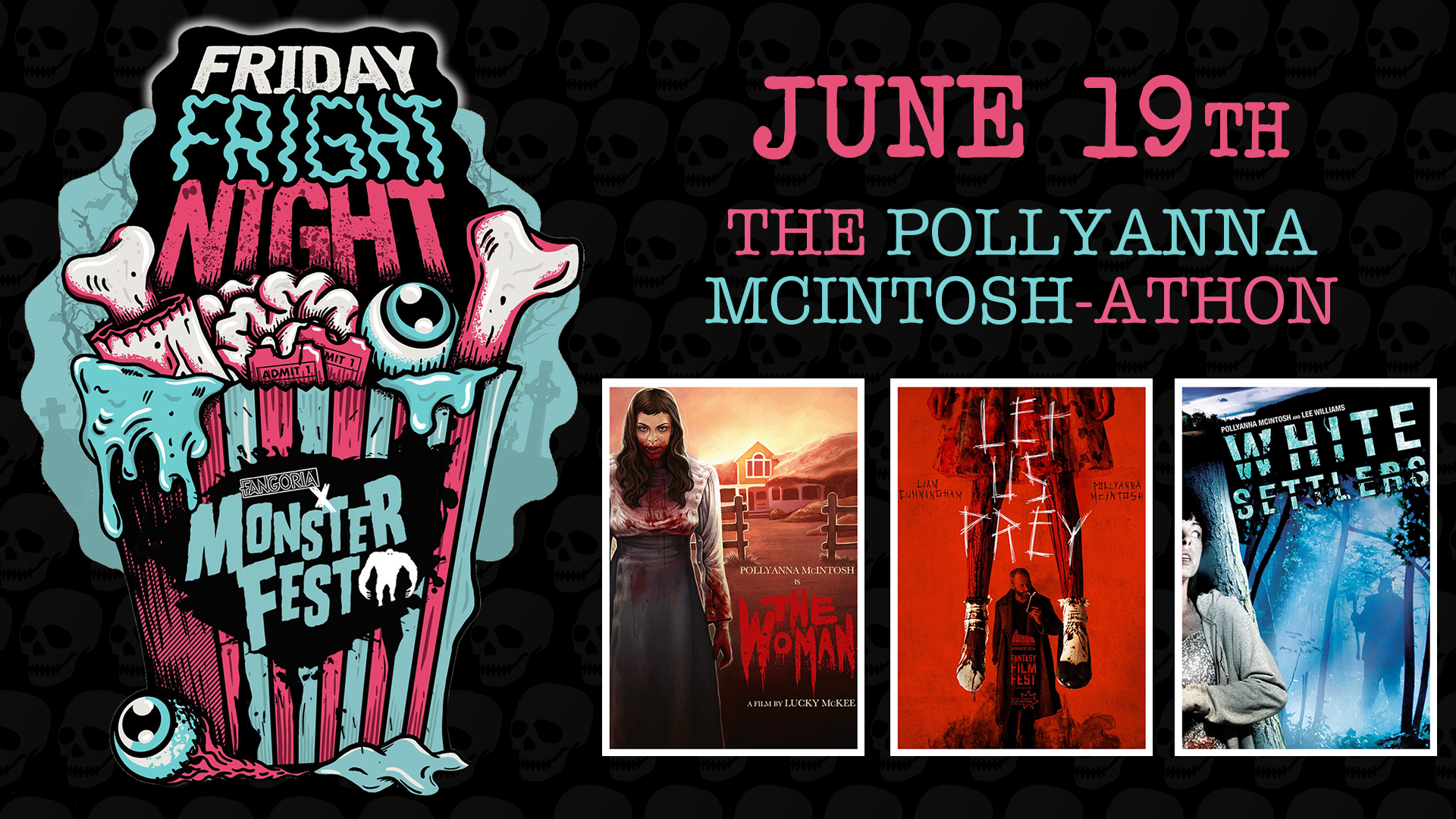 THE POLLYANNA MCINTOSH-ATHON | Friday 19th June 7pm
THE WOMAN: Chris Cleek (Sean Bridgers) is a small town court officer living a quiet, seemingly normal life in the heart of Maine with his beloved family. That is, until he discovers a feral Woman (Pollyanna McIntosh) roaming the woods and makes it the family’s project to civilize her. But as the family’s methods of forcing civility upon the woman become ever more extreme, the perverse bonds uniting them unravel, exposing the darkness within.
LET US PREY: Pollyanna McIntosh stars as Rachel, a police officer on her first day of a new assignment in a rural Scottish village. What begins as a routine enough evening goes horribly wrong with the arrest of a mysterious, bearded stranger (Liam Cunningham). Calm, poised and cool as ice, it becomes clear that there is more to this unusual guest than meets the eye. He knows things. Private things. Evil things. It’s not long before copper turns against copper, villager turns against villager and the police station becomes a blood-soaked battlefield with the very souls of its inhabitants at stake.
WHITE SETTLERS: English couple Sarah (Pollyanna McIntosh) and Ed (Lee Williams) prepare to spend their first night in their new home, an isolated farmhouse on the border of England and Scotland, but as darkness falls they find themselves in a terrifying game of cat and mouse with a gang of mysterious assailants. What do they want and what horrors have they got planned for these newest invaders? 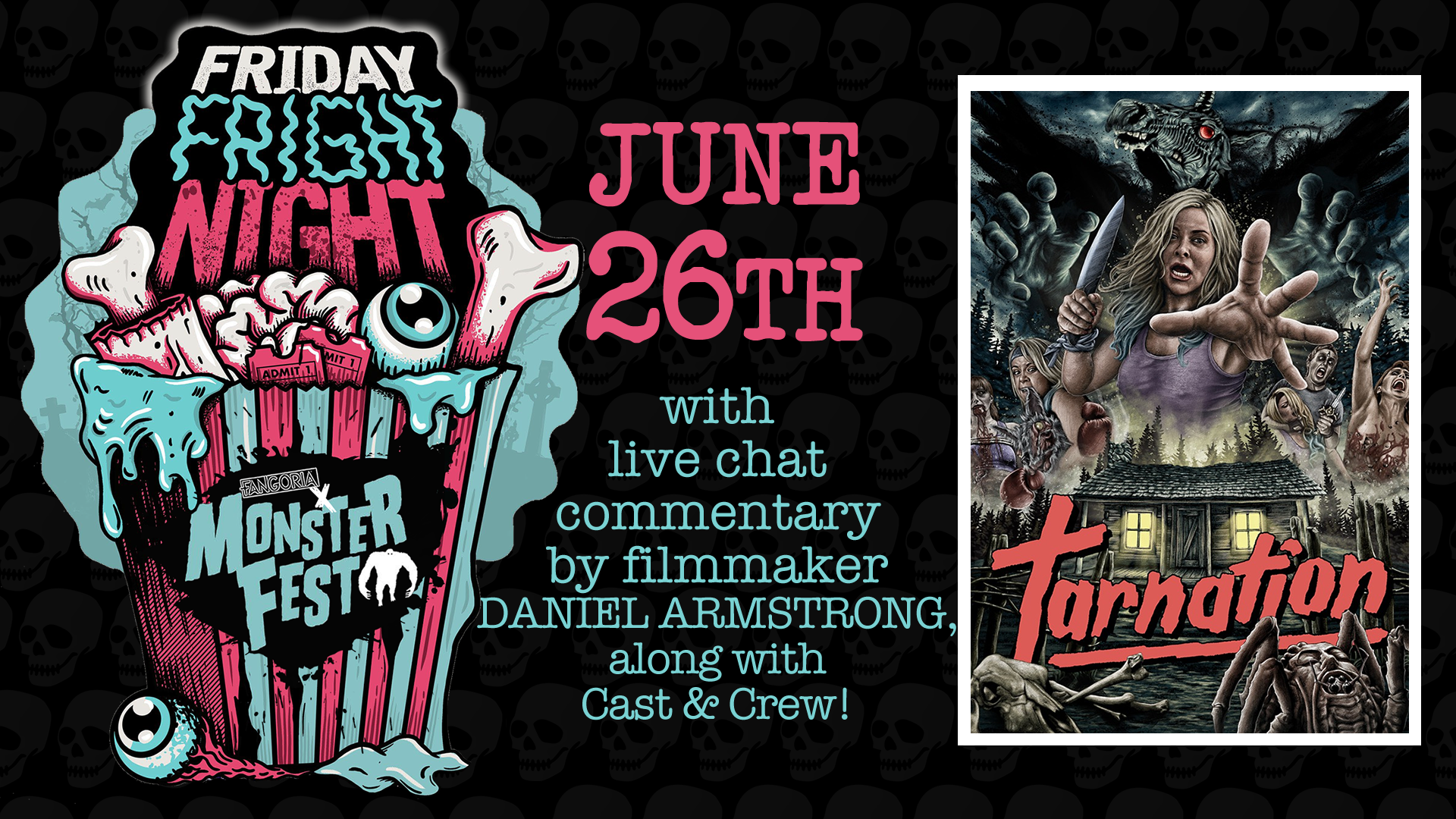 TARNATION | Friday 26th June 9pm
w/ live chat commentary by writer/director Daniel Armstrong, Cast & Crew
During a dirty weekend away, Oscar and her friends are confronted by a crossbow-wielding paraplegic, possessed cultists, penis bugs, a demonic unicorn and a zombie kangaroo. But what else would you expect when your Airbnb is a remote cabin in the woods? 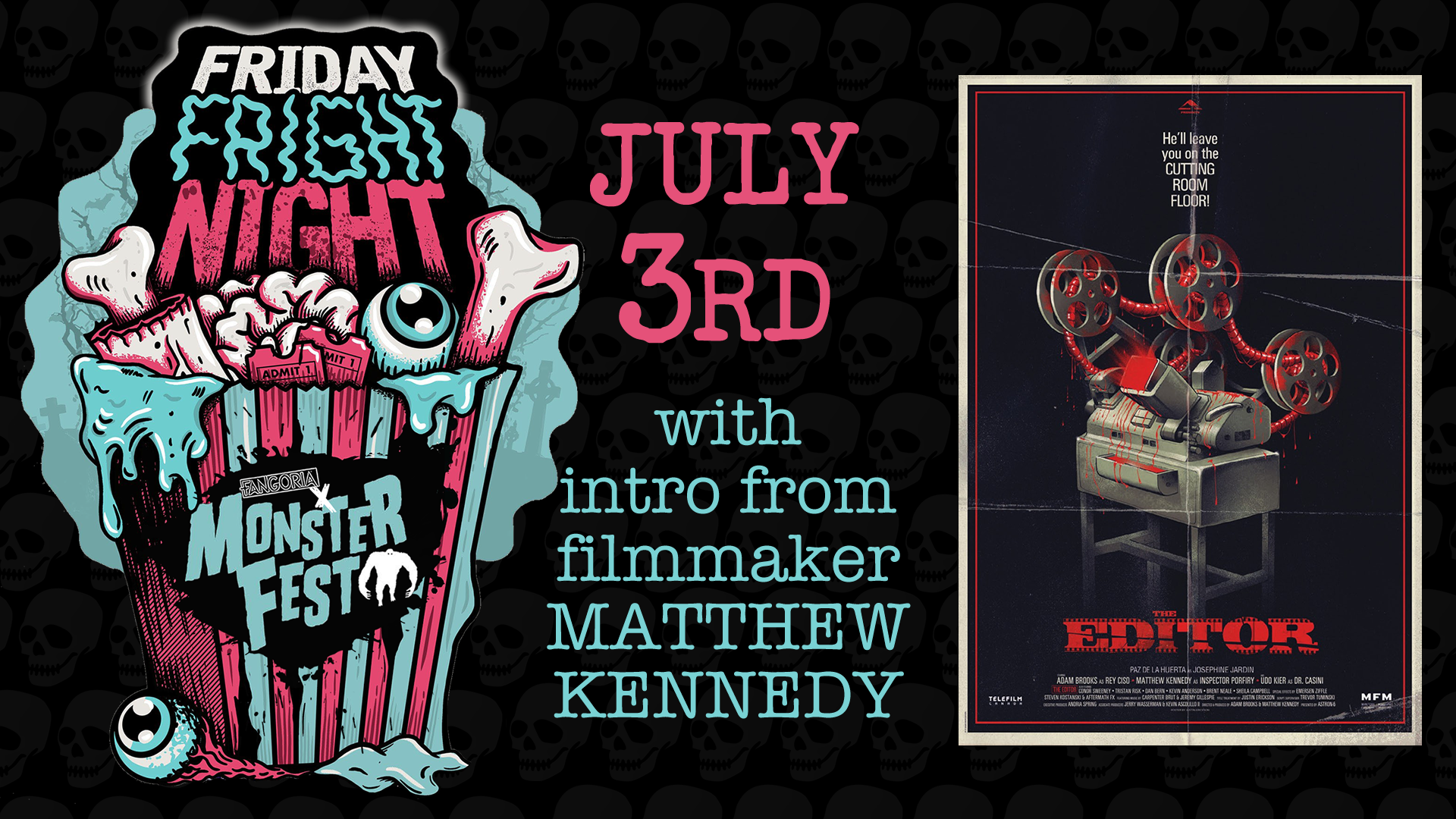 THE EDITOR | Friday 3rd July 9pm
w/ introduction by co-writer/co-director Matthew Kennedy
Rey Ciso (Adam Brooks) was once the greatest editor the world had ever seen. Since a horrific accident left him with four wooden fingers on his right hand, he’s had to resort to cutting pulp films and trash pictures. When the lead actors from the film he’s been editing turn up murdered at the studio, Rey is fingered as the number one suspect. The bodies continue to pile up in this absurdist giallo-thriller as Rey struggles to prove his innocence and learn the sinister truth lurking behind the scenes.