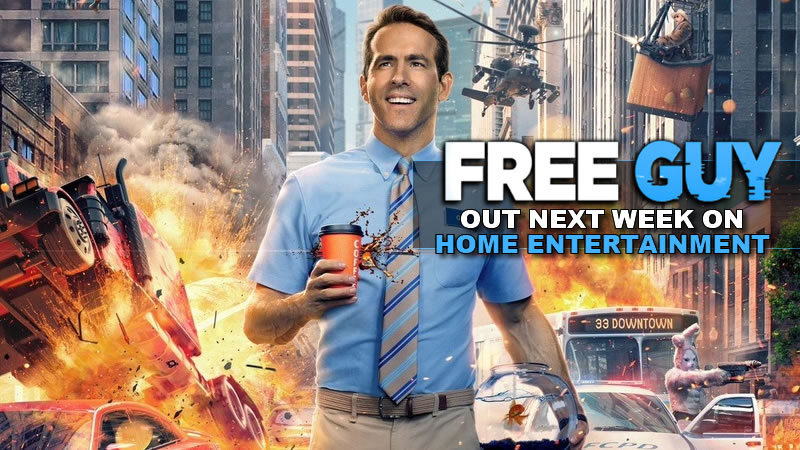 Ryan Reynolds action-comedy FREE GUY opened in cinemas just last month and Disney are already rushing it to home entertainment, next week in fact on September 29.

A bank teller (Ryan Reynolds) who discovers he is actually a background player in an open-world video game decides to become the hero of his own story – one he rewrites himself. Now, in a world where there are no limits, he is determined to be the guy who saves his world his way… before it’s too late.

Special Features
• Deleted and Extended Scenes
-Guy and Buddy Hit the Beach
-Hot Nuts Gets Blown
-NPC Rally (Extended)
• Gag Reel
• Featurettes
-Dude vs Guy – Join Ryan Reynolds, director Shawn Levy and the creative and stunt teams as they reveal the innovative process of creating Free Guy’s ultimate showdown between Guy and the wildly amped-up, spray-tanned, frosted-tipped version of himself known as Dude.
-Creating Molotovgirl – Jodie Comer transforms from a brilliant programmer to her fierce avatar in Free Guy. Watch as the award-winning action star and filmmakers deconstruct the conceptualization, evolution and execution of bringing Molotovgirl to life.
-It’s Taika’s World – Free Guy’s outrageous action may exist in a virtual world, but Taika Waititi makes the real world just as crazy with the over-the-top Antwan. See him at work in this entertaining showcase of a genuinely talented and hilarious performer.
-Welcome to Free City – Delve into the reality-skewing universe that is Free City, as revealed by director Shawn Levy, the cast, and its inventive creative teams. Find out how they transformed a real metropolis into a virtual playground where anything is possible.