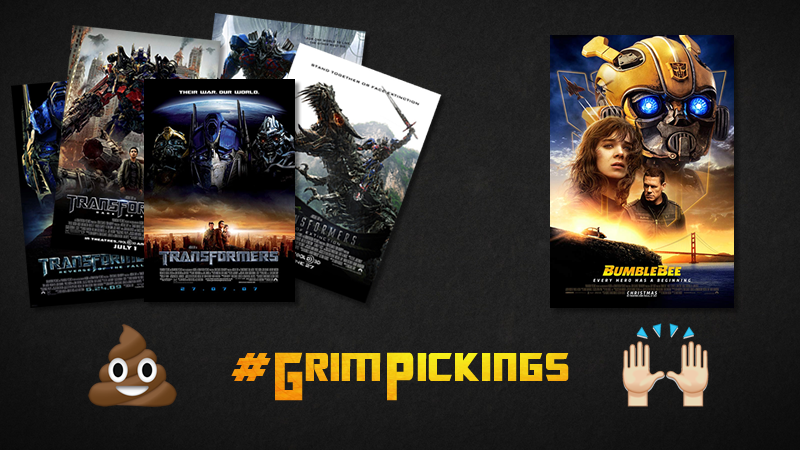 GRIM PICKINGS this week includes key dates to dismember with an established franchise getting a well-deserved overhaul in cinemas while another franchise suffers its dullest chapter yet on home entertainment.

Thursday December 20th
BUMBLEBEE
After the decade’s worth of cinematic discharge that TRANSFORMERS fans have endured, it was only a matter of time before we either gave up trading our hard-earned for constant disappointment or the studio heard the public’s cry and actually delivered something of genuine worth. Thankfully it’s the latter, BUMBLEBEE exceeds any expectation we had for the franchise and is more inline with the 1986 animated film than any of Michael Bay’s output. Regardless of whether BUMBLEBEE acts as a prequel to Bay’s films or is a complete reset on the franchise, it’s a charming, character-driven, action-packed and crowd-pleasing entry to the TRANSFORMERS universe, fit for the whole family. On the run in the year 1987, Bumblebee finds refuge in a junkyard in a small Californian beach town. Charlie (Hailee Steinfeld), on the cusp of turning 18 and trying to find her place in the world, discovers Bumblebee, battle-scarred and broken. When Charlie revives him, she quickly learns this is no ordinary, yellow VW bug.

Wednesday December 19th
THE NUN
If you were left disappointed by filmmaker Corin Hardy’s entry into THE CONJURING universe, you are not alone. Over-stylised, convoluted and completely dependent on sound-designed jump scares, THE NUN was about as a lacklustre affair as popcorn genre fare gets (with maybe the exception of SLENDER MAN). We were flabbergasted that the studio didn’t abandon what they had and start over completely. If you thought the original ANNABELLE was bad, prepare to be floored with what is truly an irreparable stain on any otherwise healthy franchise. When a young nun at a cloistered abbey in Romania takes her own life, a priest (Demián Bichir) with a haunted past and a novitiate (Taissa Farmiga) on the threshold of her final vows are sent by the Vatican to investigate. Together they uncover the order’s unholy secret. Risking not only their lives but their faith and their very souls, they confront a malevolent force in the form of a demonic Nun as the abbey becomes a horrific battleground between the living and the damned.

SEARCHING
After a lacklustre year of mainstream thrillers, along comes A SIMPLE FAVOUR and SEARCHING all in the one week! Similar to UNFRIENDED, SEARCHING uses a computer desktop as its canvas whereby John Cho’s mouse clicks directs us through the narrative. Suspenseful though often predictable, SEARCHING manages to overcome its gimmicky storytelling to deliver an engaging modern thriller. After David Kim (Cho, STAR TREK)’s 16-year-old daughter goes missing, a local investigation is opened and a detective is assigned to the case. But 37 hours later and without a single lead, David decides to search the one place no one has looked yet, where all secrets are kept today: his daughter’s laptop. In a hyper-modern thriller told via the technology devices we use every day to communicate, David must trace his daughter’s digital footprints before she disappears forever.

THE HOUSE WITH A CLOCK IN ITS WALL
Eli Roth, a household name among genre fans, lends his directorial talents to this family-friendly fantasy outing, that’s based on John Bellairs’ beloved 1973 novel of the same name. A little dull, derivative and lacking on the wonderment scale, THE HOUSE WITH A CLOCK IN ITS WALL is not entirely without merit, it’s highly stylized, moves at a fast enough pace and has the odd funny joke that may please audiences who aren’t familiar with the GOOSEBUMPS or HARRY POTTER franchises. The tale of 10-year-old Lewis (Owen Vaccaro), an orphan who is sent to live with his Uncle Jonathan (Jack Black) in a creaky old house. But his new home is far from ordinary and soon reveals a secret world of warlocks and witches. The house is enchanted, and Lewis must join his uncle on a quest to discover the source of a mysterious ticking within its walls.

APT PUPIL
Based on the novella by Stephen King and directed by BOHEMIAN RHAPSODY director and open secret himself, Bryan Singer, APT PUPIL makes its global Blu-ray debut courtesy of Umbrella Entertainment, just in time for its 20th anniversary. Todd Bowden (Brad Renfro) is a brilliant young student who discovers that an old man living in his hometown is actually a wanted Nazi war criminal. To satisfy Todd’s curiosity and earn his silence, Kurt Dussander (Ian McKellen) reveals his secret past… but all too soon it becomes clear that Todd is not the one in control of this twisted psychological game and that if he lives through it, he will learn a very dangerous lesson. Umbrella Entertainment’s Blu-ray release contains a behind-the-scenes featurette, trailer and tv spots.

FELICITY / CENTRESPREAD (Blu-ray Only)
Praise be Umbrella Entertainment for their commitment to not only releasing Ozploitation gems like FELICITY to Blu-ray but including a world-first release of the Ozploitation oddity CENTRESPREAD in high-definition as the companion film in this double feature set! FELICITY: Felicity (the gorgeous Glory Annen) is a sheltered teen who surrenders her blossoming body to a world of bold sexual adventure in this homegrown erotic sin-sation from sexy Ozploitation auteur John D. Lamond. From taboo-breaking pleasures at an all-girl Catholic school to wanton delights in the exotic underground of Hong Kong, come join Felicity as she finally liberates her libido in the Far East with the help of Penthouse pet and Bond girl Joni Flynn(Octopussy). CENTRESPREAD: In a world at the brink of the 21st century, where strict social stratification is rigidly enforced, where spending power is related to social utility rather than to productivity, and the only manifestation of violence is in magazine pages, a photographer whose special talent is mixing violence and sex, is told to find a new girl whose freshness will rejuvenate the pages of the magazine. Gerard (Paul Trahair) not only fulfils his task but also rediscovers innocence and a world left behind by advancing technology when he uncovers Niki (Kylie Foster). But love is not in the Editor’s plans and he offers Niki a choice – stardom or the love of a redundant photographer. Umbrella Entertainment’s Blu-ray release contains a commentary track on FELICITY along with extended interviews from NOT QUITE HOLLYWOOD while CENTRESPREAD features an exclusive interview with producer Greg Lynch and an alternate UK cut.