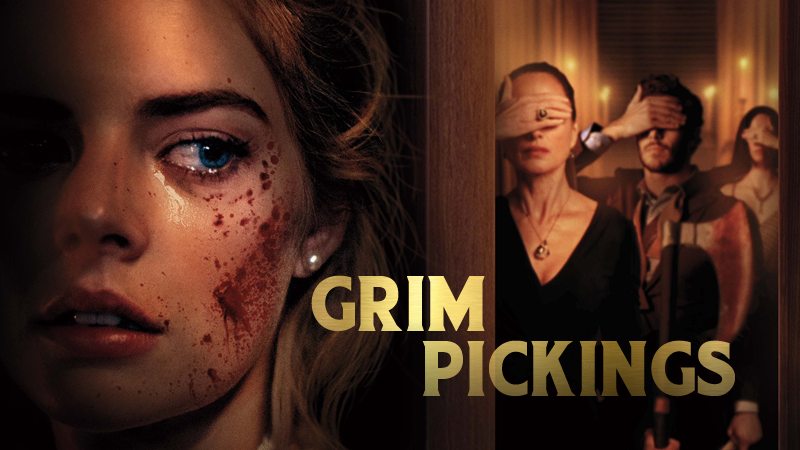 READY OR NOT
After wowing Melbourne audiences last weekend as the Closing Night Film of FANGORIA x MONSTER FEST PART VIII: MONSTER TAKES AUSTRALIA, READY OR NOT sets out to seek genre-hungry audiences this week in cinemas with a major national theatrical release. Weddings are often wrought with family politics but rarely does a wedding night result in an all-out war and that’s exactly what Grace (Samara Weaving) gets when a seemingly innocuous game of hide-and-go-seek turns into kill or be killed with her new in-laws. Directing duo Matt Bettinelli-Olpin & Tyler Gillett follow-up their modestly successful 2014 pregnancy horror DEVIL’S DUE with this witty, suspenseful and surprisingly quite bloody comedy-horror that further elevates Weaving as a contemporary horror heroine following her turns in THE BABYSITTER (2017) and MAYHEM (2017).

READY OR NOT follows a young bride (Weaving) as she joins her new husband’s (Mark O’Brien) rich, eccentric family (Adam Brody, Henry Czerny, Andie MacDowell) in a time-honoured tradition that turns into a lethal game with everyone fighting for their survival.

BLINDED BY THE LIGHT
BEND IT LIKE BECKHAM filmmaker Gurinder Chadha returns with a hilarious and heartfelt coming-of-age tale of English lad Javed (Viveik Kalra) of Pakistani heritage who navigates his adolescence and forges an identity with the influence of the soulful sounds of New Jersey’s finest export, Bruce ‘The Boss’ Springsteen. BLINDED BY THE LIGHT is more than a simple story of teen angst, struggle and acceptance, its an inspirational work of enthusiastic endurance that will have you tapping your foot along to The Boss’ anthems as you identify with Javed’s rocky plight of growing up!

Javed (Kalra), is a British teen of Pakistani descent growing up in the town of Luton, England, in 1987. Amidst the racial and economic turmoil of the times, he writes poetry as a means to escape the intolerance of his hometown and the inflexibility of his traditional father. But when a classmate introduces him to the music of Bruce Springsteen, Javed sees parallels to his working-class life in the powerful lyrics. As Javed discovers a cathartic outlet for his own pent-up dreams, he also begins to find the courage to express himself in his own unique voice.

CRAWL
Genre stalwart Alexandre Aja (PIRANHA 3D, HIGH TENSION) helms this fast-paced, anxiety-inducing and throughly enjoyable creature-feature meets disaster flick with expert precision. There’s no dilly-dallying about in CRAWL, the breakneck action begins immediately after the opening titles and doesn’t let up for the entire ninety minutes, in a word ‘breathless’. Fans of Aja’s prior films, will know of his masterful use of carnage and gore and CRAWL is no exception, with some of the most creative kills the big screen has bared witness to in recent years. That’s not to say that CRAWL is pure show, it is in fact one of the more suspenseful genre outings in some time too but comes with the added bonus of genuine payoffs! 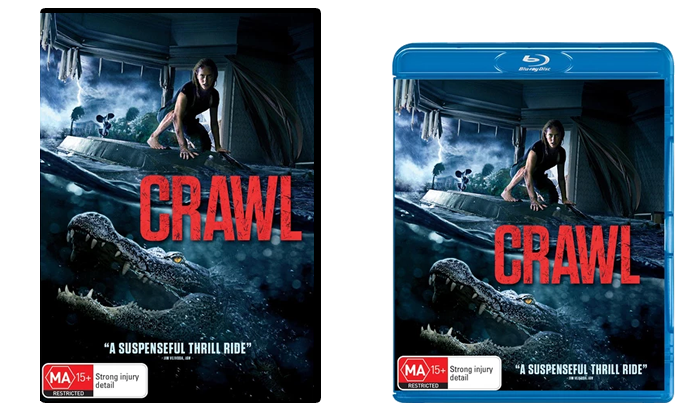 When a massive hurricane hits her Florida hometown, Haley (Kaya Scodelario) ignores evacuation orders to search for her missing father (Barry Pepper). Finding him gravely injured in the crawl space of their family home, the two become trapped by quickly encroaching floodwaters. As time runs out to escape the strengthening storm, Haley and her father discover that the rising water level is the least of their fears.

Paramount Pictures’ Blu-ray has a demo-worthy DTS-HD Master Audio 7.1 track that does more than merely engage the surround channels, it engulfs your entire living room into the action without missing a lick of a dialogue. Special Features range from an Alternate Opening, Deleted & Extended Scenes to two production featurettes ‘Beneath CRAWL’ running at almost half an hour and ‘Category 5 Gators: The VFX of CRAWL at just over eleven minutes, the SF is wrapped up with a highlight reel/montage of action from the film titled ‘Alligator Attacks’.

SPIDER-MAN: FAR FROM HOME
Being the first film to follow on from AVENGERS: END GAME is no mean feat but returning director Jon Watts (CLOWN, COP CAR) rises to the occasion with a light-hearted, exciting and relentlessly breathless entry in the MCU. From its healthy balance of humour and high concept spectacle, SPIDER-MAN: FAR FROM HOME delivers a narrative that is as rich in its character development as it is in its action-packed set pieces with refreshingly and surprisingly realistic stakes!

Our friendly neighbourhood Super Hero (Tom Holland) decides to join his best friends Ned (Jacob Batalon), MJ (Zendaya), and the rest of the gang on a European vacation. However, Peter’s plan to leave super heroics behind for a few weeks are quickly scrapped when he begrudgingly agrees to help Nick Fury (Samuel L. Jackson) uncover the mystery of several elemental creature attacks, creating havoc across the continent!

Sony Pictures 4K Ultra-HD & Blu-ray releases are laden with Special Features containing over ten Featurettes, Deleted & Alternate Scenes, Gag Reel and even a Short Film! Ultra-HD enthusiasts will be pleased to hear that the 4K release contains a Dolby Atmos track which while being an improvement over the Blu-ray’s DTS-HD Master Audio 7.1, it does lacks the depth one would hope from a film like this one, suffering a limited range and ultimately a little too flat for the visual set-pieces.

STUBER
Kumail Nanjiani (SILICON VALLEY) and Dave Bautista (GUARDIANS OF THE GALAXY) make for a perfect pairing in this buddy comedy that delivers just as many big laughs as it does high-octane action. Foul-mouthed, fast-paced and surprisingly violent, STUBER is quite possibly the best action-comedy in years! 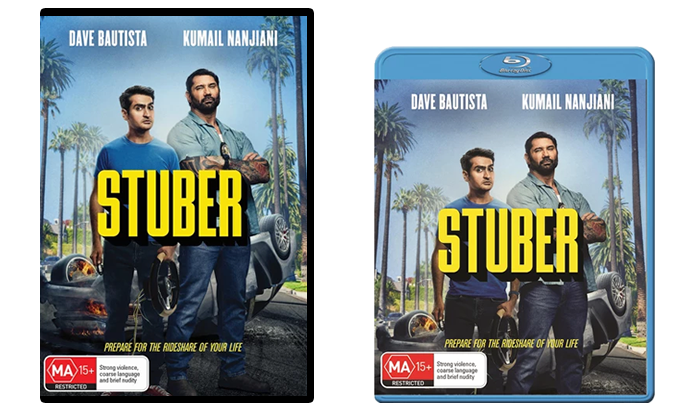 When a mild-mannered Uber driver named Stu (Nanjiani) picks up a passenger (Bautista) who turns out to be a cop hot on the trail of a brutal killer, he’s thrust into a harrowing ordeal where he desperately tries to hold onto his wits, his life and his five-star rating.

VICTOR CROWLEY
Filmmaker Adam Green returns with the fourth instalment in his old-school slasher franchise, HATCHET, and it is without a doubt the best entry in the series since the first from 2006. As funny as it is gory, VICTOR CROWLEY, walks the tightrope of horror and humour with ease and its tongue firmly in-cheek. 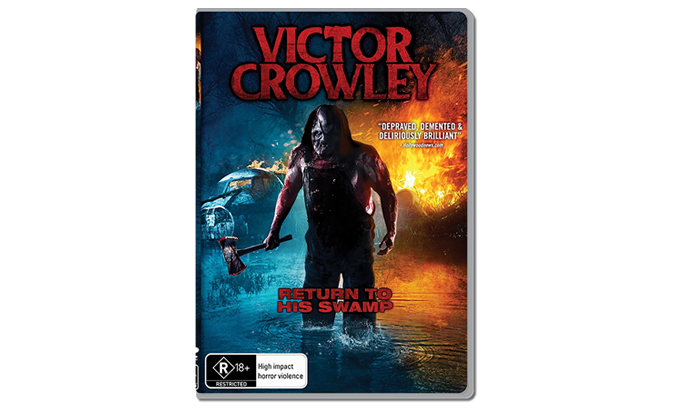 In 2007, over forty people were brutally torn to pieces in Louisianas Honey Island Swamp. Over the past decade, lone survivor Andrews (Parry Shen) claims that local legend Victor Crowley (Kane Hodder, Friday the 13th series) was responsible for the horrific massacre have been met with great controversy. But when a twist of fate puts him back at the scene of the tragedy, Crowley is mistakenly resurrected and Andrew must face the bloodthirsty ghost from his past. An all-new, horrifying journey into the haunted, blood-drenched bayou.