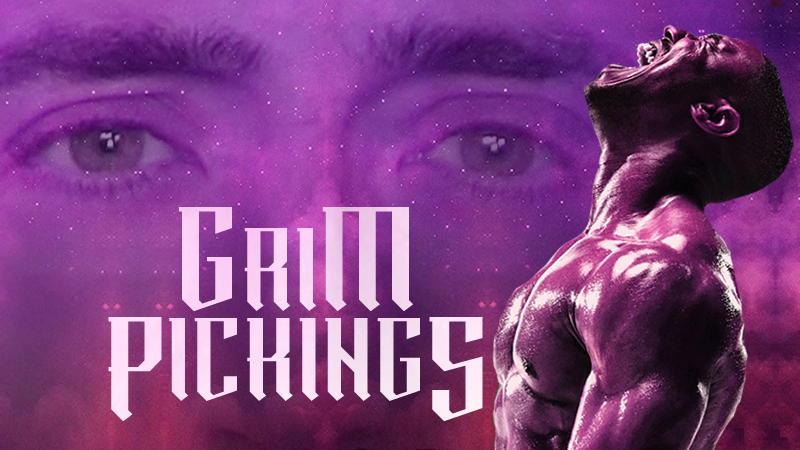 GRIM PICKINGS this week includes key dates to dismember with a heavyweight sequel contending for your box office dollar in cinemas while the crazy evil is unleashed on home entertainment!

Thursday November 29th
CREED II
Michael B.  Jordan reprises his role as Adonis Creed in this follow-up to the critically praised ROCKY spin-off from 2015, helmed by sophomore filmmaker Steven Caple Jr. (THE LAND), this latest instalment will witness Creed squaring off with Viktor Drago, son of Ivan Drago from ROCKY IV. Life has become a balancing act for Adonis Creed. Between personal obligations and training for his next big fight, he is up against the challenge of his life. Facing an opponent with ties to his family’s past only intensifies his impending battle in the ring. Rocky Balboa is there by his side through it all and, together, Rocky and Adonis will confront their shared legacy, question what’s worth fighting for, and discover that nothing’s more important than family. Creed II is about going back to basics to rediscover what made you a champion in the first place, and remembering that, no matter where you go, you can’t escape your history.

ANNA AND THE APOCALYPSE
Hot on the heels of its British Film Festival run across Australia in October, the world’s first festive zom-com musical will open in select cinemas. ANNA AND THE APOCALYPSE has the honour of being one of the most divisive films in Cult of Monster’s history with Ben & Jarret at odds after having caught it at last year’s Fantastic Fest. PS: It’s great! – Jarret. A zombie apocalypse threatens the sleepy town of Little Haven – at Christmas – forcing Anna and her friends to fight, slash and sing their way to survival, facing the undead in a desperate race to reach their loved ones. But they soon discover that no one is safe in this new world, and with civilization falling apart around them, the only people they can truly rely on are each other.

THE GRINCH
Another festive flick opens in cinemas this week in the form of the latest adaptation of the timeless Dr. Seuss tale, THE GRINCH WHO STOLE CHRISTMAS. Can you believe that’s been eighteen years since the live action adaptation with Jim Carrey first graced cinema screens? Feeling old? So do we! This latest retelling comes courtesy of Illumination, the animation studio responsible for the DESPICABLE ME franchise and recent hit THE SECRET LIFE OF PETS and in our opinion its the best version yet…no bah humbug! Each year at Christmas they disrupt his tranquil solitude with their increasingly bigger, brighter and louder celebrations. When the Whos declare they are going to make Christmas three times bigger this year, the Grinch realizes there is only one way for him to gain some peace and quiet: he must steal Christmas. To do so, he decides he will pose as Santa Claus on Christmas Eve, even going so far as to trap a lackadaisical misfit reindeer to pull his sleigh. Meanwhile, down in Who-ville, Cindy-Lou Who-a young girl overflowing with holiday cheer-plots with her gang of friends to trap Santa Claus as he makes his Christmas Eve rounds so that she can thank him for help for her overworked single mother. As Christmas approaches, however, her good-natured scheming threatens to collide with the Grinch’s more nefarious one. Will Cindy-Lou achieve her goal of finally meeting Santa Claus? Will the Grinch succeed in silencing the Whos’ holiday cheer once and for all?

Wednesday November 28th
MANDY
MANDY is undoubtably one of the best films of 2018, from from its striking cinematography to its engulfing sound design to its gripping narrative, its an epic assault on the senses and NOT TO BE MISSED! Somewhere in the primal wilderness near the Shadow Mountains in the year 1983, Red Miller (Nicolas Cage) has fallen deeply for the deceptively charming Mandy Bloom (Andrea Riseborough). However, the life he has made for himself comes crashing down suddenly and horrifyingly, when a vile band of ravaging cultists and supernatural creatures desecrate his idyllic home with vicious fury. A broken man, Red now lives for one thing only—to hunt down these maniacal villains and exact swift vengeance. Madman’s Blu-ray & DVD releases will contain a 22 minute behind-the-scenes featurette with cast & crew interviews along with five extended/deleted scenes that includes the full-length Cheddar Goblin commercial!

THE MEG
Despite THE MEG’s lukewarm reviews, Cult of Monster collectively dug Jason Statham and his aquatic cohorts go toe-to-fin in the high concept creature feature! Sure it was light on the suspense and the gore was near-nonexistent but the sheer scale, spectacle and humour of it all had us throughly entertained for its surprisingly well-paced 113 minutes! A deep-sea submersible—part of an international undersea observation program—has been attacked by a massive creature, previously thought to be extinct, and now lies disabled at the bottom of the deepest trench in the Pacific…with its crew trapped inside. With time running out, expert deep sea rescue diver Jonas Taylor (Statham) is recruited by a visionary Chinese oceanographer, against the wishes of his daughter Suyin (Bingbing Li), to save the crew—and the ocean itself—from this unstoppable threat: a pre-historic 75-foot-long shark known as the Megalodon. What no one could have imagined is that, years before, Taylor had encountered this same terrifying creature. Now, teamed with Suyin, he must confront his fears and risk his own life to save everyone trapped below…bringing him face to face once more with the greatest and largest predator of all time. Roadshow’s 4K Ultra-HD & Blu-ray releases contain two production featurettes: ‘Chomp On This: The Making Of The Meg’ and ‘Creating The Beast’ and 4K enthusiasts will be pleased to hear that the 4K Ultra-HD contains both Dolby Vision and Dolby Atmos!