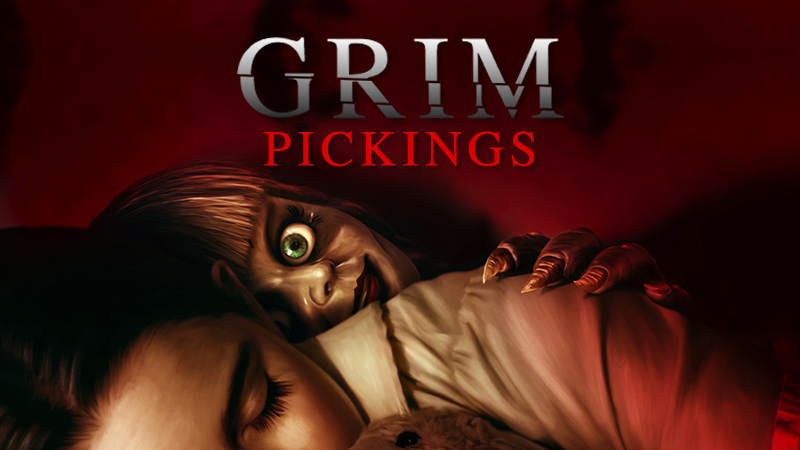 GRIM PICKINGS this week includes key dates to dismember with the best side story in THE CONJURING universe yet opening in cinemas while home entertainment gets a little less ‘awesome’ with another LEGO movie!

ANNABELLE COMES HOME
Screenwriter Gary Dauberman (IT, ANNABELLE) steps into the director’s chair for his debut feature film, the third in the ANNABELLE franchise and seventh in THE CONJURING universe. ANNABELLE COMES HOME takes place in 1971, after both ANNABELLE CREATION (1955) & ANNABELLE (1967) and immediately follows on from THE CONJURING (1971), which means it occurs prior to THE CONJURING 2 (1977). Confusing? Well only if you’re attempting to determine the timeline of events between long breaks of watching films within THE CONJURING universe. A genuine strength of ANNABELLE COMES HOME is that you need not have seen any films within the universe to enjoy it as its own standalone feature, however if you have seen others it certainly offers up plenty of intertextual references to reward fans. ANNABELLE COMES HOME plays less as a sequel to its previous haunted dolly films and more as amalgamation of NIGHT AT THE MUSEUM, 13 GHOSTS and FRIDAY THE 13TH: THE SERIES, whereby the haunted artefacts of demonologists Ed & Lorraine Warren’s home come to life and wreak terror upon three teens and a child. Whilst each cursed object is given due screen-time as the protagonists sort to defeat them, some would have benefitted from a little more backstory but that’s what spin-offs are for (right?). Tonally this instalment is more akin to THE CONJURING 1 & 2, trading on atmosphere and suspense, whereby scares for the most part aren’t served by clockwork but rather earned in investment. Finely tuned performances, rich production design and a distinct visual aesthetic also lend ANNABELLE COMES HOME a level of authenticity that lacked in prior ANNABELLE films, elevating it from a mere sequel to standout feature in a filmic universe that still holds promise. Determined to keep Annabelle from wreaking more havoc, demonologists Ed and Lorraine Warren bring the possessed doll to the locked artefacts room in their home, placing her “safely” behind sacred glass and enlisting a priest’s holy blessing. But an unholy night of horror awaits as Annabelle awakens the evil spirits in the room, who all set their sights on a new target—the Warrens’ ten-year-old daughter, Judy, and her friends.

YESTERDAY
Director Danny Boyle (TRAINSPOTTING, 28 DAYS LATER) helms this offbeat modern fairy tale penned by Richard Curtis (LOVE ACTUALLY, FOUR WEDDINGS AND A FUNERAL) with mixed results. YESTERDAY offers up an interesting premise, being that a global power outage creates an alternate timeline where seemingly only one man, being a failed musician, can recall the music of THE BEATLES. Even if loosely influenced by a plotline from HOT TUB TIME MACHINE 2, the concept is strong however its only enough to get it half the way there, unfortunately YESTERDAY loses momentum midway through, deviating course and becoming entangled in unnecessary plotting. At its heart, YESTERDAY wishes to be a love story though it feels as if this aspect of the film isn’t given due attention throughout and instead only becomes a heavy focal point in the film’s final act. Where YESTERDAY does succeed is with its overall charm, humour and creative renditions of THE BEATLES songs, it’s just a shame that the story itself didn’t stick to a more linear path as if it had it may well have been one of the year’s best films. Jack Malik (Himesh Patel, EASTENDERS) is a struggling singer-songwriter in a tiny English seaside town whose dreams of fame are rapidly fading, despite the fierce devotion and support of his childhood best friend, Ellie (Lily James, PRIDE AND PREJUDICE AND ZOMBIES). Then, after a freak bus accident during a mysterious global blackout, Jack wakes up to discover that The Beatles have never existed … and he finds himself with a very complicated problem, indeed. Performing songs by the greatest band in history to a world that has never heard them, and with a little help from his steel-hearted American agent, Debra (Kate McKinnon, GHOSTBUSTERS), Jack’s fame explodes. But as his star rises, he risks losing Ellie — the one person who always believed in him. With the door between his old life and his new closing, Jack will need to get back to where he once belonged and prove that all you need is love.

THE LEGO MOVIE 2
It feels like we’ve had a slight over-saturation Lego films (THE LEGO BATMAN MOVIE, THE LEGO NINJAGO MOVIE) between the release of the first film and this sequel, subsequently the wait between films hasn’t felt that long nor anticipated. As for the film itself, despite its hefty ambition, it feels bloated, repetitive, confused, ill-paced and ultimately far less ‘awesome’ than its predecessor. It’s been five years since everything was awesome and the citizens are facing a huge new threat: LEGO DUPLO invaders from outer space, wrecking everything faster than they can rebuild. The battle to defeat them and restore harmony to the LEGO universe will take Emmet, Lucy, Batman and their friends to faraway, unexplored worlds, including a strange galaxy where everything is a musical. It will test their courage, creativity and Master Building skills, and reveal just how special they really are. Roadshow’s 4k Ultra-HD/Blu-ray & Blu-ray releases include an Audio Commentary track with the filmmakers, four production Featurettes, Deleted Scenes, Music Video and an ‘Everything is Awesome’ sing-along video!

Grim Pickings is written and compiled weekly by Jarret Gahan.