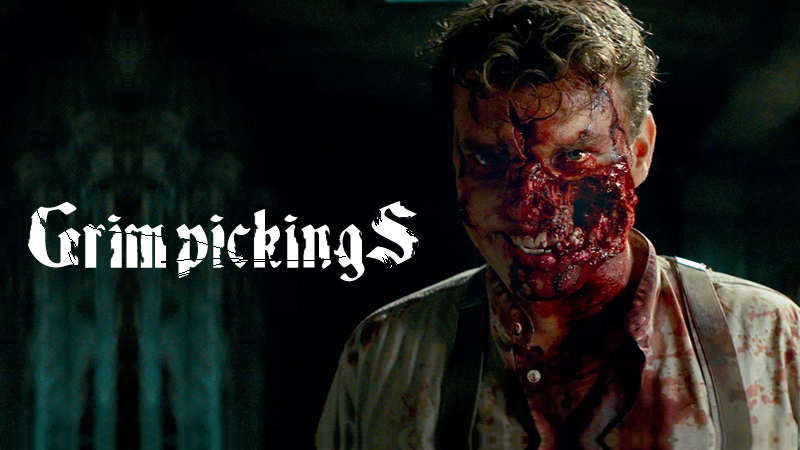 GRIM PICKINGS this week includes key dates to dismember with the goriest genre film to come from a major studio hitting cinemas while home entertainment delivers a hands down definitive Blu-ray release of an Ozploitation classic!

Thursday December 6th
OVERLORD
The sophomore feature from Australian filmmaker Julius Avery (SON OF A GUN) and producers J.J. Abrams (CLOVERFIELD) & Lindsey Webber (STAR TREK) defies description, its a bold genre-hybrid of the highest order and will no doubt find its way into your favourite films of 2018! With only hours until D-Day, a team of American paratroopers drop into Nazi-occupied France to carry out a mission that’s crucial to the invasion’s success. Tasked with destroying a radio transmitter atop a fortified church, the desperate soldiers join forces with a young French villager to penetrate the walls and take down the tower. But, in a mysterious Nazi lab beneath the church, the outnumbered G.I.s come face-to-face with enemies unlike any the world has ever seen.

MORTAL ENGINES
Anticipation could not be greater for this epic fantasy adventure helmed by Oscar-winning visual effects artist turned director Christian Rivers and produced by Australasian treasure Peter Jackson (THE LORD OF THE RINGS, BRAIN DEAD). Hundreds of years after civilization was destroyed by a cataclysmic event, a mysterious young woman, Hester Shaw (Hera Hilmar), emerges as the only one who can stop London — now a giant, predator city on wheels — from devouring everything in its path.  Feral, and fiercely driven by the memory of her mother, Hester joins forces with Tom Natsworthy (Robert Sheehan), an outcast from London, along with Anna Fang (Jihae), a dangerous outlaw with a bounty on her head.

THE SCHOOL (Limited Release)
Shot in Sydney at Tarban Creek Lunatic Asylum, one of Australia’s original asylums, this claustrophobic and terrifying ghost tale is the feature-length debut of writer/director Storm Ashwood. Starring a cast of familiar faces from Australian film and television that include recent MONSTER FEST 2018 guest Nicholas Hope (BAD BOY BUBBY), Megan Drury (MANNY LEWIS) and Will McDonald (HOME & AWAY), THE SCHOOL is a wonderful cinematic nightmare with a visionary technical aesthetic and sheer narrative daring! Amy (Megan Drury) is a doctor, wife and grieving mother who is failing. It’s been two years and she still cannot manage to leave her comatose son David’s side. Amy falls further into her own selfish and twisted world of obsession and denial, blocking out everything and everyone around her. Meanwhile the walls of the hospital she is neglecting begin to fall apart. Awakening in what seems to be an abandoned old school, Amy finds herself a prisoner to a hoard of displaced cultish and feral kids. Trapped in a hostile supernatural purgatory for children, Amy becomes an unwilling surrogate mother and must try and escape an impending evil. As supernatural and psychological terror ensues, Amy must find her way out, fighting against the demonic, supernatural and ultimately her own demons.

Wednesday December 5th
FROG DREAMING
Praise be Umbrella Entertainment for releasing Brian Trenchard-Smith’s seminal 1986 family classic FROG DREAMING to Blu-ray in a world-first! Restored from an all-new 4K scan of the original interpositive and in its original aspect ratio, Umbrella’s release contains a host of Special Features along with reversible artwork. Orphaned 14 year-old Cody (Henry Thomas, E.T THE EXTRA-TERRESTRIAL) is a typical boy with an adventurous spirit and imagination to match. Living with his guardian Gaza (Tony Barry, MYSTERY ROAD) in an outback Australian township, Cody learns of an ancient Aboriginal myth known as ‘Donkegin’, sparking an interest that will not let him rest. Convinced there is an underwater monster in a nearby dam, Cody and his friends Wendy (Rachel Friend, GOLDEN FIDDLES) & Jane (Tamsin West) embark on a journey that will take them into the very shadow-land of mystery and intrigue. Umbrella Entertainment’s Blu-ray is the first and last word in a definitive release with Special Features that include an Audio Commentary, two retrospective interview featurettes (The Go Kids: Looking Back on Frog Dreaming & The Depths of a Legend: Looking Back on Frog Dreaming), a locations revisited featurette (The Dream Quest), extended interviews from Not Quite Hollywood and image gallery.

BLACKKKLANSMAN
Spike Lee returns with his best film in over a decade, so good in fact that it could comfortably sit with the strongest of his oeuvre. At times suspenseful, hilarious at others yet powerful throughout, this is the tightest rolled Spike Lee joint in many years. It’s the early 1970s, a time of great social upheaval as the struggle for civil rights rages on. Ron Stallworth (John David Washington) becomes the first African-American detective on the Colorado Springs Police Department, but his arrival is greeted with skepticism and open hostility by the department’s rank and file. Undaunted, Stallworth resolves to make a name for himself and a difference in his community. He bravely sets out on a dangerous mission: infiltrate and expose the Ku Klux Klan. Posing as a racist extremist, Stallworth contacts the group and soon finds himself invited into its inner circle. He even cultivates a relationship with the Klan’s Grand Wizard, David Duke (Topher Grace), who praises Ron’s commitment to the advancement of White America. With the undercover investigation growing ever more complex, Stallworth’s colleague, Flip Zimmerman (Adam Driver), poses as Ron in face-to-face meetings with members of hate group, gaining insider’s knowledge of a deadly plot. Together, Stallworth and Zimmerman team up to take down the organization whose real aim is to sanitize its violent rhetoric to appeal to the mainstream. Universal’s 4K Ultra-HD & Blu-ray contain an in-discussion conversation with Ron Stallworth, Jordan Peele and the cast discussing working with filmmaker Spike Lee.

YOU WERE NEVER REALLY HERE
Lynne Ramsay (WE NEED TO TALK ABOUT KEVIN) returns with her fourth feature, starring Joaquin Phoenix, this stylish and exceptional film confidently walks a tightrope between hypnotic neo-noir and brutal revenge thriller. A traumatised veteran (Phoenix), unafraid of violence, tracks down missing girls for a living. When a job spins out of control, Joe’s nightmares overtake him as a conspiracy is uncovered leading to what may be his death trip or his awakening.

SLENDER MAN
If you’ve heard that SLENDER MAN is dull, scare-less and instantly forgettable, then you heard right, this one wouldn’t give your Granny a quiver! In a small town in Massachusetts, four high school girls perform a ritual in an attempt to debunk the lore of Slender Man. When one of the girls goes mysteriously missing, they begin to suspect that she is, in fact, his latest victim.

KIN
Australian ex-pats and brothers Jonathan & Josh Baker take their 2014 short, BAG MAN, to feature with KIN. Featuring a score by Scottish post-rock act Mogwai and a stellar cast including James Franco, Zoë Kravitz, Dennis Quad, Carrie Coon and newcomer Myles Truitt. Chased by a vengeful criminal (Franco) and a gang of otherworldly soldiers, a recently released ex-con (Jack Reynor) and his adopted teenage brother (Truitt) are forced to go on the run with a weapon of mysterious origin as their only protection.

THELMA (DVD Only)
After a feverous festival run globally, filmmaker Joachim Trier’s slow-burn spine-tingler THELMA arrives on home entertainment. A lonely young woman discovers she may have supernatural powers. Brought up in rural Norway by her religious and quietly domineering mother (Ellen Dorrit Petersen) and father (Henrik Rafaelsen), painfully shy Thelma (Elli Harboe) has recently arrived in Oslo to begin her university studies. At the library one afternoon, she experiences a powerful seizure, and beautiful fellow student Anja (Kaya Wilkins) is there to help. Developing an overwhelming attraction to her new friend, yet anxious that these feelings betray her beliefs, Thelma begins to manifest a dangerous and uncontrollable power that her parents have long feared.

BEAST (DVD Only)
Writer/director Michael Pearce’s debut feature, BEAST, is quite the achievement, a stunning modern gothic thriller that defies expectation and unsettles with its every move, featuring an exceptional performance by lead Jessie Buckley. Moll (Buckley, TABOO) is 27 and still living at home, stifled by the small island community around her and too beholden to her family to break away. When she meets Pascal, a free-spirited stranger, a whole new world opens up to her and she begins to feel alive for the first time, falling madly in love. Finally breaking free from her family, Moll moves in with Pascal (Johnny Flynn, CLOUDS OF SILS MARIA) to start a new life. But when he is arrested as the key suspect in a series of brutal murders, she is left isolated and afraid. Choosing to stand with him against the suspicions of the community, Moll finds herself forced to make choices that will impact her life forever.

THE LAST SHARKNADO: IT’S ABOUT TIME (DVD Only)
Ian Ziering & Tara Reid return in the sixth and apparently final instalment of SyFy’s SHARKNADO franchise. Fin (Ziering) travels back in time in a Sharknado-turned-time-machine to resurrect his family by stopping the first Sharknado that started it all. In his quest, Fin will fight dinosaurs, knights, cowboys, and, of course, sharks. This time, it’s not a question of how to stop the Sharknados – it’s when!

CAT PEOPLE
Cinema Cult release Paul Schrader’s 1982 eroticised reworking of 1942’s CAT PEOPLE to Blu-ray for the first-time locally! Irena Gallier (Nastassia Kinski) has a dark family secret, one that resurfaces dramatically when she reconnects with her estranged brother, Paul (Malcolm McDowell). Living with her sibling in New Orleans, Irena finds herself enamoured with zoologist Oliver Yates (John Heard), even as her brother makes his own advances toward her. It’s not long before the dark and dangerous curse of the Gallier clan rears its feline head.

THE SERPENT AND THE RAINBOW
Another first-time to Blu-ray locally comes courtesy of Cinema Cult with Wes Craven’s vastly underrated folklore horror, THE SERPENT AND THE RAINBOW. In a time of social and political unrest in Haiti, anthropologist Dennis Alan (Bill Pullman) travels to the torn country to study a Voodoo drug used in religious practices to turn victims into living zombies. With the help of a witch doctor (Brent Jennings) and a fellow researcher (Cathy Tyson), Dennis pieces together the deadly mystery. But as Dennis uncovers the secrets behind the mysterious powder, he must evade the Haitian authorities who view his research as a potential threat.