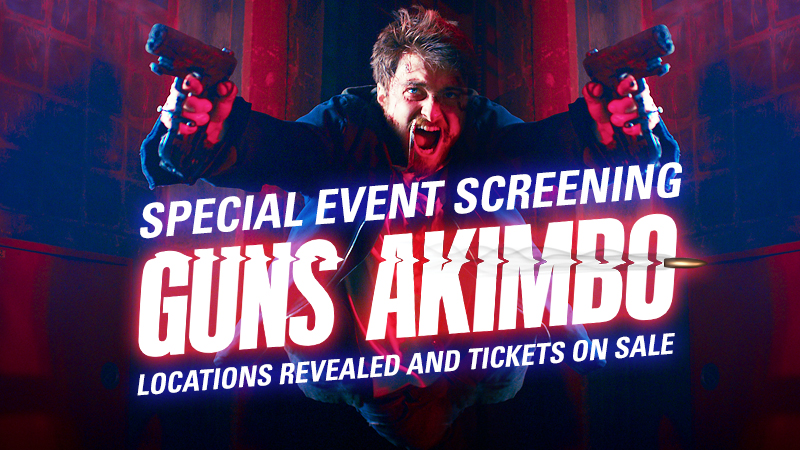 We’re psyched to announce that tickets are now on sale for our special event screenings of Jason Lei Howden‘s GUNS AKIMBO ahead of its March 5 release date! Presented by FANGORIA x MONSTER FEST in association with MADMAN FILMS, you’ll be able to enjoy what Matt Donato from Atom Insider likens to a “Saturday morning cartoon for the criminally insane”  at the following locations on Friday February 28th…

Nerdy video game developer (Daniel Radcliffe, SWISS ARMY MAN) is a little too fond of stirring things up on the internet with his caustic, prodding, and antagonizing comments. One night, he makes the mistake of drunkenly dropping an inflammatory barb on a broadcast of Skizm, an illegal death-match fight club streamed live to the public. In response, Riktor (Ned Dennehy, MANDY), the maniacal mastermind behind the channel, decides to force Miles’ hand (or hands, as it were) and have him join the “fun.” Miles wakes to find heavy pistols bolted into his bones, and learns Nix (Samara Weaving, READY OR NOT), the trigger-happy star of Skizm, is his first opponent.

Ahead of tomorrow's release of THE TOLL in cinemas