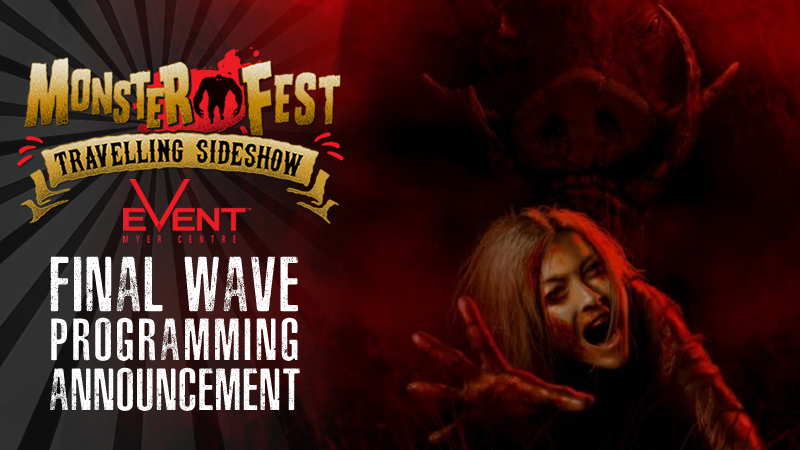 In two weeks from today, MONSTER FEST TRAVELLING SIDESHOW rolls into Event Cinemas Myer Centre from May 25th to 27th for a host of international, Australian and Brisbane premieres.

Making its Australian Premiere is the latest exercise in terror from MARTYRS filmmaker Pascal Laugier, GHOSTLAND, which takes the horror of home invasion and twists it into a tension-filled and taut modern slasher.

Our last two announcements for our Brisbane leg of MONSTER FEST TRAVELLING SIDESHOW work as perfect companions to one another. First up is the Australian Premiere of WOLFMAN’S GOT NARDS, a lovingly crafted feature-length documentary on the enduring legacy of the 1987 classic THE MONSTER SQUAD, directed by André Gower, who played Sean in the film. Finally we are pleased to host a retrospective screening of Fred Dekker’s THE MONSTER SQUAD, a kick-ass celebration of Universal Monsters and everything eighties that pits a motley bunch of kids head-to-head with a legion of ghouls.

In the harsh yet beautiful Australian outback lives a beast, an animal of staggering size, with a ruthless, driving need for blood and destruction. It cares for none, defends its territory with brutal force, and kills with a raw, animalistic savagery unlike any have seen before. Believed nothing more than a myth, a legend brought to life by a drunken local, the beast ventures closer to civilization, closer to life, and ultimately, closer to death. It’s brutal, it’s bloodthirsty, it’s BOAR.

Following her aunt’s death, Colleen and her daughters inherit her house. However, during their first night in their new home, murderers enter the home, putting Colleen in a situation where she must fight to save her daughters’ lives. When the girls suffer a terrible trauma during the night, their disparate personalities diverge even further. The eldest daughter, Beth, is said to become a famous horror author with a perfect family and life in Los Angeles, while her sister, Vera, can’t cope and loses her mind faced with an unshakable sense of paranoia. Sixteen years later the daughters and mother reunite at the house where Colleen and Vera continue to reside. It is then that strange events begin to take place.