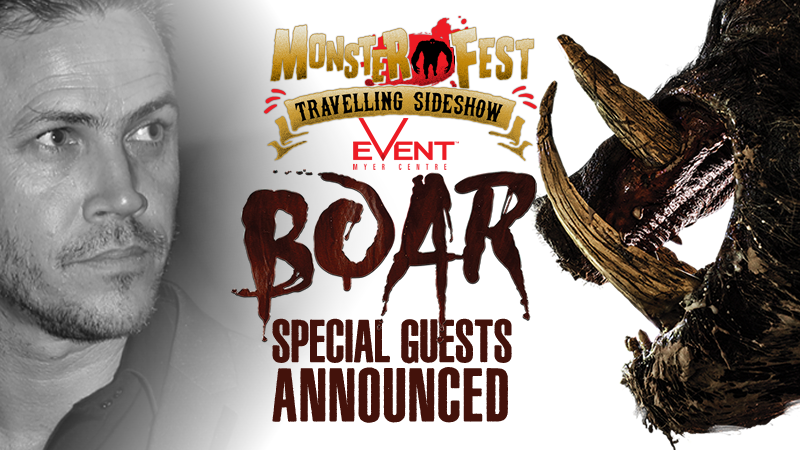 Joining us for our MONSTER FEST TRAVELLING SIDESHOW Brisbane screening of BOAR at Event Cinemas Myer Centre on Sunday May 27th is writer/director Chris Sun and producer Christine Hulsby.

About CHRIS SUN
Born in Queensland, Australia in 1975, Chris was named after legendary actor ‘Christopher Lee’, who played Dracula on-screen no less than ten times, so horror was destined in his blood from an early age. However it wasn’t until in his thirties that Chris decided to write and direct horror films. His first experience as a film writer, producer and director was his debut feature COME AND GET ME in 2010 (Distributed by Camp Motion Pictures in the USA). But it was in 2012, that his second feature film, DADDY’S LITTLE GIRL (Distributed by Eagle Entertainment in Australia and Breaking Glass Pictures in the USA) sent ripples throughout the independent film industry in Australia and made waves internationally. CHARLIE’S FARM, Chris’ third feature film, secured Shoreline Entertainment as the sales agent with Chris himself managed by Shoreline’s management arm. Where most horror filmmakers struggle with practical special effects, Chris excels adding more production value to his projects by drawing on his extensive special fx artist skill set. No wonder Chris is fast becoming ‘the master of horror’ in Australia. Following the release of CHARLIE’S FARM, wrote his first novel ED, despite having never read a book in his life, published by Source Point Press out of the USA, the novel  has gone to sell over 3,000 hard copies in Australia alone. Now Chris returns with BOAR, a story of a monster pig the size of a mini van who rampages through the Australian outback destroying anything and killing anyone is his way. Chris Sun’s directing style is certainly putting Australia foremost as the home of great solid genre films!

About CHRISTINE HULSBY
With a background in event and artist management, Christine first stepped into the film industry working alongside veteran music producer Roberto Merlini during the 2014 pre-production of THE FOURTH WALL. Taking that experience and gaining necessary skills, Christine quickly became a fast player in the movie making business. Teaming up with Chris Sun for BOAR, Christine helped complete the film as production manager, progressing to Producer and is now working closely with the post-production team. In 2016, Chris and Christine launched Sun Entertainment as their new film and entertainment company. The first event Christine will organise under the Sun Entertainment banner will be the Australian premiere of BOAR in conjunction with Universal Pictures Australia. In 2018 Christine is looking forward to directing her first feature film and cementing herself as a solid filmmaker around Australia and abroad.

About BOAR
The giant BOAR was a myth, a legend brought to life in a drunken pub tale. The thing about myths and legends, they are usually made up of partial truths, and in this case, complete and terrifying truths. Tearing a path of destruction through fencing and livestock, locals haven’t a clue of the chilling death that lurks in the striking Australian outback. The Monroe’s are on a road trip to reconnect with a life they left behind several years ago. Seeing old friends and loved ones bring the tight knit family even closer together. A spontaneous decision to picnic along the shores of a cool river three hours from town brings them face to face with death itself. A BOAR of staggering size with a taste for blood is cutting out a crude home in the bush, and has marked this area as his. Nothing can stand in its way, nothing can stop the destruction. While the boar continues its savage rampage, the Monroe’s settle in for a quiet afternoon, and an evening of wild pig and roo spotting. As they are slowly and savagely stalked and slaughtered by the beast, the fight for survival becomes as animalistic and brutal as the animal itself.