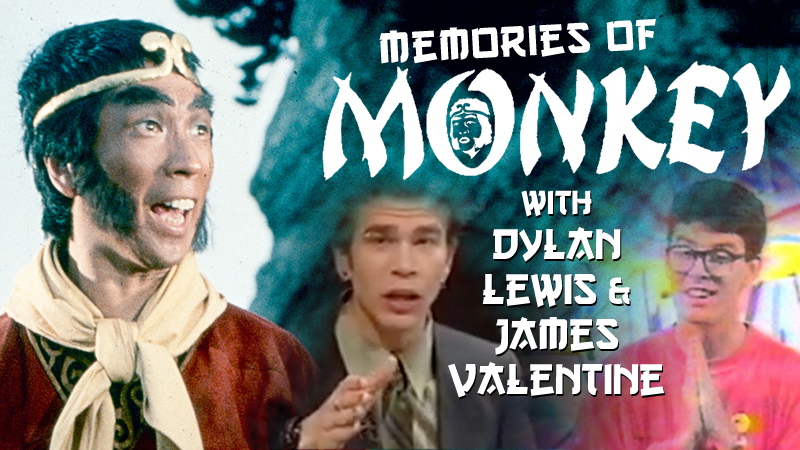 Japan’s most famous television export (pre-POWER RANGERS), Nippon TV’s MONKEY has made its high-def debut on Blu-ray this week courtesy of Umbrella Entertainment, as a complete series collection with both seasons and all 52 episodes!

As we revel in its release, we  reached out to the two men most responsible for unleashing the glory of MONKEY – or MONKEY MAGIC as it was referred to on the mean streets of primary school playgrounds around the country – upon several generations of unsuspecting Australian children to see what they remembered about this most iconic of TV series.

Were you familiar with Monkey before you presented the show?

Hahaha no, and I was no more familiar with it afterwards, really. It was a very strange, very bizarre show. I’d never heard of it before and it made no sense to me why we were playing a dubbed Chinese myth show with fart jokes. We’d just done GRANGE HILL and played things like DEGRASSI JNR HIGH and PRESS GANG. MONKEY didn’t make sense to any of us. The AFTERNOON SHOW was made out of the Children’s And Education Department at the ABC, the people who made PLAYSCHOOL and BANANAS IN PYJAMAS who were basically gatekeepers of childhood. They study it, are totally concerned about what children should be watching and suddenly we’ve got this Samurai looking TV show and we couldn’t figure out what was going on. I remember asking the head of programming why have we got this and he said it turned up in a package of other stuff that we [the ABC] bought so we kind of got it for free, so we just put it to air. And that was that.

What did you think of the show?

I was mystified by it. It was very odd and bizarre yet strangely beguiling with these lovely characters. There was a friendly feel to it and from memory they had quite intriguing stories. I ended up watching a fair bit of it. Not that I was sitting there in the studio watching it as it went to air. We just made it look like I was. Sorry if that destroys anybody’s childhood illusions. But I would watch all of the new shows and if I liked any of them, I would end up watching a lot more, which is what happened with MONKEY. And I seem to remember quite enjoying it.

Were You surprised by its popularity?

Yes! That was the other thing that didn’t make sense. Why was the thing so popular? Why did people love it so much? I think it must have just leapt out of the telly, where everything else just looked the same, either young adolescents having a drama or a standard looking cell animation of some sort, here was this thing where you go ‘What?!? That is just nuts’ – And the other thing to remember about afternoon children’s television is that it is watched by a lot of people who are stoned. I think MONKEY was absolutely perfect for people having their afternoon cone.

Do you have any favourite moments or elements of the show?

I don’t think I can remember it in that much detail, hahaha. When I run into people who mention it I can remember enough to do a quick Monkey impression which is enough to get a laugh, but that’s about it these days. 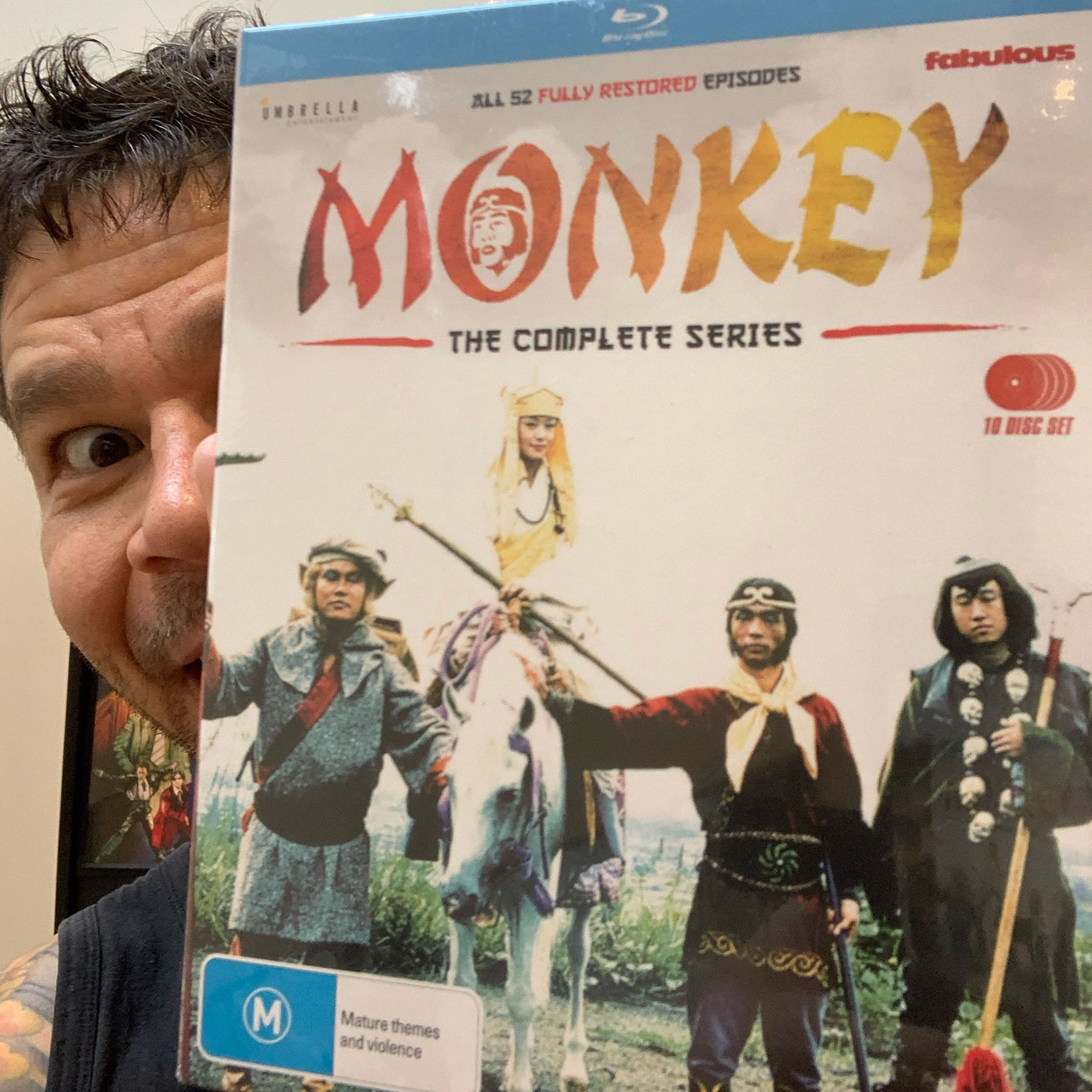 Were you familiar with Monkey before you presented the show? If so how did you discover it?

Yes. Very much so. I grew up in a time before internet and streaming, so ABC was my only source of entertainment. Monkey Magic was my fave. I used to watch James Valentine on the afternoon show every day. Loved him and loved all the shows he presented, especially Monkey! The other shows I loved were The Goodies, Grange Hill, Danger Mouse, Roger Ramjet, Doctor Who and Inspector Gadget.

I remember one time James had a competition where you had to write a poem about the shows he presented. I wrote a rap, but sadly never sent it in. I can still remember it!

I watch Monkey Magic every night on the box
If Tripitaka was a girly, I bet she’d be a fox
Then my posse and me watch Danger Mouse
We take it in turns at each other’s house…”

There’s more…but I’d better stop now – I’m realising it was probably a bit wrong for a kid to be writing stuff like that! Hey – I was into Beastie Boys, and their influence is quite apparent in those stanzas.

Deep down, I’d still like James to hear my rap – just to see whether I might have won!

What did you think of it?

It was the best. The perfect combo of martial arts and spirituality. I played Monkey Magic all the time in the schoolyard – wasn’t too bad at staff spinning either! I actually still do a bit of fire-twirling – as a direct result of being influenced by Monkey!

I’m pretty sure my spiritual training as a youth was all from Monkey too. I loved the lessons I accidentally learnt from watching the show.

Were you surprised by its popularity? Why do you think it is still so popular?

I guess I am a bit surprised at the popularity of the show – mostly because of the overdubbing. I didn’t care about that as a kid, and I still don’t care. I think it adds to the charm. I’ve introduced my kids to it now, and they, like me, love it to bits! I know there have been remakes of it, I’ve watched a few of them, but nothing beats the original. The actors are just so beautiful and endearing.

I have noticed there’s some new Monkey Lego sets out now too called Monkei Kid. It looks pretty rad and I want it all. There’s even a little cloud for Monkey to ride on! I’m hoping there’s gonna be a new telly show about it soon!

Perhaps the ancient tale of Journey To The West is such an important and archetypal message, the story is still relevant, hence it’s enduring popularity?

Any favourite elements of the show?

I always loved Monkey’s cloud. It was a character unto itself. Between the cloud and the staff spinning, that’s pretty much how the games went when we played it in the schoolyard. The finger thing whilst Monkey’s blowing…I had that down pat!

I also loved when the demons saw the light and were redeemed. I think that taught me a bit about the fact that everyone has a story, and everyone deserves a go at redemption.
A stand out scene in the series was in episode 1. Monkey travels across the world to find the 5 pillars (Buddha’s hand) – not realising it’s the Buddha’s hand, he does the world’s first graffiti and basically writes “Monkey was ‘ere”! I think he then does a wee on the ‘pillar’.

I loved that. The cheekiness of Monkey is so ace. And the lesson that Buddha is everywhere and everything is taught in such a perfect way…a way which I, as a young kid, could totally identify with!

Who was your favourite character?

Even though I’ve always had a soft spot for Pigsy and his antics, Monkey was always my fave. When we presented Monkey Magic in the 90’s as part of Recovery, we did a magazine cover to celebrate it, and I got to be Monkey. The best. Geez, it suited me too (despite the eyebrow ring)! Jane Gazzo was Tripitaka and Leigh Whannell was Pigsy! And The Enforcer…he was Buddha! Gold. Good times!

MONKEY – The Complete Series is now available on Blu-ray & DVD and features all 52 Episodes including the ‘Lost’ 13 Episodes that were never-aired on the ABC, spread across a 10 Disc Set and with 2 Episode Guides broken up by Season 1 & 2.
Also included as a downloadable extra are PDF scans of all the 39 original BBC dubbing scripts and for the more adventurous out there we have it on good authority there may be an Easter Egg worth hunting for too!

You can grab it here now!