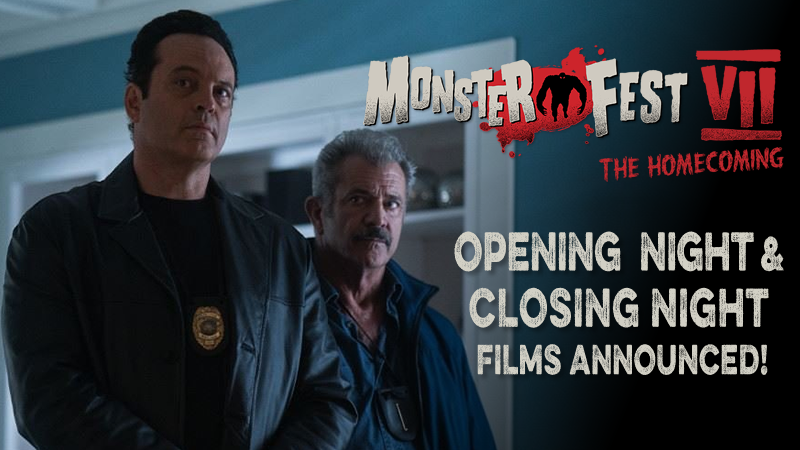 As MONSTER FEST VII: THE HOMECOMING draws nearer, we are pleased to reveal our Opening & Closing Night Films, both of which will be making their Australian screen debuts.

From the critically acclaimed and celebrated modern auteur, S. Craig Zahler, the genre mashup master responsible for BRAWL IN CELL BLOCK 99 and BONE TOMAHAWK, we are pleased to present the Australian Premiere of DRAGGED ACROSS CONCRETE as our Opening Night Film. This hardboiled and highly anticipated crime thriller stars Mel Gibson and Vince Vaughn as a pair of old school cops whose ill-fated plan to swipe the proceeds of a crime spirals out of control into a world of intense violence and retribution. Packing all the brutally confronting violence, strong characterisation and complete disregard for political correctness that Zahler is beloved for, alongside flawless performances from Gibson and Vaughn, this mix of visceral action and soulful character study sets the perfect tone of bone-crunching festival fun!

Closing the festival with a piercing death growl is the Australian Premiere of LORDS OF CHAOS. Set in the world of Norwegian death metal, and combining an 80s period setting, the blackest of black humour and brutally visceral scenes of violence, LORDS OF CHOAS is ‘metal’ in every sense of the word – and an experience you’re sure to never forget. The only thing crazier than the film itself is the fact it’s based on the very real – and very violent – actions of an infamous Norwegian death metal crew. Drawing from his experience as the drummer in a black metal band, director Jonas Åkerlund brings a level of authenticity to the screen rarely seen along with the unmistakable style that made his music video work so memorable.

A stolid, old guard policeman, Ridgeman (Mel Gibson) and his volatile younger partner, Anthony (Vince Vaughn), find themselves suspended when a video of their strong-arming tactics become the media’s special du jour. Low on cash and with no other options, these two embittered soldiers descend into the criminal underworld to gain their due, but instead find far more than they wanted awaiting them in the shadows.

Screens with Short Film: HERE THERE BE MONSTERS
Drew Macdonald | Australia 2018 | 14 Minutes | World Premiere
To escape incessant bullying on the bus ride home, a young girl falls asleep only to wake up trapped at an empty bus yard, with something lurking outside – something big – and if she wants to make it out alive, this frightened girl will have to unleash a monster of her own.

Screens with Short Film: FEAST ON THE YOUNG
Katia Mancuso | Australia 2017 | 13 Minutes | Australian Premiere
A troubled teenager must save her little sister from a bloodthirsty fairy lurking in the forest before it devours them both.

Check out everything announced for the festival so far including THE HOUSE THAT JACK BUILT, PIMPED, CAM, 30 MILES FROM NOWHERE, PUPPET MASTER: THE LITTLEST REICH & BURNING KISS right here!

The 5 Film Multi-Pass may be used for any Monster Fest film sessions from Friday November 23rd to Sunday the 25th EXCLUDING Opening Night and the All-Night Marathon.

The VIP Pass gets you all-access to all Monster Fest screenings from Thursday November 22nd to Sunday the 25th.

HOW TO USE YOUR PASS
When you purchase a pass you will receive a barcode number which shows up on your booking receipt. This number can be used online or in person to book sessions in advance or during the festival. If for any reason you do not receive a number/barcode, please contact 9347 5331.

Online Redemption: To use this code online, select the sessions you wish to attend as though buying tickets, and it will give you the option of entering the redemption code.

Box Office Redemption: Present barcode at the box office and let staff know which sessions you want to attend.