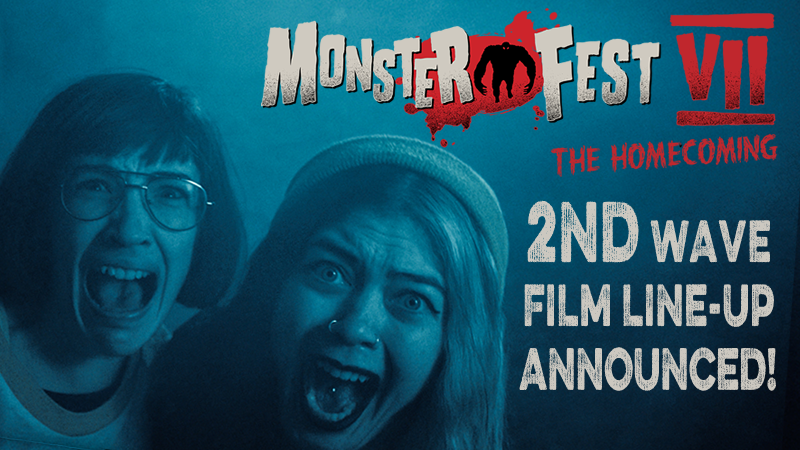 With a little less than two months to go before MONSTER FEST VII: THE HOMECOMING returns to its unholy birthplace of Cinema Nova, we’re pleased to reveal our second wave programming that’s guaranteed to get genre fans salivating in anticipation!

Making its World Premiere is 30 MILES FROM NOWHERE, a cabin-in-the-woods styled thriller from award-winning Australian filmmaker Caitlin Koller, that stars a host of familiar faces including Carrie Preston (THE GOOD WIFE) & Rob Benedict (SUPERNATURAL). This exercise in visceral horror follows six friends who venture to a remote cabin after their passing of an old college friend however their peace is soon interrupted by a series grisly and disturbing events. Soon, they find themselves trapped, hunted, and faced with the choice to kill or be killed.

Following its Australian Premiere at Monster Fest Travelling Sideshow in Perth, we’re pleased to bring Robbie Studsor’s nightmarish noir BURNING KISS to Monster Fest for its Victorian Premiere. The film follows a detective (Richard Mellik) seeking vengeance from a hit-and-run that killed his wife and left him wheelchair-bound – but when a young stranger (Liam Graham) claims responsibility for the crime, he concocts a complicated and dangerous plan for retribution that puts his daughter (Alyson Walker) in terrible danger. Anchored by HOUNDS OF LOVE actor Liam Graham, sizzling with sun-drenched Lynchian imagery and pulsing with a thick atmosphere of gothic dread, BURNING KISS has all the elements to be the next big Aussie genre hit!

Our next feature defies easy description – neither horror nor sci-fi adequately capture the utterly surprising, practical-effects packed and above all genuinely disturbing experience of watching THE FOAMING NODE. This mockumentary follows a cult obsessed with a comatose man who inexplicably leaks foam from his mouth – while they gradually fall prey to insanity and disturbing bodily transformations. Directed by acclaimed Australian artist Ian Haig, whose multi-media work has been showcased everywhere from the ‘Centre Georges Pompidou’ in Paris to the ‘Museum of Modern Art’ in New York, the film puts on clear display his obsession with twisted distortions of the human form. Described as ‘Lars von Trier meets David Lynch’ – alongside a healthy dose of Cronenbergian body horror – this is a once-in-a-lifetime viewers experience for all viewers of daring cinema.

After the untimely death of their old college pal, five friends (and one new girlfriend) descend upon the Wisconsin summer home they frequented in their 20s. The creep factor at the cabin is high, with a thumping in the crawl space, blood spurting from the pipes, and a cockroach infestation in the guest bedroom. When a storm moves in, trapping them in the woods, they find themselves faced with the ultimate human dilemma, to kill or be killed, in order to make it to morning. 30 MILES FROM NOWHERE is a thriller about what fear does to the human brain, and how an ordinary citizen becomes an unwitting soldier.

Screens with Short Film: THEY CAN’T HEAR YOU
Luke Creely | Australia | 6 MinutesA young woman is held captive, bound, and given an ultimatum by her captor – find a way to escape in only a few minutes, or be killed.

It’s been 6 long years since the hit and run accident that put disgraced former detective Edmond Bloom in a wheelchair and killed his wife Juliette. With the killer never identified, Edmond spends his days pouring over clues under the care of his submissive 20-year-old daughter Charlotte whom he indirectly blames for the tragedy. On a hot summer’s day, a broken and remorseful stranger appears claiming to be the driver of the car the night of the accident and begs Edmond for either forgiveness or punishment. With the killer now revealed, Edmond can finally get closure on what happened. The problem is, Edmond didn’t catch him and there’s no way he will let 6 years of hard detective work go to waste. Instead of seeking retribution for the past, he concocts a selfish and dangerous plan involving himself, the stranger and his daughter. Guilt, desire and resentment surface as the plan spirals out of control…

Screens with Short Film: COCKY
Aaron McLoughlin | Australia 2018 | 14 Minutes
A pet cockatoo hatches a plan to end the mundane conversations in his life.

The Foaming Node essays the discovery and emergence of new bodily organs in meticulous and captivating detail. We follow the last remaining observers, members of a cult of sorts, who have experienced both the transmissions of The Foaming Node, and their own personal and strange bodily transformations. They discuss exactly how the changes associated with The Foaming Node have affected them, telling fascinating, visceral, detailed tales that reach beyond science, alternative medicine, and corporeality.

WHAT METAL GIRLS ARE INTO
Laurel Vail | United States | 15 mins

DEAD THINGS – Shorts Program | SUNDAY NOVEMBER 25TH 2:30PM
Terrifying, hilarious and brazenly weird, MONSTER FEST’S program of horror and hybrid-genre shorts featuring stories of the dead, the undead and those in between.

AFTER SCHOOL SPECIAL – Student Shorts Program | SATURDAY NOVEMBER 24TH 4:30PM
MONSTER FEST’s showcase of student shorts from some of the best film schools around the country, featuring the work of current students and 2017 graduates.

Check out everything announced for the festival so far including THE HOUSE THAT JACK BUILT, PIMPED, CAM, PUPPET MASTER: THE LITTLEST REICH right here!

HOW TO USE YOUR PASS
When you purchase a pass you will receive a barcode number which shows up on your booking receipt. This number can be used online or in person to book sessions in advance or during the festival. If for any reason you do not receive a number/barcode, please contact 9347 5331.

Online Redemption: To use this code online, select the sessions you wish to attend as though buying tickets, and it will give you the option of entering the redemption code.

Box Office Redemption: Present barcode at the box office and let staff know which sessions you want to attend.