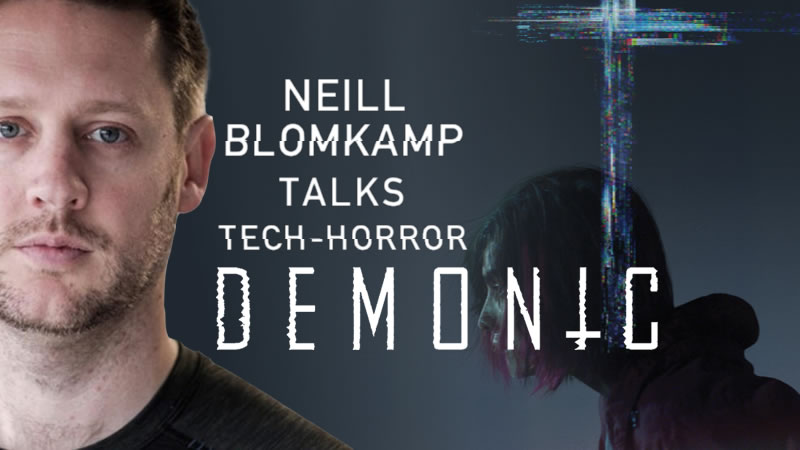 While the world was on-hold last year during the height of the pandemic and subsequently all studio productions paused, Neill Blomkamp (DISTRICT 9, CHAPPIE) made the decision to produce DEMONIC, an independently financed and contained feature that would utilise locations within British Columbia where he was living at the time.

When Carly Spenser (Carly Pope) learns that her estranged mother Angela (Nathalie Boltt) has fallen into a coma, she reluctantly agrees to take part in a cutting-edge therapy that will allow her to tap into Angela’s still-active brain and communicate with her. Observed by physician Michael (Michael J. Rogers) and neuroscientist Daniel (Terry Chen), she enters a harrowing simulation of Angela’s mindscape where she discovers the powerful supernatural force that drove her mother to commit unspeakable acts of violence nearly two decades earlier. Afterward, haunted by terrifying visions, Carly joins forces with her old friend Martin (Chris William Martin) as she desperately tries to fend off the monstrous demon before it can enter a new host and inflict more pain and suffering on the world.

With DEMONIC hitting Blu-ray, DVD & Digital this week, Monster’s Jarret Gahan caught up with Neill for a chat about the film.

I understand that Demonic was produced during the pandemic, but how long had the concept for the film been with you, and what was the genesis of that idea for the film?

The film is a result of the pandemic, so the film didn’t exist before March 2020. I can remember in 2010, thinking about wanting to do a self-financed small horror film like PARANORMAL ACTIVITY, so for more than a decade I’ve wanted to do that, and I just never seemed to have the right time or the right moment to do it, and the pandemic, with everything slowing down, felt like a good time to just do that, for fun. Once I decided to do that, then I took a few different elements that I wanted to make into something at some point, like if you’re familiar with the Oats Studio stuff we’ve been doing online, the volume metric capture was actually going to be used in Oats at some point, and we’d spent two years speaking to this company in LA, this awesome company Metastage, about doing VolCap and what it would require, and just the way to think about how production would work, and so my mind was fully in that zone, but not in features, more in an experimental way.

Then when the pandemic happened, and it was like let’s do our PARANORMAL ACTIVITY, I took this idea and figured out how to put it into a longer feature-length narrative, and come up with a way to justify why it looks so glitchy and low-fi. Then I also had this other idea about the Vatican acting more like a nefarious, giant global corporation, which was actually a much bigger idea. That concept would have been a much bigger film if I had done it traditionally. I had those elements, and then I had this mother-daughter idea as the story engine. Then we looked around at the locations we had access to around us, and the film is literally the result of those things we put into a blender.

DEMONIC is quite different to your prior work in that it’s void of humor; there’s no satire about it. Was this a conscious decision based on working within the horror genre, or was it something that you had wanted to do for some time irrespective of genre?

Yeah. I definitely don’t think that I was following any kind of rule book in terms of the genre, because the genre also, in fact, has science fiction in it too, so I wasn’t handcuffed by any of that. It was more a case of, I purposefully wanted to do something that had absolutely no quirk to it at all. The primary directing goal of mine was, firstly, to make something that felt very small scale and intimate, and very close to Carly. Then, secondly, to try to restrain everything, so there was almost a feeling of controlled restraints, that would hopefully result in a layer of anxiety that ran underneath the movie, like a layer of tension, like a slow burn, that was there the whole time, and those are my goals. My other stuff is insanely satirical, even if Elysium seems dead serious, the idea of a Gucci encrusted space ring is complete satire. That’s my natural default, it’s like merging TERMINATOR 2 with Monty Python, I’d be somewhere in that zone, but this was not that. I just didn’t want any of that.

With a modest budget comparatively with your studio films, DEMONIC has maintained that cutting-edge visual style, and now you did speak about the VolCap before. Can you tell us a little bit about how you were able to achieve the look of that simulation?

Yeah, like I was saying, speaking to Metastage in LA, when the borders closed with the pandemic, we ended up being forced to find out how to do it in Canada, and we actually found this amazing company in Vancouver, BCS, that’s run by Tobias Chan, and he built the rig for us and did all of the computation afterwards. The best way to think of it is kind of like three-dimensional video, but it’s not actually video, its three-dimensional geometry, three-dimensional video geometry. It’s like having a video game character that’s viewable from any angle, but you’re capturing a three-dimensional stage play, and then later, you’re choosing your camera angles of how you want to film it, way later, like months later. When you do it, there’s just 250 4k cameras surrounding the actors.

They just act like it’s a play because there’s no one directional camera that they’re acting to, and then you spend months processing that data, so you crunch it into geometry, and then once that’s ready, you can load it up in an engine, like Unity, and then view it from any angle. Once you have that, which is a couple of months down the line, then you bring in your environments, which was her childhood home or the Sanitarium, and you three-dimensionalize those as well and bring them into the same system, and then they exist together. Then you begin setting up virtual cameras and film it two-dimensionally for the audience to watch in a film, but if audiences wanted to, those scenes will be downloadable in 3D, like a video game engine, right?

You could wear VR goggles, but you could also use a mouse and a keyboard and move through the environment. 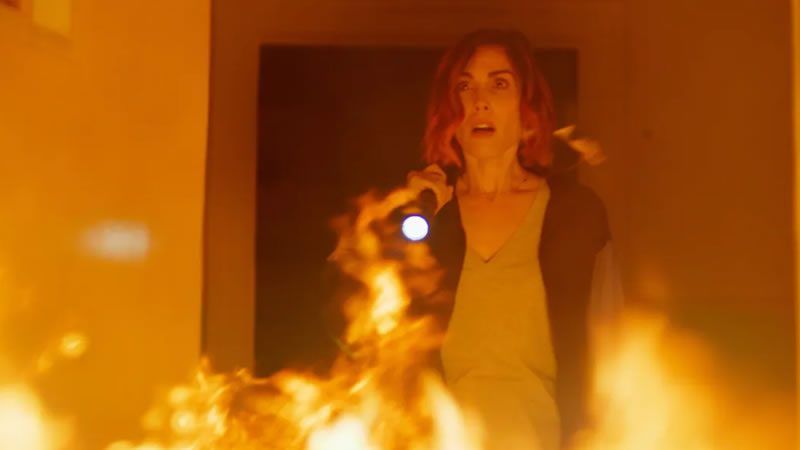 I can imagine you would have had a lot of time to work on it given the lockdowns but what was the post process like?

There’s two components, right? The one component is the volumetric capture itself, and then you need highly specialized volumetric capture professionals to be able to three-dimensionalize that video. That’s one part of the equation, you’re waiting to get the, not raw, but the initial three-dimensional files, and that takes a few months. Once you have that, that got sent to our more traditional VFX company, which is this awesome company in the Czech Republic called the UPP. They got all of the assets, which are these three-dimensional stage plays of the scenes in the movie, and then they drop them into the 3D environments, that we also shot with two-dimensional photography, that they three-dimensionalize. Then once you’re in that phase, that starts feeling a little bit more like normal VFX, because then you can hold a virtual camera and actually film inside scene.

You can walk wherever you want and move lights, like when she goes into her mom’s bedroom and there’s that kind of cyber-punk, like red light coming into the room, cutting through the blinds, you could just move that. You could do whatever you want, but you adjust it and film it with your actual virtual camera to get scenes to feel the way that you want them to feel. The thing that’s weird is it’s running in a real-time engine, so there’s no rendering. You film it like you’re filming a movie, which is super bizarre. You’re basically deciding on one angle that you want to show the audience, but it’s live at any point, so those scenes are still just existing like live environments, right now, which is weird.

Being an independent project, what kind of creative freedom did that give you with the film comparatively with working with a studio on film?

Honestly, it’s not that different. I suppose the thing that’s different would be at a higher budget level, a studio would have maybe argued a pushback mark against the idea of volumetric capture because it’s so early, but like I was saying before, the movie is a result of wanting to use that stuff, so maybe that’s a benefit, but in terms of actual day to day stuff, it’s either the same or slightly more difficult because you don’t have the resources that you want. From a creative standpoint, it’s much more difficult because you can’t just put giant imagery on screen, or scenes, drawing scenes on screen.

With DEMONIC being your first foray into horror, is there a thought of you revisiting the genre down-the-track?

I really like horror, definitely. Yeah. I’m interested in a lot of genres, but horror is definitely one of them, and I could completely see myself being back in it. I think, again, it may have a somewhat modern or science fiction technological slant to it. I don’t know if I’d be into it if it was just 1000% classical horror, but maybe I would be.

It’s well-documented your history with the ALIEN franchise, but is there any other established IP or franchise that you’ve wanted to work your own take on?

The fact that so far you’ve authored original properties thus far is terrific and sticking to your guns in doing so refreshing. What do you hope audiences will take away from DEMONIC after seeing it?

That’s an interesting question. The reason that I wanted to do it from a directorial perspective was to try to create this feeling of a slow burn, like this unease that just felt like it was simmering under the movie, and that doesn’t really sound that appealing, but maybe it is appealing to people who like horror, so I would say that could be cool.

Personally I feel you’ve succeeded with that. All the very best with DEMONIC’s release in Australia. Thank you for the chat, Neill.

DEMONIC is Out Now on Blu-ray, DVD & Digital 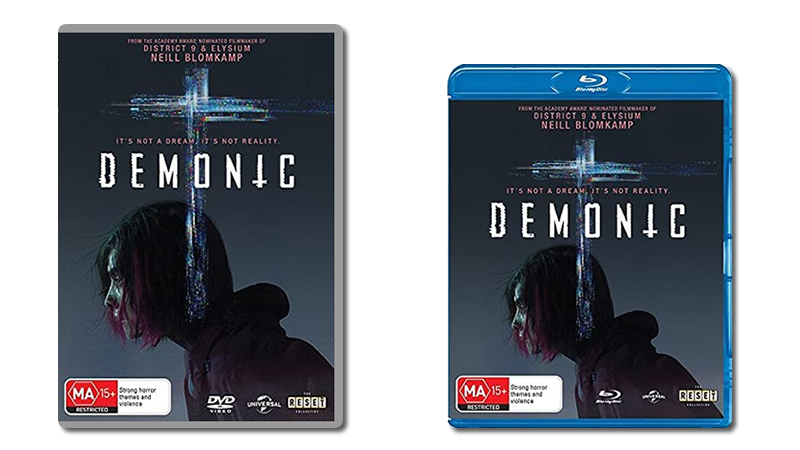