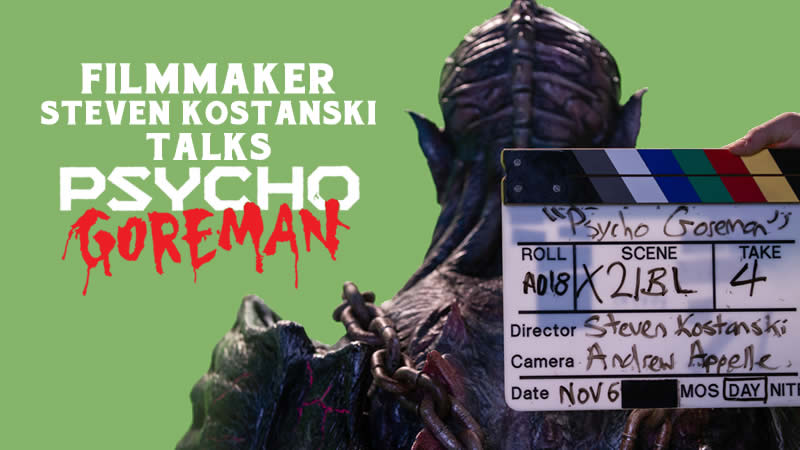 Winner of the 2020 MONSTER FEST Audience Award, PSYCHO GOREMAN is a hilarious tale of an alien overlord who becomes enslaved by a pair of Earth children.

With a background in prosthetic FX, Steven Kostanski’s pays a wholehearted homage to the action-packed genre films of the 80s and 90s. With skillfully-crafted costumes, prosthetics and – of course – gore, PSYCHO GOREMAN is a film filled with nostalgia for the era of video rentals.

With PSYCHO GOREMAN out now on Blu-ray as part of Umbrella Entertainment’s Beyond Genres series, we thought we’d catch up with Steve to talk about the film. 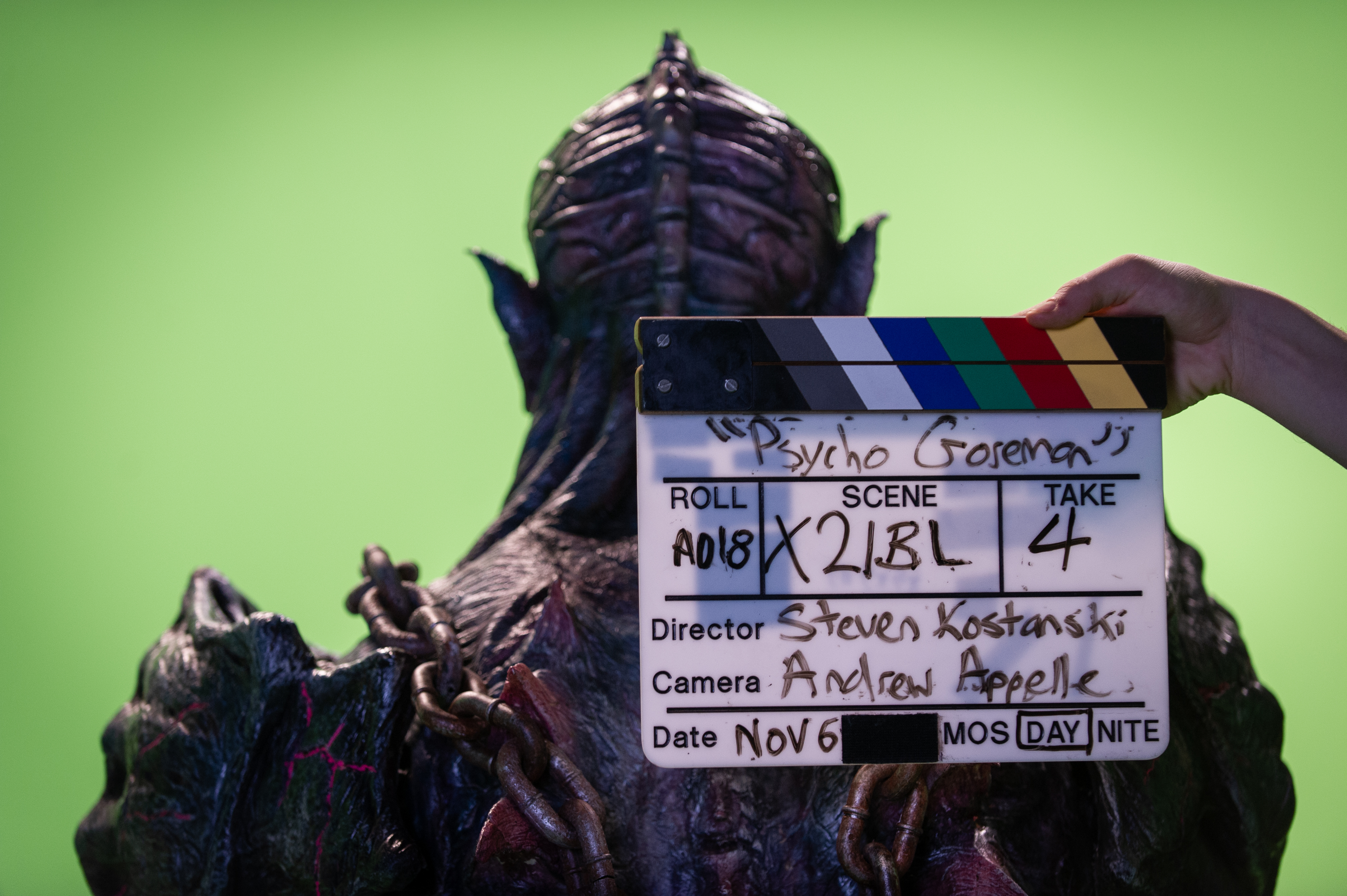 The script, which you also wrote, is hilarious at the most unexpected times. I love PG’s love for “Hunky Boys” – it caught me off guard in the best way. How was integrating that comedy and that tone? Did you write what came naturally to you or were you aiming for something specific?

I don’t really have much of a writing process – I write what I know and what I like. But in the process of writing my script and my story, I kind of second-guess what I’m doing and start making fun of my thing before I’ve even made it. It’s part of me having anxiety about not particularly enjoying writing, or wishing I was a better writer. I’m always looking at the scenes I’m coming up with and nitpicking them and drawing attention to them when they’re not working in funny ways.

It’s not like you’re watching the movie itself – you’re watching me also watch the movie with you and I’m making fun of my own movie. That’s an extra layer I try to add in the writing process. It’s almost like I find a problem in the script and instead of solving the problem, I find a way to make the problem into a bigger joke and draw more attention to it.

It also stems from my obsession with watching movies and picking apart movies. I think it’s a lot of people’s experience, watching movies with friends: you rent some crappy horror movie and you’re making fun of it with your buddies. That communal experience has bled into the filmmaking process where I can’t take things too seriously. I’m always making fun of stuff and finding ways to subvert traditional ideas and tropes and then do things that undermine the foundations of storytelling in really goofy ways. It’s just my way of trolling my own movie.

It’s very self-reflexive but it never feels forced and still feels pretty sincere at times. How did you balance that? Or did it happen naturally?

The treatment that I wrote initially – [the one] that I pitched to producers that everybody signed off on – is very much what the final movie was. There weren’t any big shifts in terms of the structure of specific beats. The outline I came up with is what the movie is.

So much of the movie was an intuitive experience as well. I just really trusted my gut on what felt right for the story and I think a lot of that comes from me obsessing over a very specific type of movie, which I feel like PG is part of and represents: 80s and 90s lower-budget genre films that wanted to be bigger than they were. My love of those tropes helped inform the pace and the direction of that film. Because I’m so obsessed with that stuff, it was easy for me to let it go with the flow of the story and trust that it was going in the right direction. My subconscious is just so embedded and imprinted with those narrative structures that I just knew where the movie needed to go – when I wanted to embrace the emotional payoff of those structures and when I wanted to take the time to rip them apart. 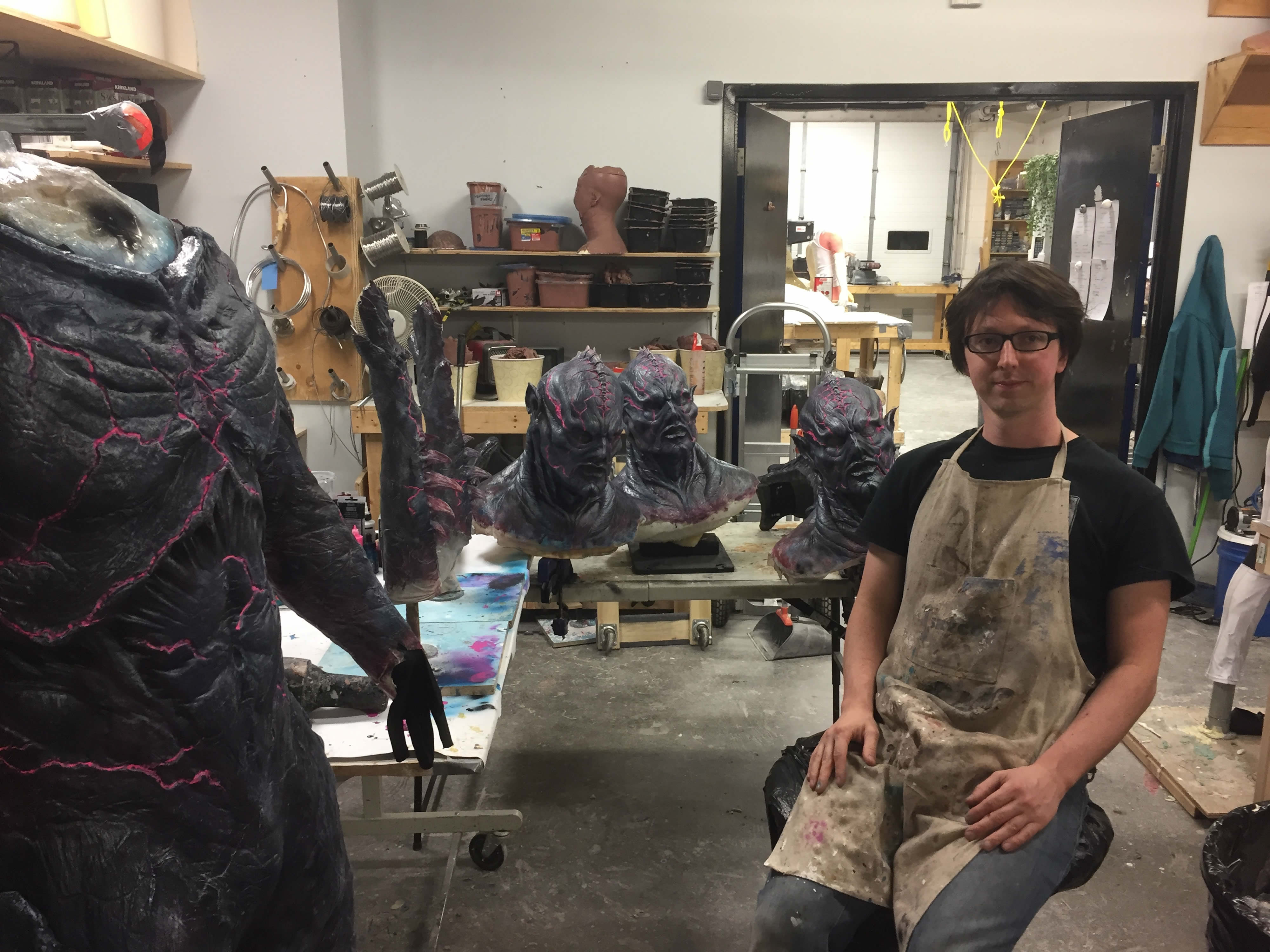 The fight scenes in particular felt very 80s/early-90s. I got big POWER RANGERS vibes. What were your influences in those fight scenes? Did you have to really analyse the choreography of those influences?

I really just let our fight choreographer go nuts with what he wanted to do. One of the best things about this movie was that the whole team – Alex, stunt coordinator; Andy, DOP; Scott, first AD – was on the same page. They all just got it like, “oh, it’s this kind of movie”. They all understood it so it was really easy to just let people run with stuff. With Alex, we were just so in-tune all the way through that it was easy to figure out what the choreography would be and the specific kind of look and tone we wanted these fights to have.

On a more practical level, we were so in-tune that it was easy to shift based on circumstance. It was a very low-budget movie; we obviously planned for things to be way bigger than they actually were. On the day, we had to scale stuff back and change it, so thankfully Alex always had a plan B when I would come to him and be like “we don’t have time to do this big bit of choreography you came up with. What can we do?” He knew how to pivot and scale down and accommodate what I wanted and still give me what I wanted without compromising the vision too much.

It was great working with him, coming up with these fights. We both grew up on stuff like POWER RANGERS and we’re huge MORTAL KOMBAT fans. It was really easy to put that trust in him, knowing he would come up with stuff that fit the vibe and tone of the movie.

There’s so much POWER RANGERS and HIGHLANDER and MORTAL KOMBAT and all these things. Everybody had a tonne of fun with it and were all totally on the same page as to where it needed to be.

If you don’t mind me asking, what was the final budget?

Under one million Canadian – I can say that. That’s not a tonne of money to make the scale of movie we tried to make. It’s kind of unheard of to even attempt that. It was a movie [where] we really had to call on all the low-budget tricks to make it happen.

There’s a lot of shooting inserts on weekends, people volunteering to help out, coming down to the shop and shooting, melting heads of the miniatures and stuff. Because there was no way to get all the stuff that’s in the movie into the days we had to shoot it. There’s a lot of being really efficient and a lot of late nights, not getting paid, just trying to shoot as much as we could to make it happen. It’s a lot of people donating their time just because they’re passionate about the project, which I really appreciate. 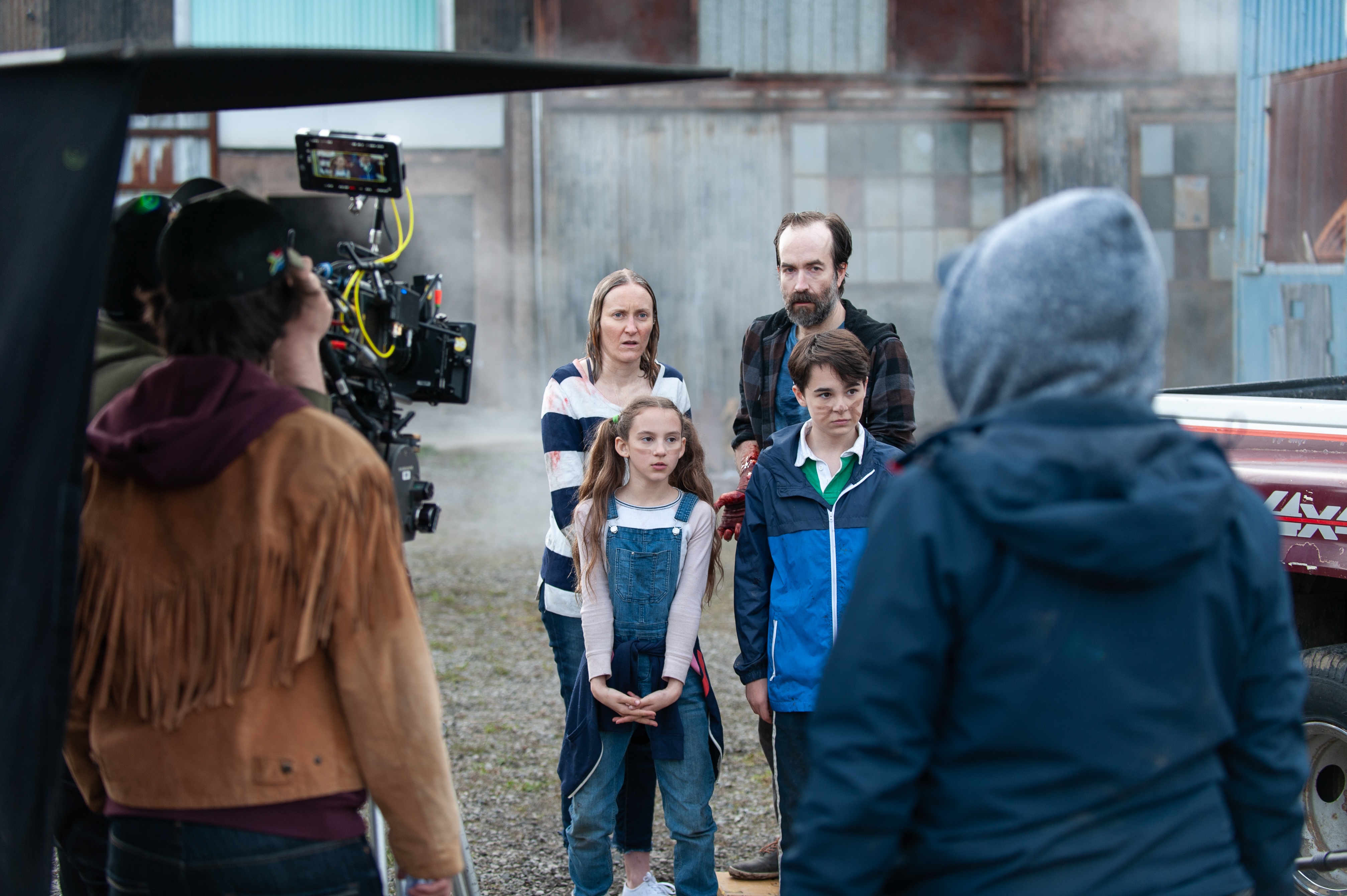 I got Adam to star as Greg, the dad in the film. I wrote that part for him specifically. Conor and Matt show up in it as well as different characters. I try and include those guys as often as I can, in as many ways as possible. They’re my buddies and I love working with them. They always bring something to the table and are just super talented actors. It would be impossible for me to make a movie that didn’t include them in some way.

In the film, you reversed the trope of Darkness V. Light and made Darkness the “hero” of the film. What made you choose a religion to be the ultimate representation of “goodness” and law?

Really, it’s just me commenting on a trope that is in a lot of movies from that era: the religious zealot is a thing that shows up in a lot of genre movies that [I saw] as a kid growing up. I always found it kind of weird that they always leaned on that as the villain. I wanted to embrace that and bring that back because we haven’t seen it in forever. It made sense because the idea is that they’re “good guys”. And really, on paper, they are good guys: they’re trying to maintain some kind of order and sanity in the galaxy.

I don’t think I’m making a comment on religion. It’s just a trope I wanted to play with because I love the idea of making fantasy-religion iconography that a bunch of characters support. As you can see in a lot of the more fantastical scenes in the movie, I like leaning into the sci-fi nonsense at any chance I get. It’s a fun thing that I’ve always loved in movies – building that kind of mythology that doesn’t really mean anything but it’s just fun window-dressing to enhance your characters.

I thought it would make for a fun parallel between PG and Mimi as well because you see PG crush that cross in a flashback. [In having] Mimi do the same, I wanted to bring back the idea of like, “is she becoming as horrible as he is? Is this the path she’s headed down?”

My composer, Martin, actually asked the question, “Is this movie like a Rita Repulsa origin story? Is this the start of a little girl becoming an ultimate villain?” I thought that was really interesting so that was my way of fostering that idea and trying to tease that potential by having a religious presence that both our characters completely disrespect.

I do call into question what is good and evil and show that it’s just a grey area across the board. But there’s also a strong case that can be made that PG is just bad! There’s no lesson that’s learned. He doesn’t become good at the end of the movie so was Pandora really that bad? Maybe [her being] misguided and not as skilled a fighter as PG is ultimately what it comes down to.

PSYCHO GOREMAN is out now on Blu-ray, DVD & Digital 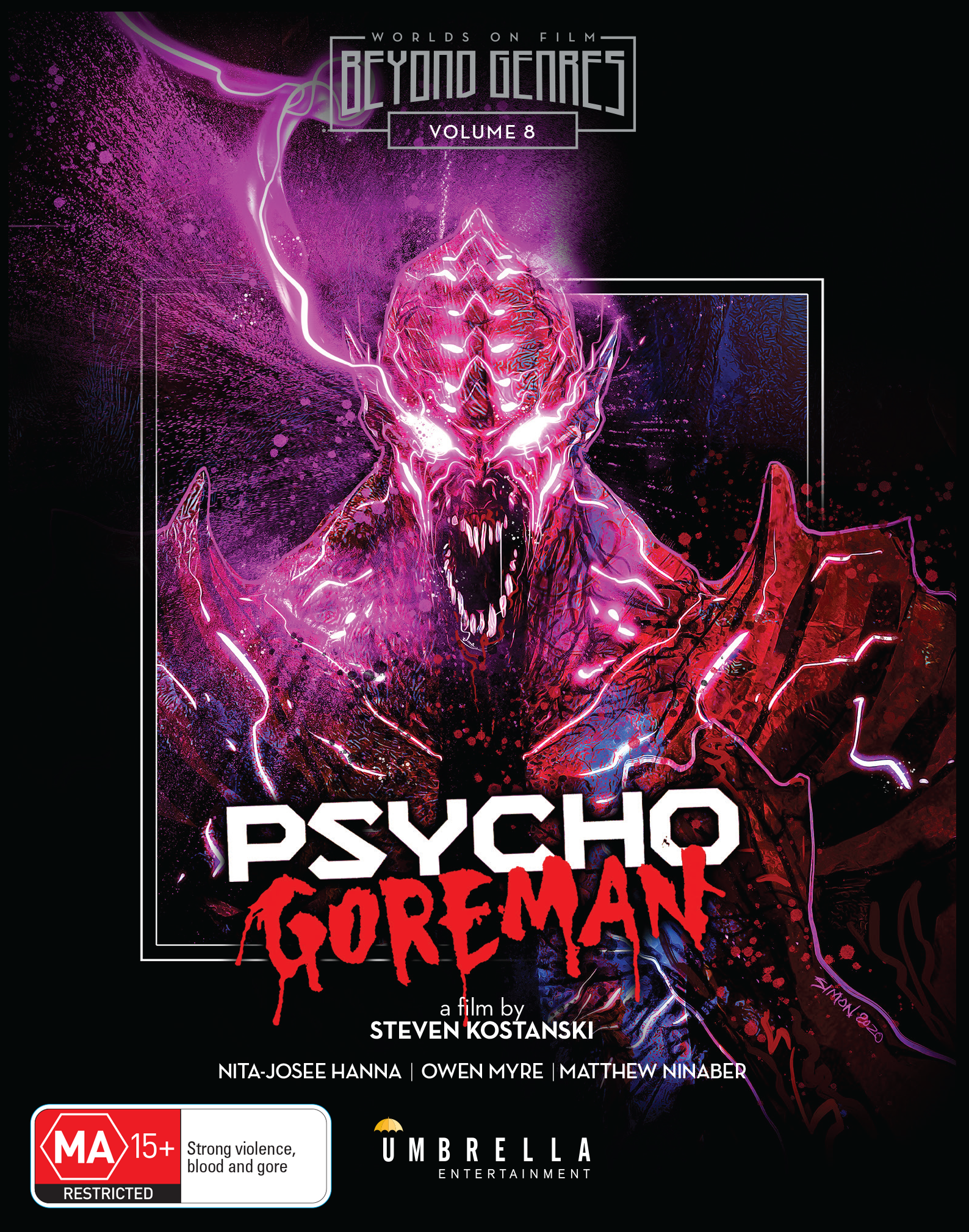