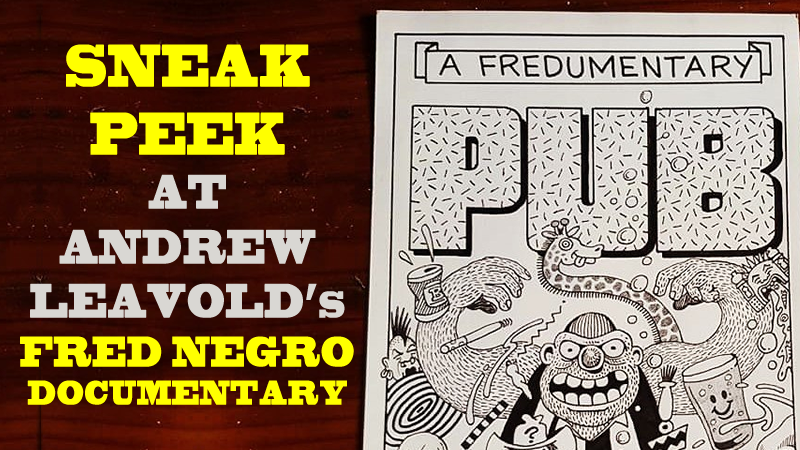 Get A Sneak Peek At Andrew Leavold’s PUB: THE MOVIE!

He’s an author, lecturer, film historian and filmmaker…he’s Australia’s very own renaissance man, Andrew Leavold, (THE SEARCH FOR WENG WENG) and he has an all-new passion project brewing, PUB: THE MOVIE.

PUB: THE MOVIE is a feature-length documentary on Melbourne ratbag, troublemaker and cultural provocateur, Fred Negro: artist, satirist, musician in four decades of bands, diarist who chronicled his life and the cultural pulse of St Kilda for more than thirty years in his “PUB” strip, barfly, family man, Collingwood supporter, and unofficial Mayor of Melbourne’s St Kilda.

In order to get this documentary made, Andrew’s calling on your support with his recently launched Kickstarter crowdfunding campaign but first have a squizz at this teaser trailer for PUB: THE MOVIE…

As mentioned prior, PUB: THE MOVIE has been a passion project for Andrew, having worked years on shooting interviews with key collaborators and cronies of Fred along with live performances and amassing an archive of photos, recordings, gig videos, newspaper clippings, fanzines, fliers, TV appearances and much more. This will be the definitive Fred Negro documentary mark our words!

Money raised from the campaign will go toward the final stretch of production that includes legal and financial representation of the production along with completing the remaining interviews (which are tentatively due to be shot in April/May 2020). The aforementioned need take place before funding bodies are approached with the intention of helping to finance the post-production of the film.

By backing Leavold’s project, you are not only helping to bring a story that need be told to the screen but you are also eligible for a host of fantastic rewards that include everything from an invite to an Exclusive Screening of Andrew’s debut feature LESBO-A-GO-GO (in a double with its tell-all expose GONE LESBO GONE: THE UNTOLD TALE OF AN UNSEEN FILM!) to rare Gig Posters to limited edition ‘Best of Fred’ DVDs to PUB: THE MOVIE T-Shirts to Associate Producer credits on the finished film!

Get behind PUB: THE MOVIE and support the crowdfunding campaign now!

If you live in Melbourne, come on out to The Dog’s Bar in St. Kilda for the campaign’s official launch with a live performance THE PEPTIDES!