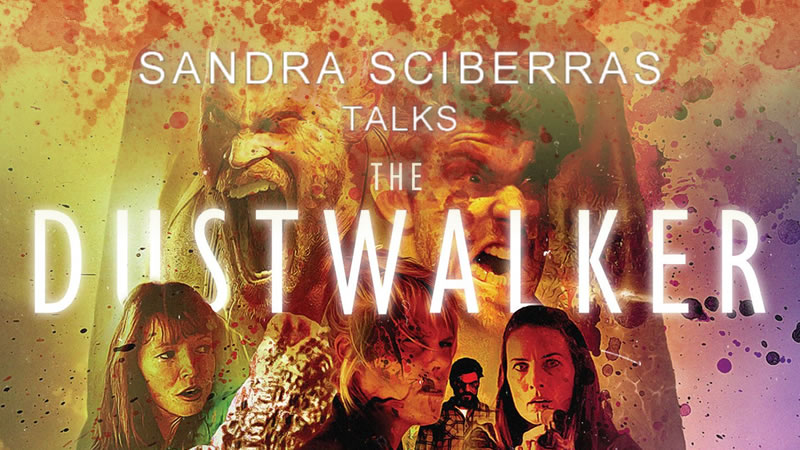 Starring Cassandra Magrath (WOLF CREEK), Jolene Anderson (LIVING SPACE) and Harry Greenwood (THE NIGHTINGALE) amongst others, THE DUSTWALKER is a new Australian sci-fi/horror film from director Sandra Sciberras, which adopts a popular sci-fi sub-genre and nestles itself amidst the harsh landscape of the Australian outback. Having premiered at MONSTER FEST 2019, it also boasts a uniquely Aussie take on the ever-popular body snatchers and pod-people motif.

Speaking with us recently Sandra enthusiastically explains the crux of her film. “It’s that classic story about a small town in the middle of the Australian desert, that red amazing desert, and an alien drops a virus. The townspeople have no idea what is turning the people who they love into these strange murderous human-beings. They’re not zombies, they’re not creatures, they’re humans.” adding “So it’s that conflict of ‘do I shoot them? Do we not shoot them?’ Is this an American western where we would shoot everybody, or is this actually Australia where we don’t run around shooting people as much?‘”

THE DUSTWALKER is her fourth feature film, which also marks her first foray into the science- fiction and horror worlds. Having previously directed dramatic stories like THE CATERPILLAR WISH (starring Susie Porter and Wendy Hughes) and SURVIVING GEORGIA  (starring Pia Miranda and Shane Jacobson), Sandra explains her motivations for switching gears and reveals a surprising source of inspiration.

“I love the genre. I was that classic kid who grew up on the original THE BLOB. I watched all of those films. All of those Roger Corman films, and at the same time I love drama. I love American indie cinema and I love British horror, so for me it was always that combination of drama and good characters at the same time as good horror. So for this one I needed a hybrid. I wanted to play with where I came from, which was traditionally drama, and I wanted to use landscape really well, and then one of my favourite genres is monster movies.”

Elaborating on the origins of THE DUSTWALKER, Sandra humbly admits that the idea came to her while on a cheesy television binge. “It’s a funny story how it started, and this is so stupid” she says with an awkward smile “but one summer I had to sit and watch every single episode of LOST. And if anybody knows LOST, this show goes on and on and on and I had to do it because I’ve got two amazing sons, and we got struck into it. Then somewhere between – I don’t know what bloody season it was – I started seeding this idea of an alien accidentally dropping a virus that they’d have to clean up. I don’t know why I came up with it but I just started writing it. And then I thought about TREMORS and some of my favourite kind of films like THE CRAZIES. So as I was writing I was just thinking about those kind of films.”

The distinction between THE DUSTWALKER and her previous films is glaringly obvious and when asked about the challenges of this genre over the other, Sandra instinctively responds “The visual effects!” Despite being a modest low budget movie its ambition is certainly much greater, and when it came to executing her story with its on-screen monster, she admits that learning new tricks was part of the reason she made the film at all. “There were challenges in the genre itself, and in the action sequences. I was always wanting bigger and more, and then with time and restrictions getting smaller and smaller” she says with a regaled smile. “So then all of a sudden we had to get a second unit in because we thought ‘oh my god we’ve got to shoot this thing in twenty days’. And in this case I also had a one hundred percent CGI monster, and I’ve got to tell ya, that was interesting. I wrote this script to teach myself things because I wanted to learn how to shoot one hundred percent with CGI.”

Of course exploiting her newly acquired skills also meant surrounding herself with lots of experienced people and Sandra proudly admits that her crew made a big job much easier. “I was really glad that I had a post-production team with me, and I had the right director of photography and gaffer, and we all worked together, and any questions that I had – that I didn’t have the answers for – there was somebody else there that would help me work out (for example) green screen in the middle of the desert.”

One of the film’s most memorable and – admittedly, notorious – sequences involves the attack of a small child, and when put to her that Australian cinema often explores the child-in-peril trope in a more graphic way to American cinema, Sandra was quick with a gleeful response to her favourite scene in the film. “Yeah I would have gone more! I totally would have gone more. Yeah, I think it has a place. It eases the tension and it’s spooky, and it’s wrong on so many levels. You know, ‘you don’t mess with kids’ but we know that the world does. And so in this film I just messed with it in the worst way possible. I think it’s a great scene and there was a lot of tossing up about how much we see and what we see, and I did have a couple of versions of how you see it and I obviously opted for what’s in the film.”

And with that Sandra was quick to reiterate “But it’s not a blood thirsty film, you know? It’s not a zombie film or a film where everyone gets eaten.” adding with a wry smirk “Maybe in my next one.”

THE DUSTWALKER arrives to home-entertainment following a tumultuous and staggered release around the world thanks to the Covid-19 pandemic. Following its MONSTER FEST premiere in 2019, it was released theatrically in Japan and Vietnam where it performed well before being released in the UK under the title ALIEN PARASITE, followed by a US release at the Boston Science Fiction Film Festival. And now, following various local Covid lockdowns, it finally makes its way to DVD courtesy of Umbrella Entertainment.

THE DUSTWALKER is now available on DVD.