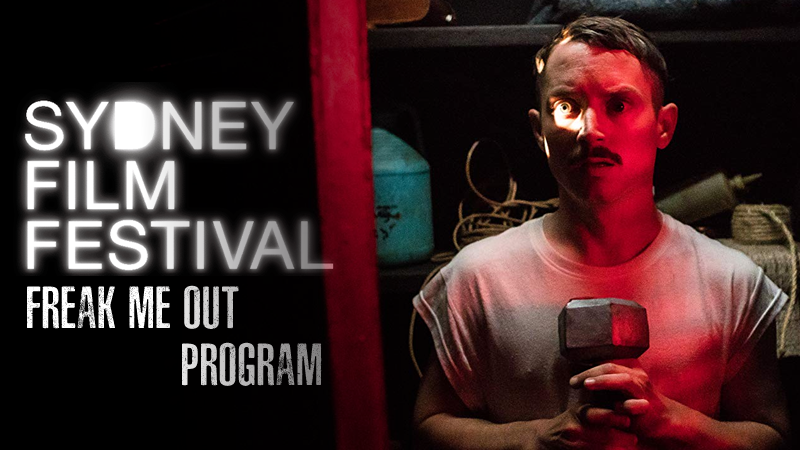 FREAK ME OUT Genre Film Program at SYDNEY FILM FESTIVAL!

SYDNEY FILM FESTIVAL returns on June 5th to celebrate the creme de la creme of international and local cinema. Boasting an impressive lineup across its twelve days, SFF will be spruiking some a-grade genre films within its FREAK ME OUT program. Test the waters or dive right into this sensational collection of spooky flicks. You won’t be disappointed – maybe just a little scared.

DANIEL ISN’T REAL
Adam Egypt Mortimer‘s mind-bending psychological horror DANIEL ISN’T REAL follows a troubled teen who in an effort to overcome a devastating trauma, reawakens his childhood imaginary friend with dire consequences. As a troubled boy, Luke’s bestie was imaginary playmate Daniel. That’s before Luke’s mentally ill mother forced him to lock Daniel away. Luke’s now a socially awkward student whose counselor suggests he “unlock” his old friend. It seems like a great idea – at first. Daniel’s become a smooth-talkin’ cool cat who helps Luke hook up with artist Cassie. But there’s something much deeper and darker on Daniel’s extremely twisted mind. This exercise in emotional duality and urban paranoia is a cosmic fever-dream that lingers long after the end credits have rolled.

COME TO DADDY
From the delightfully warped minds that brought you THE GREASY STRANGLER comes Ant Timpson‘s neo-surrealistic, hilarious and thoroughly engaging COME TO DADDY, an intimate and isolated tale of Norval (Elijah Wood) who travels to a a remote cabin by the seaside to reconnect with his estranged father (Stephen McHattie). 35-year-old Norval (Elijah Wood) hasn’t seen his dad since he was five. Out of the blue he receives a heartfelt letter asking him to visit. What’s a nervy and needy son to do except drop everything and trek out to dad’s funky, flying saucer-shaped house in the middle of nowhere? It’s an understatement to say that Norval’s desperately longed-for bonding with his father gets off to a rather shaky start. And things just get worse…much worse.

DEPRAVED
Mary Shelley’s classic has inspired countless films since 1910. It’s to the enormous credit of indie horror king Larry Fessenden (Wendigo) that Depraved feels so fresh. Frankenstein Castle is now a warehouse in Brooklyn occupied by Henry, a doctor haunted by memories of soldiers he couldn’t save in Iraq. Bankrolling Henry is his ambitious businessman buddy Polidori. Then there’s Alex, who wakes up after being stabbed and slowly realises he’s the brain inside a stitched-together body named Adam. But is Adam any different from every other lost soul in New York? A scary, tense and darkly comic tale laced with hallucinatory imagery and driven by powerful emotion, Depraved is one hell of a horror movie.

THE WIND
We’re not riding the range with cowboys in this highlight of Toronto’s Midnight Madness programme. We’re inside one of those cabins in the middle of a windswept nowhere, where women fended for themselves while men conquered the land and other men. Caitlin Gerard (Insidious: The Last Key) is superb as Lizzy Macklin. Her grip on reality begins to crumble in the long absences of husband Isaac, as she battles isolation, madness and spiritual demons. Flashbacks and flashes-forward show the couple’s intriguing relationship with neighbour Gideon and his flighty and superstitious wife Emma, who believes demons roam the prairie. This beautifully photographed tale grabs you from its explosive opening scenes and never lets go.

HERE COMES HELL
I say now, what the Dickens is this? A tip-top comic horror pastiche, I’ll be bound! The awfully good debut by director Jack McHenry and co-writer Alice Sidgwick unfolds in a classic Old Dark House. Cravat-wearing toff Victor just bought the decrepit pile and has invited his chums for the weekend. Delightfully drawn archetypes in attendance include acid-tongued socialite Christine, dishy tennis player Teddy and his nervous new girlfriend Elizabeth. The thing is, you see, Victor’s new digs are supposedly haunted, and he thinks it’d be simply capital fun to hold a séance. What follows is wonderfully witty and bloody entertainment with a jolly good bolt of modern girl-power lightning, to be sure.

WHY DON’T YOU JUST DIE!
Revenge, blackmail and spectacularly dysfunctional family dynamics are the dishes served up in 29-year-old Kirill Sokolov’s dazzling debut. The deceptively simple story centres on Matvei, a nervous young guy who arrives at a Moscow apartment with a hammer in his hand and murder on his mind. Inside is Andrei, a hulking police detective and father of Matvei’s girlfriend, Olya. It’s not long before all blood-spurting hell breaks loose and Sokolov’s non-linear screenplay gives us the meticulously mapped-out dope on everyone involved in the mounting mayhem. This furiously-paced fireball is fabulously performed by a game cast and marks the arrival of an exciting new talent on the world cinema stage.

Screening on Sunday 9th of June and Thursday 13th June

For more information or for the festival’s full program, check out their website here!