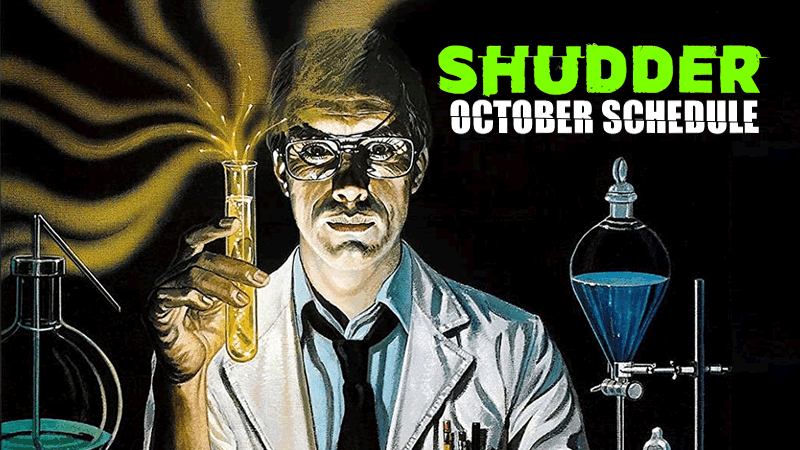 SCARE ME dropped yesterday on SHUDDER and kicked off their October schedule and today they’ve revealed the remainder of what new content you can look forward to throughout this glorious month and it features no less than four new SHUDDER Originals as well as some all-time genre classics!

Two estranged brothers reunite at their missing father’s video store in order to organise his affairs. But as they dig through the deserted store and the myriad 80s artefacts, they discover a unique VCR board game called ‘Beyond The Gates’ that may prove a connection to their father’s disappearance. Dare they play the mysterious game and traverse an inter-dimensional hub into a nightmare world where their father’s soul is trapped?

America is lost in the darkness and decay of a Vampire epidemic as survivors cling together in rural pockets, fearful of sunset and the vicious feral beasts that define their living nightmares. When seventeen year-old Martin is orphaned after a marauding vampire destroys his family he is taken under the dusty wing of a battle-weary drifter called Mister. Bonded by a glimmer of hope, they forge a formidable fighting team and travel from town to fortified town, joined by a displaced nun, a pregnant woman and a disillusioned Marine in search of a far-off frontier called New Eden. Surrounded by hungry vampires and the opposing force of a fundamentalist militia known as The Bretheren the stakes are well and truly raised for a bloody battle royal.

Reverend Max and his best friend Drew have a hit web show where they make a pretty good living faking exorcisms for hundreds of thousands of fans until the evening a real demon takes over and terrorizes their crew.

When a conservationist is sent to Ireland with his wife and infant child to survey an area of forest believed to be hallowed ground by superstitious locals, his actions unwittingly disturb a horde of demonic creatures who prey upon the lost. Alone and deep within the darkness of the remote wilderness, he must now fight back to protect his family against the ancient forces’ relentless attacks.

Justine, a teenage girl joins her sister at a prestigious veterinary college, and is forced to partake in a hazing ritual that sees her defying her vegan upbringing by consuming raw rabbit liver. From here she develops an insatiable desire for flesh – of all types, and what we witness is a coming-of-age like no other, an awakening that is carnal and primal and that takes its central character, and its viewing audience, on a journey that is simultaneously harrowing and beautiful.

Somewhere deep in the Australian outback there’s a marauding, indestructible creature that can rip a man in half and destroy a homestead in seconds. This giant freak of nature is nine hundred pounds of tusk and muscle – and it is hell bent on terrorizing the small isolated community of “Gamulla” – a town as violent and primitive as the beast that threatens it.

After a member of her tribe sets fire to an American soldiers’ camp during the War of 1812, a young female Mohawk finds herself pursued by a ruthless band of renegades bent on revenge. Fleeing into the deep woods, Mohawk youths Oak and Calvin, along with their British companion Joshua, confront the true horrors of war and the terror of the darkest night as they’re hunted by the bloodthirsty Colonel Holt and his small army of soldiers. As the Americans seem to close in from all sides, leaving a massacred trail of destruction behind them, the trio must use every resource available to stave off brutal execution at the hands of the sadistic soldiers. But the warrior spirit is strong in Oak and, before the sun rises, her pursuers will discover the full power of a righteous spirit unleashed.

On the cusp of retirement, an eccentric mortician recounts several of the strangest stories he’s encountered in his long career, but things take a turn for the phantasmagorical when he learns that the final story – is his own.

DRAGULA RESURRECTION will journey throughout the nation for in-depth conversations with every artist the place they reside and work, observing their course of as they create their distinctive appears to be like. The opponents might want to design three unique Halloween-themed appears to be like and provides a hauntingly good efficiency filmed at haunting and horrifying real-world places, together with an deserted Georgia prepare station and a haunted mansion within the woods of North Carolina. Also, anticipate musical company like pop princess Kim Petras and homosexual nation artist Orville Peck.

Dr. Hal Raglan experiments with “Psychoplasmics”, a radical therapy designed to release pent-up emotions in his patients. He keeps his best and brightest patient, ex-wife Nola, in isolation. But as she successfully vents her rage and expels her demons during the sessions a series of brutal murders occur outside the institute. What is the connection between Raglan’s methods and these monstrous killings? The answer will unleash a whole new breed of terror!

Attempting to resurrect their failing marriage, Peter (John Hargreaves) and Marcia (Briony Behets) set out on a camping trip to a deserted stretch of the Australian coastline in the hope that a long weekend in the sunshine will help them patch up their differences.
They trample through the countryside, destroying everything in their tracks, carelessly scattering their rubbish and shooting anything that moves.
Their callous disregard for the environment soon becomes apparent when the animals start to seek vengeance. Marcia and Peter have proved themselves to be wanton destroyers. Can they leave, or will they be destroyed?

Conducting clandestine experiments within the morgue at Miskatonic University, scientist Herbert West reveals to fellow graduate student Dan Cain his groundbreaking work concerning the re-animation of fresh corpses. West’s secret reagent is a powerful injection with the capacity to give life where there is none – destined to capture the imagination of the entire scientific community. However, between life and death is a thin thread of understanding and when obsession gets the better of West, there is no stopping his wicked ways – dead or alive!

It’s 1976. The Olmedo family has left the countryside for a new life in Madrid. But their new home becomes a house of horrors in this hit supernatural thriller based on actual paranormal events.

Though Greg Nicotero and his team are hard at work shooting season 2 (coming in 2021), they’ve crafted a fully animated CREEPSHOW special for us just in time for Halloween, featuring two tales to die for: “Survivor Type,” based on the short story by Stephen King and adapted by Nicotero, stars Kiefer Sutherland as a man determined to stay alive alone on a deserted island no matter what the cost. “Twittering from the Circus of the Dead,” based on the short story by Joe Hill and adapted by Melanie Dale, stars Joey King as a teen whose family road trip includes a visit to the gravest show on earth.

In this taut psychological thriller by Karyn Kusama, the tension is palpable when Will shows up to his ex-wife Edens dinner party. The pairs tragic past haunts an equally spooky present: Amid Edens suspicious behaviour and her mysterious house guests, Will becomes convinced that his invitation was extended with a hidden agenda. Unfolding over one dark evening in the Hollywood Hills, The Invitation blurs layers of mounting paranoia, mystery, and horror until both Willand the audienceare unsure what threats are real or imagined.

Suzy Banyon, a young American ballet dancer arrives at a prestigious European dance academy run by the mysterious Madame Blanc and Miss Tanner. But when a series of bizarre incidents and horrific crimes turn the school into a waking nightmare of the damned, Suzy must escape the academy’s unspeakable secret of supernatural evil.