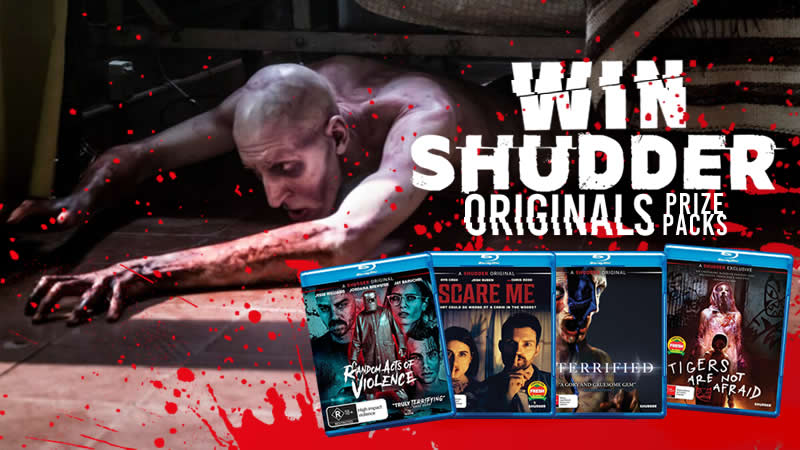 Acorn Media have just released RANDOM ACTS OF VIOLENCE, SCARE ME, TIGERS ARE NOT AFRAID and TERRIFIED on Blu-ray & DVD and we’ve got 6x SHUDDER Original Movie Prize Packs to GIVEAWAY.

Led by incredible casts including Jesse Williams (THE CABIN IN THE WOODS), Jordana Brewster (FAST & FURIOUS), Jay Baruchel (THIS IS THE END), Niamh Wilson (HEMLOCK GROVE) in RANDOM ACTS OF VIOLENCE and Aya Cash (THE BOYS), Josh Ruben (YOU’RE THE WORST), Chris Redd (VAMPIRES VS THE BRONX) in SCARE ME.

RANDOM ACTS OF VIOLENCE
Comic book creator Todd Walkley (Jesse Williams), his wife Kathy (Jordana Brewster), assistant Aurora (Niamh Wilson) and best friend, Hard Calibre Comics owner Ezra (Jay Baruchel), embark upon a road trip from Toronto to NYC comic con and bad things start to happen—people start getting killed. It soon becomes clear that a crazed fan is using Todd’s “SLASHERMAN” comic as inspiration for the killings and as the bodies pile up, and Todd’s friends and family become victims themselves, Todd will be forced to take artistic responsibility.

SCARE ME
During a power outage, two strangers tell scary stories.The more Fred and Fanny commit to their tales, the more the stories come to life in the dark of a Catskills cabin. The horrors of reality manifest when Fred confronts his ultimate fear: Fanny may be the better storyteller.

TIGERS ARE NOT AFRAID
A haunting horror fairytale set against the backdrop of Mexico’s devastating drug wars, TIGERS ARE NOT AFRAID follows a group of orphaned children armed with three magical wishes, running from the ghosts that haunt them and the cartel that murdered their parents. Filmmaker Issa López creates a world that recalls the early films of Guillermo del Toro, imbued with her own gritty urban spin on magical realism to conjure a wholly unique experience that audiences will not soon forget.

TERRIFIED
On an ordinary suburban street in Buenos Aires, voices are heard from kitchen sinks. Bodies are levitating. Evil is here. It is up to a doctor, her colleague, an ex-cop to get to the bottom of this neighborhood nightmare. Demian Rugna’s must-see TERRIFIED is one of the scariest movies of 2018.

We have 3x Blu-ray and 3x DVD Prize Packs consisting of all 4 Films to GIVEAWAY courtesy of Acorn Media.

Entry details and conditions:
Competition closes at 11:59pm AEDT Sunday 10th October 2021
Open only to folks residing in Australia.
One entry per person.
Winners will be notified in the comments.
Winners receive DVD or Blu-ray Pack at random.
This is a game of creativity and skill.
Our Privacy Policy can be found here.

RANDOM ACTS OF VIOLENCE, SCARE ME, TIGERS ARE NOT AFRAID and TERRIFIED are now available on Blu-ray & DVD.