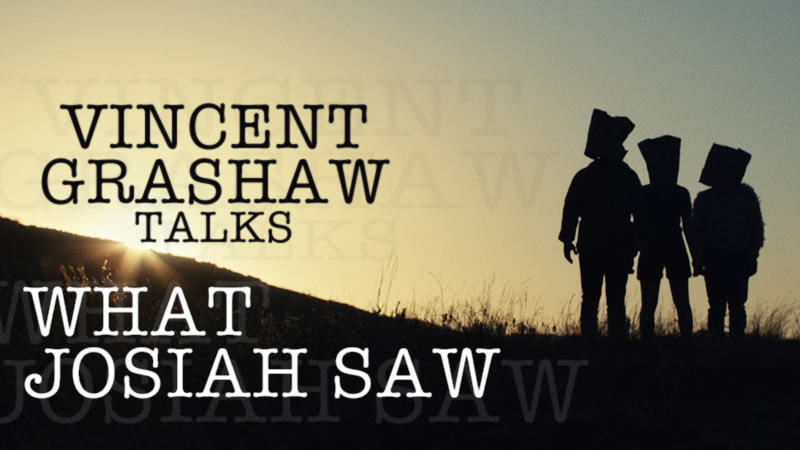 Following a run on the international film festival circuit that included Fantasia, Scream Fest and Fantaspoa, Vincent Grashaw‘s Southern Gothic horror WHAT JOSIAH SAW arrives on SHUDDER this Thursday (August 4) and we caught up with Vincent to talk about the film.

WHAT JOSIAH SAW sees you reunite with screenwriter Robert Alan Dilts, that you worked on the 2009 short film ELIKI with. Can you tell us a little about your history with one another and how you came to collaborate on a feature a decade later?

I’ve known Robert since 2007 and I had read some of his film scripts, and he had a very distinctive voice, very unique. I hadn’t read it in anything like it in the other scripts I had been reading. I was going to Fiji and I told him I had been to Fiji a year ago and I’m gonna go back. I’m like, can you write like a short for that? And I wanna shoot something in Fijian language. And so he came up with an idea that was based on Fijian history, Fiji sort of folklore. I went out there and shot it with just a camera and my girlfriend at the time. It was something that we just did for fun.

Then with What Josiah Saw, he started sending me pages of this script, while he was writing it, 10 pages at a time and he was just wanting my opinion on it. I was like wow. You know, I hadn’t read anything like that either. And so I was really interested to see where it went. And so by the time he finished, I was completely engrossed in it and pretty rattled by the conclusion. I was like, if I’m gonna make a horror movie ever, it’s gonna be this one.

What was the collaboration process like with Robert on the film? Was he ever present on set?

No, he’s a private guy. He’s a very interesting character. He’s in the East Coast, New York/ New Jersey area. We worked a lot on the script before it got financed. I think once it got financed, I don’t even remember what I told him, as I had already acquired the script at that point. He’s not the type that would want to be on set or any of that. I recall telling him hey the movie’s getting made we’re on set and I had Robert Patrick call him and just talk to him. He was really excited. So in terms of being on set, he was like this is your thing now take it, I trust you.

With the hyperlink narrative of the film, what were some of the challenges you faced in, in directing essentially three stories culminating in a fourth and final connecting tissue?

It’s funny as over the years when trying to get production companies involved, everyone tries to take what it was and what was unique about it and put it in a box that’s familiar. They want to intercut it, they’re like it doesn’t work with the structure. To me the movie doesn’t work when you cut it up, so I knew anybody that was saying that, that the movie wasn’t for them, it’s not right for them. I never really questioned that and I didn’t find it any harder than making a more linear movie that is intercut, in fact it probably was a little easier.

You are focused one thing at a time. Luckily we had shot the farmhouse stuff first and then shot Eli and Mary’s stuff separate and if anything it was kind of easier to focus in those certain chapters. I didn’t want them to feel like totally different tones. Although I did want you to feel like you’re somewhat in a different world or time, like the first chapter, you almost feel like it’s in the past, even though it’s present day and by Mary’s chapter, it feels like a modern period, present day. I wanted that people to still feel some sort of ominous feeling. So the score I hoped had bridged these chapters together, to keep it consistent. along with the specific moodiness of the cinematography too.

At a perfectly paced two hours, was there much cut out in the final edit or did everything shot make it to the screen?

Well I had spent two to three months editing and had a really fine cut by March 2020, right before the pandemic actually and it was at two hours and thirty-eight minutes and I cut forty-two minutes out. So that’s a lot, I don’t know if it’s common, I’ve never had to cut that much out of a movie, but it’s a dense script and the script wasn’t like that many pages either. It was one of those things where you’re like wow the page count didn’t match. It was tough to lose a couple scenes, but for the most part, everything that went don’t miss it at all.

Yeah, it definitely doesn’t feel that anything is missing. That said are we likely to see any of these deleted scenes?

Well I did supply Shudder with eleven deleted scenes so it’s possible, hopefully.

The film is anchored by incredible performances all around. Being that you were pivotal in getting the film made, how large a part did you have in casting the film?

At this budget level you don’t have the luxury to get some of the cast that your investor wants to get. But my team, my investor and the production company were so easy going and realistic with the people we wanted to go for. They wanted the movie to happen regardless.

Robert Patrick who played Josiah is a legend in the industry. I’ve been watching his work since I was a teenager so to even get him on the phone and have a Skype call with him was great. One of my good friends had referred him to me as he had worked with him and for me to get that opportunity, to have him read the script, was a real opportunity. Nick Stahl, who I’ve been a fan of, and to see him again with Kelli Garner, who co-starred with him in Bully.

Scott Haze was attached to the film for about five years, before we shot it. He was always on board to play that role and that Thomas character is another character that I thought, depending on who plays this, it can go horribly wrong. So it was great to have him on the film and his career is blowing up right now. I’m lucky to have worked with these people as they’re seasoned pros.

And Tony Hale too, in a dramatic role as, albeit a smaller part, he just nails it in that dramatic role. I’m used to seeing him in comic roles from VEEP to Arrested Development, and in this dramatic role he’s incredible.

I agree. And I think a lot of people that have seen the film are like wow Tony, we haven’t seen you ever go there before. He was in my last film before What Josiah Saw. And so he’s the type of guy who I will try and get on in every film because he’s just fun. He’s a good guy, really talented and it’s cool to see him switch gears a little bit and do something interesting that he hasn’t.

Jake Weber too, who played the Boone character. I had never worked with him. Yeah. He came out for two days and was such a good guy. Out of any actor I’ve ever worked with was the most technical pro I’ve ever worked with. He knew his movements continuity. So if he did a monologue, which he did, he knew when he lifted his leg, when he lit the cigarette, when he did anything. And then after a take, I was like great. He’s like, are we sticking with that one? Because he knew what he did on that take, not the one before. And he is like, if we’re marrying to that one, I’m gonna marry to what I did. And so he hit his marks all the time. I had never seen an actor work that way. Some actors are like that and you gotta kind of adjust for that because you don’t want to disrupt their process, but it was cool to see Jake do that.

With the film’s setting, its emphasis on family and the themes throughout the story, it’s a perfect slice of Southern Gothic. Do you have a favourite Southern Gothic film or piece of literature?

I don’t know if you would consider it Southern Gothic, but Cormac McCarthy’s No Country For Old Men, it has such a dust in the air feel, it’s so visceral and I feel WHAT JOSIAH SAW read the same way. The writing is very atmospheric and so visceral, when you read that material, to me it’s not hard to transfer that to the screen.

WHAT JOSIAH SAW streaming on SHUDDER from August 4