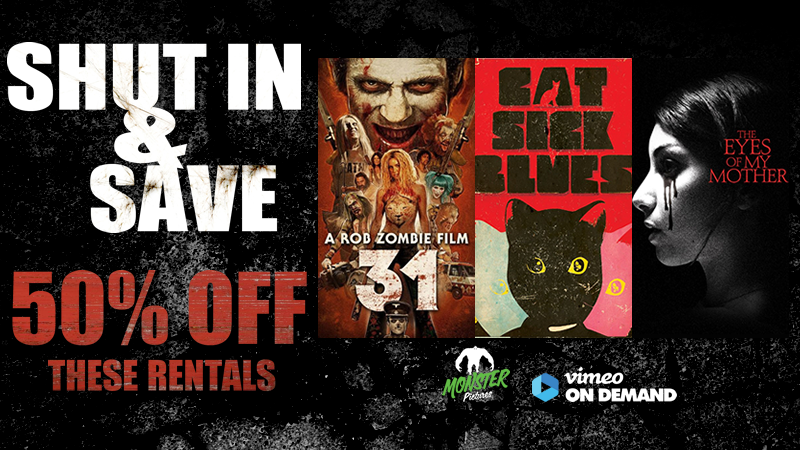 Shut In & Save With 50% OFF These On-Demand Films!

SHUT IN & SAVE returns with these MONSTER PICTURES films on-demand at 50% OFF and best of all you don’t have to depend on Aussie Post for delivery as they’re digital!

Fire up any of the titles on the links below and remember to add the Discount Code SHUTIN2020 at checkout to receive 50% off your rental!

ROB ZOMBIE’S 31
Stream It Now
Set in 1976, five carnival workers are kidnapped and held hostage in an isolated compound known as ‘Murderworld’. On Halloween, they are thrown into a sadistic game called “31” where they must survive 12 hours against a gang of maniacs dressed like clowns!

CAT SICK BLUES
Stream It Now
CAT SICK BLUES follows introverted loner Ted (Matthew C. Vaughn) who after suffering a mental breakdown from the death of his cat, convinces himself that in order to bring his beloved pet back to life, he needs nine human lives to sacrifice in its place. Constructing a cat costume, complete with mask and razor-sharp claws, Ted embarks on a murderous rampage, slashing his way through share houses, backpacker hostels and webcam chat rooms in a savage frenzy. As the butchery escalates, a twisted and bleak romance blossoms between Ted and Claire (Shian Denovan), a young woman he meets in a support group for recently bereaved pet owners.

THE EYES OF MY MOTHER
Stream It Now
THE EYES OF MY MOTHER follows Francisca (Kika Magalhães), a young, lonely woman who becomes consumed by her deepest and darkest desires after tragedy strikes her quiet country life. Raised by her mother, a former surgeon from Portugal, trained in anatomy and taught to be unfazed by death, young Francisca’s idyllic life is shattered with the arrival of a mysterious visitor whose actions deeply traumatize the girl, but also awakening unique, disturbing curiosities. Though she clings to her increasingly reticent father, Francisca’s loneliness and scarred nature converge years later when her longing to connect with the world around her takes on a dark form.

Follow the links above to access your choice of film and remember to enter the code SHUTIN2020 at checkout to get your discount!