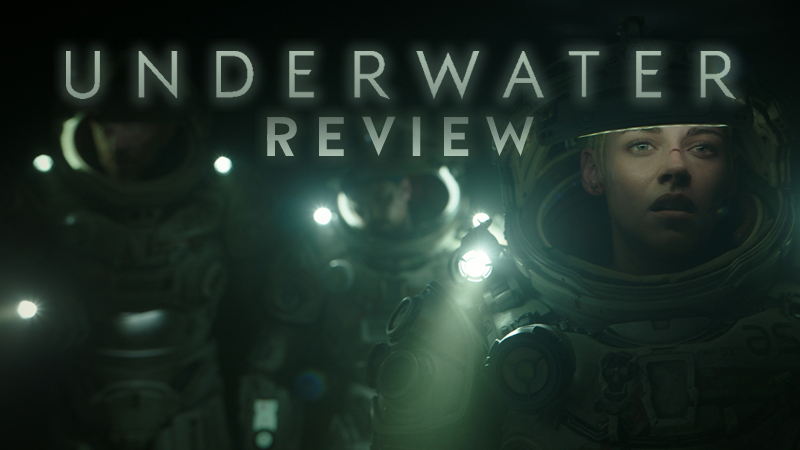 THE SIGNAL director William Eubank doesn’t waste a second in ramping up the tension in his latest below-the-waves horror film, aptly titled UNDERWATER which stars the little known Kristen Stewart (ZATHURA, CATCH THAT KID), French hard man, Vincent Cassel (BROTHERHOOD OF THE WOLF, LA HAINE), British TV darling Jessica Henwick (GAME OF THRONES, DAREDEVIL) and a tubby, tattooed T.J. Miller (SILICON VALLEY, MY IDIOT BROTHER). You’re barely in your seat before disaster strikes the crew of a deep sea mining station, the Kepler, located a mere six or so miles below the surface. What kind of disaster? We don’t know. One minute we’re brushing our teeth, the next minute water is coming in from every nook, cranny and crevice and plaque is now the least of our worries.

With the station partially destroyed, most of the crew wiped out and communications disabled, the few remaining survivors concoct a daring plan to traverse a mile or so of the ocean floor on foot to reach another older and slightly out-of-commission mining platform, the Roebuck. They hope to access the Roebuck’s escape pods and safely jettison to the surface without getting a bad case of the bends. ‘Hope’ being the key word.  Of course, if other deep water films like THE MEG, DEEPSTAR SIX, DEEP RISING or LEVIATHAN have taught us anything, it’s that water pressure on (and below) the ocean floor is so extreme that whatever wildly fucked up creatures  live there, they are sure to be super gross and, usually out for interloper blood …and bone …and skin …and teeth and any other part of us that they can sink their slimy tentacles into; UNDERWATER is no exception. As Stewart and co. venture eastbound and down into the big blue, they discover they are not alone. Among the floating debris of their old home and the bloated corpses of their former colleagues, some creepy crawlies feed. Looking like a cross between zombified jellyfish and your friend’s creepy uncle, these spineless, ghost-like bastards make it pretty clear that they aren’t here to make friends and play nice. What follows is an chain of people getting, munched, crunched, suckled, swallowed, slimed and spat out. It’s a veritable orgy of brine-laden carnivorous carnage.

As I mentioned above, it’s all very tense. I think I spent 90 minutes of the film’s 95 minute runtime fully clenched. Couldn’t have farted if I’d wanted to. Between David Farmer’s (THE REPLACEMENTS, AVENGERS: ENDGAME) ominous sound design, Stewart’s occasionally indecipherable dialogue, and the many, many jump scares (of which my reaction to, EVERY BLOODY TIME severely annoyed several people sitting near me), there was a lot to like about Eubank’s film. Considering I hadn’t even heard of this film until I saw the trailer before JOJO RABBIT, UNDERWATER is a remarkably tight, watchable film with plenty to keep even those with the smallest attention span’s entertained.