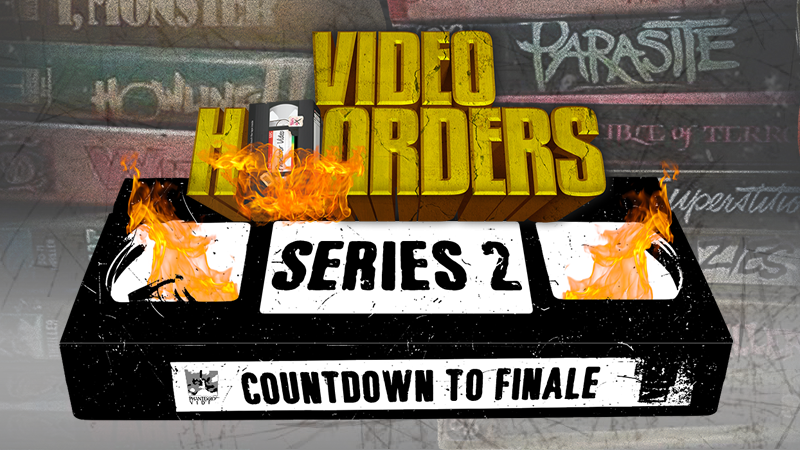 All good things must come to an end…well for the time being at least in this instance. This Friday we’re screening the Season Finale of VIDEO HOARDERS Series 2 live via our FRIDAY FRIGHT NIGHT program and what an episode to go out on! Rob & Lads track down a fresh soul by the name of Alex Lanco deep down in Henrietta’s fruit cellar!

While you wait for the Season Finale this Friday Night, why catch-up or revisit the rest of Series 2 but get comfortable as you’ve got about 100 minutes of VIDEO HOARDERS ahead of you…

EPISODE SEVEN – Harley Julian
In this week’s episode of VIDEO HOARDERS, Rob and the lads delve into arguably the greatest VHS collection we’ve had on two seasons of the show. Nestled deep in the dark heart of Australia’s Capital Territory, Harley Julian’s expansive library of cassetted delights is a true wonder to behold. Every tape is immaculate and the breadth and scope of his collection is reminiscent of some of the pre-Blockbuster Video Library superstores of the late 80s / early 90s. From classics to cult, action to adult, kung-fu to comedy, Harley’s library has it all. If there’s once episode of VIDEO HOARDERS not to miss, it’s this one!

EPISODE EIGHT – Zak Hepburn & The Astor Theatre
Melbourne’s historic Art Deco movie palace, The Astor Theatre, hosts Rob and the team on this very special episode of VIDEO HOARDERS. General Manager, Programmer and ABC News Breakfast film critic Zak Hepburn takes us on a guided tour behind-the-scenes of the cinematic landmark and fills us in on its 84-year history. If you’re a fan of cinema, cinemas and Australian cinema history, this is an episode not to miss!

EPISODE NINE – Daniel Pitcher
The VIDEO HOARDERS crew head out to the South Australian coast line, not far from where STORM BOY was filmed, to catch up with collector-extraordinaire, Daniel Pitcher. Daniel’s astounding VHS collection is protected by Prairie the Goat, which, considering the quality of the man’s collection, is 100% understandable. Tapes on display include BLAME IT ON LAMBADA (VIDEO DISTRIBUTION COMPANY), THE BEAST IN THE CELLAR (Tag Video), ATOR THE INVINCIBLE (Showcase), ESCAPE TO THE SUN (Video Classics), DIRTY MARY CRAZY LARRY (Fox Video) and CHARLI (Tag Video).

EPISODE TEN – Deniel Cross
Once again the VIDEO HOARDERS trio head to Australia’s murder capital, Adelaide, this time to partake in a couple of work beers and visit the garage of Deniel Cross. Hidden away in the leafy suburbs of the city of churches lies one of the most magnificent VHS collections we’ve come across so far. Filled to bursting with some of the finest horrors, po-pocs (post-apocalyptic films), barbos (barbarian films), slims (sell-thru tapes) and salacious smut, Deniel has enough gold he could open a shop… and in fact, that’s what he did! Six months after we visited him, Deniel opened up Star Blaze Collectables in Hindley St, right across from the GU Film House Cinema in Adelaide. Tapes on show in the garage (and in the store) include THE DEADLY SPAWN (Prestige Video), REVENGE OF THE NERDS (CBS-Fox Video), 1990: THE BRONX WARRIORS (RCA Columbia Pictures Hoyts) and CINDERELLA 2000 (Super Video). Also on display is Deniel’s magnificent retro video game collection which includes relics from Nintendo, Sega, NeoGeo, Amiga, and Atari.

The Season Finale of VIDEO HOARDERS Series 2 will premiere live this Friday via our Fangoria x Monster Fest Presents FRIDAY FRIGHT NIGHT from 9PM AEST on our Monster Fest Facebook!