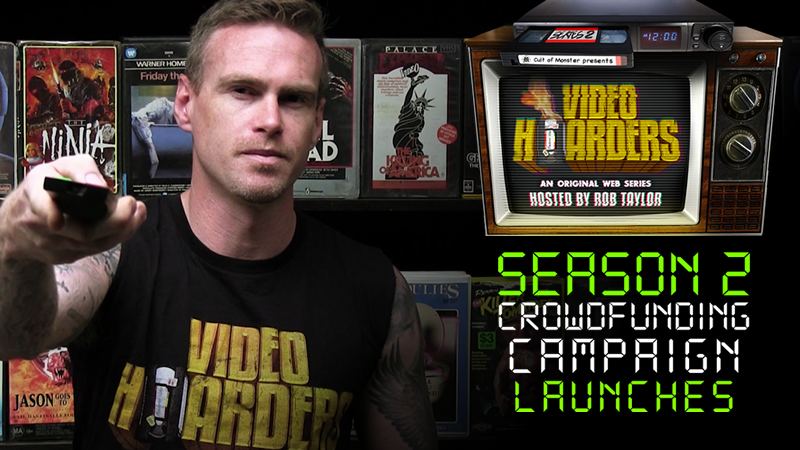 <strong>VIDEO HOARDERS</strong> is an web-series that follows series creator &amp; host Rob Taylor as he journeys around Australia tracking down likeminded video tape collectors affectionately dubbed ‘tape-heads’ to check out their collections and “<em>search the wild for that next rare find</em>”.

Season One consisted of 12 Episodes and commenced streaming fortnightly via Cult of Monster from August 2017 through March 2018 with a combined 128,000 views across the season. The first season Rob venture around Victoria, South Australia &amp; Western Australia but with Season Two he wants to take his crew with him to visit more collectors across all of Australia and while feedback on the first season was overwhelmingly positive, the one criticism he received is that viewers want longer episodes and with Season Two he’s putting that into action with more extensive coverage and extended runtimes!

The campaign’s budget has been divided three ways, all of which are hard costs. As VIDEO HOARDERS is Rob’s passion project he’s not intending to be paid for his work nor are his crew however they need to cover basic costs like our travel, outsourced post-production, Pozible’s campaign hosting fees and the production of campaign rewards.

If you <a href=”https://monster.pozible.com/project/video-hoarders-season-2″>pledge to the campaign</a>, you’ll be to choose from a huge range of rewards for your support. These rewards include VIDEO HOARDERS Season One on VHS, all-new VIDEO HOARDERS T-Shirts, Monster Fest VIP Passes and even an Executive Producer on VIDEO HOARDERS Season Two!
<img class=”size-full wp-image-7396 aligncenter” src=”http://cultofmonster.com.au/wordpress/wp-content/uploads/2019/01/VideoHoarders-ArticleRewards.fw_.png” alt=”” />The <a href=”https://monster.pozible.com/project/video-hoarders-season-2″>crowdfunding campaign</a> has just kicked off this evening and will run until Monday February 18th 6pm AEDT.