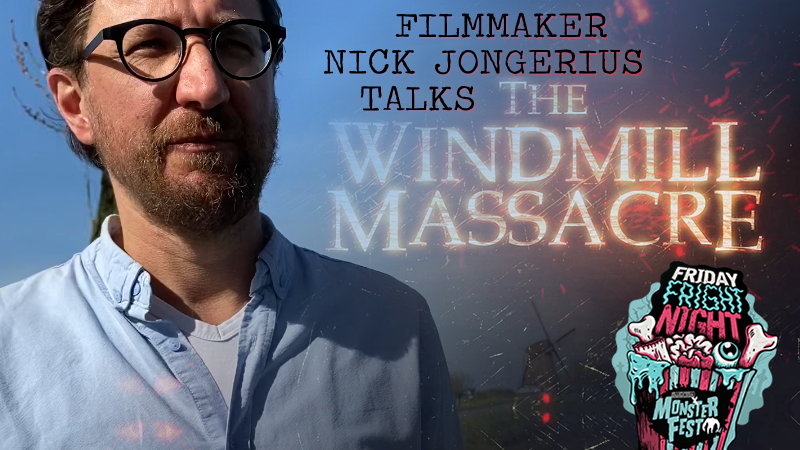 Nick Jongerius, the co-writer/director behind the 2016 modern slasher classic THE WINDMILL MASSACRE, took some time to answer a few questions about the film, ahead of our free FRIDAY FRIGHT NIGHT screening via our Monster Fest Facebook Page this Friday 9pm (AEST).

MONSTER FEST: Where did the concept for THE WINDMILL MASSACRE originate, is it loosely based on Dutch folklore?

NICK JONGERIUS: Dutch windmills have lots of creepy ghost like stories. In my research I visited I think about 250 of the 2250 working windmills in Holland. I spoke with a lot of millers and they all had interesting or gruesome stories to share. Windmills for a long time (between 18 and 19 century) where the highest buildings in our flat green country. Lighting would strike more then often and burn the mill and whole miller families inside. Absolutely horrific. At a certain point I stumbled upon a book about Dutch myths and sages. There were two stories that Chris Mitchell and I combined. One story was about a miller who sells his soul to the devil to keep his blades turning wind or no wind. And the other one was about a miller who thought he could have eternal life by grinding the bones of innocent victims in his mill and put the bone flower in his bread. We wanted a backstory that was creepy but also had a heightened reality to it. I wanted to do something else with the slasher genre other then a realistic creepy man who kills people for no particular reason. I love Grimm fairytales and felt it was the right approach for this film.

MF: Whilst the film is undoubtably a slasher and one of the best if not the best in recent years, it also has a very Hammer & Amicus feel about it, were the films of these studios are a direct influence at all?

NJ: Stop with all the compliments I am starting to blush! And very perceptive! Amicus and Hammer were a big influence to our story. Chris and I also put references to old disaster movies in the script. You see that the most in the type of characters who are in the film. Pretty old school archetypical characters like the concerned father, the bitch beauty queen etc. The film is kind of self-aware in that sense. We loved the idea of people having big secrets and that these secrets were a big burden to them all. It is something they carry with them and deep down wants to get out. I really like the fact they all have this in common and that it is the main reason they are all together. You either hate it or love it is something I learned during the release of the film.

MF: One of the major elements that sets THE WINDMILL MASSACRE apart from both past and present slasher films are its rich characters and the empathy they elicit from the viewer. Was that a key focus from your concept or something that came about with Chris W. Mitchell & Suzy Quid’s screenplay?

NJ: After we shot the concept teaser the main thing I learned from that was that I wasn’t interested in doing a slasher with a real life maniac. Directing this film (as a first time director) was also a journey inwards to see what I like and find interesting. I knew I wanted to put as much of myself in the film as possible, because it comes across I think. For instance I’m fascinated by Japanese culture. In a sense the story has elements of a Japanese ghost story in them. There is a Japanese ghost that whispers to you and if you hear him it means you are going to die. I’m really sacred of willow trees and found out in the research that willow trees (in Japan culture) have a direct link to ghosts. I really like fantasy elements in horror films. I like the films that have their own universe and rules. My all time favourite horror film is A NIGHTMARE ON ELM STREET. The fact that a boogeyman can get you in your sleep and can bend time and space so you always have a disadvantage is something I truly thought was brilliant. The hook for our film meant we had to have strong and interesting characters with backstory and some depth to them. The mission was to have a mix of characters you want dead (because that is a common rule in slashers) and a couple of characters you really care for and are rooting for. It helps if they have conflicting character arches and that they really do an effort to fix the things they have broken.

MF: Do you have an affinity for Australia? Given the film features both one of Australia’s greatest acting exports, Noah Taylor and the lead character of Jennifer is Australian (despite being a British actress).

NJ: Hahaha… If you put it like that you might think that…. Honest answer is this is pure coincidence. The story was set in Holland and because our main character Jennifer is on the run from her past we chose the country that is furthest away from Holland. Noah Taylor I love as an actor. If you compare his performance in Red, White and Blue versus Submarine it is absolutely mind-blowing. I think he is a brilliant actor and he was so supportive of our film and me as a director. I learned a great deal of working with him (and the rest of our wonderful cast as well obviously).

MF: How big a hand did you have in casting the film?

NJ: This cast is 100% my casting director and my choice. We handpicked them and with every choice I went with my gut feeling. I worked with ensemble cast before in Television and knew that performance is as important as being able as an actor to work in a team and help out your fellow actor in scenes. Both elements were crucial to me. I am eternally grateful for working with casting director Dan Hubbard and Gemma Sykes. Because of their involvement great actors were interested in coming to audition. Slasher films are seen as a slippery slope for an actor and not everyone is willing to come audition based on this genre especially with a first time director involved. But because Hubbard is a well-known casting director and supported our film actors were willing to take a chance and this made a hugh difference. Charlotte Beaumont and Noah Taylor were offered the role and didn’t have to audition. I knew their work and was 200% convinced they could deliver. Thankfully they liked the script.

MF: There are quite a few twists and turns within the film, are you able to tell us a little about playing with audience expectation?

NJ: Tough question…. Chris and I basically just went with our gut feeling on this. We both have seen a lot of films in the genre and knew what we like and didn’t. Still it is hard to play with expectation. The editing process was also pretty helpful as it comes to play with the audience. We down tuned Abe a lot in editing so his involvement comes more as a surprise. We originally shot a different ending of our film. Jennifer sacrificed herself so Curt could get out of this purgatory. During the editing I learned that we were wrong about this and that I strayed from the genre path too much. Brian de Palma said that you have to respect the rules that every genre has. And that was a hard lesson I learned during the editing process. Thankfully we were able to reshoot a little bit. In the last two weeks of editing I reshot the ending with close up shots of Curt getting blood on his face and a dummy body of Jennifer being dragged towards the mill with the chain in her head.

MF: Another aspect of THE WINDMILL MASSACRE that sets it apart from films of its ilk are the incredible practical effects. Was this an important aesthetic decision for you?

NJ: Yes this was key to me. I wanted every kill to have meaning in a storytelling sense but I also wanted to give a statement to the craft that goes into making these movies. It was really hard and there were a lot of moments I wanted to take the CGI shortcut. We had lots of overtime; it was all done during nightshoots, which makes you extreme inefficient because of the way you light your scenes. But we didn’t bend and stayed on track. Now looking back it is something that everyone likes and appreciates in our film.

MF: What’s next for you and are there plans for THE WINDMILL MASSACRE 2 at all?

NJ: I would love to go back to the world we created in THE WINDMILL MASSACRE and I think there are lots of interesting stories to tell with the Miller and Abe, but for now my main focus is a sci-fi thriller but without the spaceships. I’m a big fan of conspiracy theories and old science fiction films and I combined those elements with a famous European abduction case, where a strange interdependence grew between the abductor and the abductee. The central story in this film is: who really is the abductee?

THE WINDMILL MASSACRE screens this Friday night 9pm (AEST) via our Monster Fest Facebook Page and is also available on DVD & Blu-ray from our Monster Shop.

THE WINDMILL MASSACRE follows Jennifer (Charlotte Beaumont, BROADCHURCH), an Australian girl on the run from her past who washes up in Amsterdam. In a desperate attempt to stay one step ahead of the authorities, she joins a coach-load of tourists embarking on a tour of Holland’s world famous windmills. When the bus breaks down in the middle of nowhere, she and the other tourists are forced to seek shelter in a disused shed beside a sinister windmill where, legend has it, a Devil-worshiping miller once ground the bones of locals instead of grain. As members of the group start to disappear, Jennifer learns that they all have something in common – a shared secret that seems to mark them all for doom.