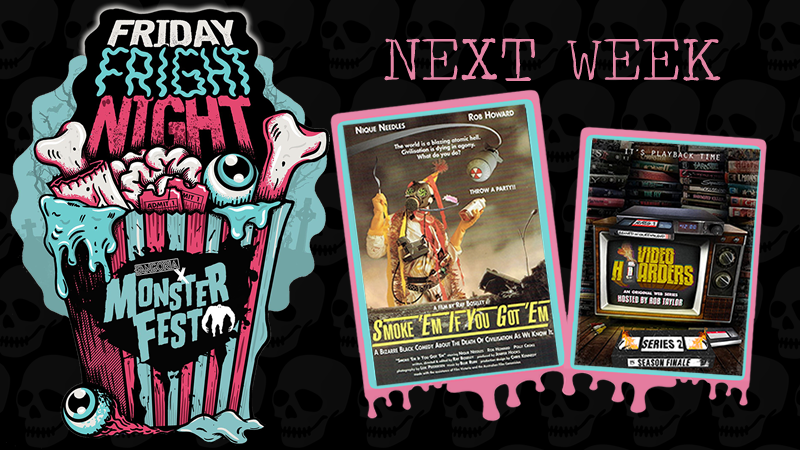 Now that we’ve got our attention, we can reveal that our May 8th event is only our final FRIDAY FRIGHT NIGHT for now!

That’s right we’ll be back from Friday May 29th with an all-new program that we’ll be revealing on the night accompanied by a Mystery Movie Screening!

So while good things must come to an end (even if just temporarily), that doesn’t mean having to go out on a sombre note…let’s party till we’re dead!

In another first, we’ll be premiering the Season Finale of VIDEO HOARDERS Series 2 LIVE!

That’s right, after a season of extended-length episodes that saw Rob Taylor and crew venture around Australia all in the name of almighty [VHS], the boys return home to Melbourne to visit tapehead and EVIL DEAD aficionado Alex Lanco’s cabin to check out what’s fresh in his fruit cellar!

This Season Finale will include an EXCLUSIVE introduction from the VIDEO HOARDERS crew Rob Taylor, Jarret Gahan & Ben Hellwig and they’ve got an exciting announcement to share with you!

SMOKE ‘EM IF YOU GOT ‘EM is a long lost post-apocalyptic classic – a nuke and puke masterpiece for the post-punk crowd – set slap bang in the middle of Melbourne’s 80’s underground music scene. Starring Nique Needles (DOGS IN SPACE), Clayton Jacobson (KENNY), Rob Howard, Fred Dugina, Danny Lillford (TRAILER PARK BOYS) and featuring the music of BLUE RUIN / SCRAP MUSEUM, the film is a satirical look at the last days of mankind.

In the smouldering devastation of post nuclear bomb-blasted Melbourne, a periscope protruding from a pile of rubble leads three desperate scavengers to a subterranean fall-out shelter. They muscle their way in, only to discover a raging party in a converted wine cellar, celebrating the Big Meltdown. There’s a band, booze, sex, drugs and a horde of sweat-soaked revellers partying like there is no tomorrow… which for these poor radiation-drenched end-of-the-worlders there isn’t. What choice do the scroungers have but to join in?

Join us from where ever you are in the world THIS FRIDAY 9PM AEST at our Monster Fest Facebook Page for FANGORIA x MONSTER FEST Presents FRIDAY FRIGHT NIGHT!