FIRE IN THE SKY To Make Its Global Blu-ray In Australia!

Highly regarded among Sci-Fi fans, Robert Lieberman’s 1993 feature FIRE IN THE SKY has long been one of the most requested titles to be released on Blu-ray globally and finally someone has answered the call, thankfully it’s none other than Australian distributor Via Vision Entertainment through their [IMPRINT] label. 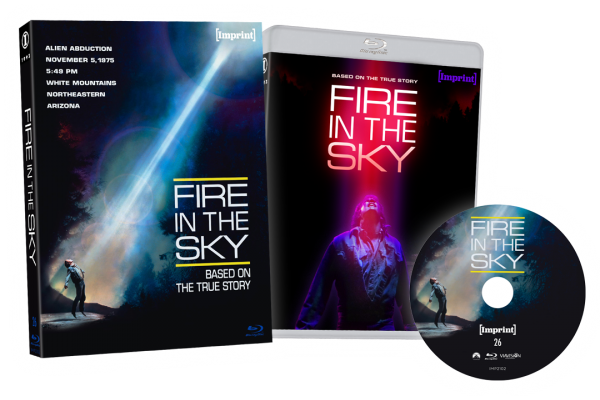 In 1975, logger Travis Walton (D.B. Sweeney) and his co-workers discovered a hovering UFO. Walton’s pals fled, but Walton was not so fortunate. Whisked aboard the strange aircraft, he was subjected to a painful, unearthly medical study. FIRE IN THE SKY is the amazing tale of that ordeal… and of the contempt and ridicule endured by the co-workers as they try to explain Walton’s mysterious disappearance.

What’s more [IMPRINT] have gone the deluxe route by loading this release with loads of all-new EXCLUSIVE Special Features.

The initial release will be limited to 1,500 units and will feature a limited edition Slipcover with alternate artwork to that will be feature on the sleeve.

FIRE IN THE SKY is slated for a December 30th release but you can pre-order now and given the track record of [IMPRINT] titles selling out then reselling on FleaBay for outrageous prices, we recommend you lock-in your pre-order asap!