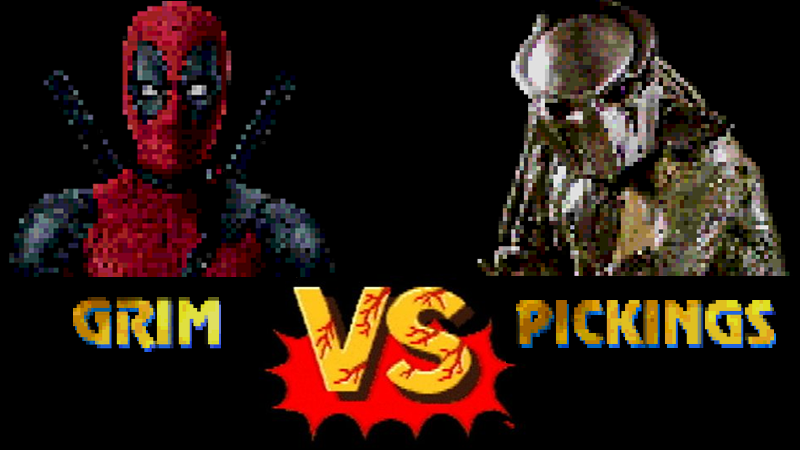 GRIM PICKINGS this week includes key dates to dismember with one of 2018’s biggest box office hits getting a theatrical remix while the universe’s ultimate hunter is unleashed on home entertainment.

Thursday December 13th
ONCE UPON A DEADPOOL
This is one shameless cash grab we can get behind, a remix of DEADPOOL 2 with heavy edits to the existing film and newly added footage to steer the narrative, best of all a portion of ticket sales will go to charity! To kick off the holiday season audiences of almost all ages will soon be able to enjoy the Merc with the Mouth’s reimagining of DEADPOOL 2 filtered through the prism of childlike innocence.

SPIDER-MAN: INTO THE SPIDER-VERSE
Spider-Man goes meta in this fast-paced, action-packed and at times hilarious all-new adventure with a revolutionary style of animation that will literally have you dragging your jaw from the floor as you leave the cinema. PS: stick around after the credits for an amusing action-after-credits sequence! Spider-Man crosses parallel dimensions and teams up with the Spider-Men of those dimensions to stop a threat to all reality.

BLACK ’47
Lance Daly (THE GOOD DOCTOR) helms this gritty western come historical drama against the backdrop of the Great Famine in Ireland with a standout performance from Hugo Weaving. It’s 1847 and Ireland is in the grip of the Great Famine that has ravaged the country for two long years. Feeney (James Frecheville), a hardened Irish Ranger who has been fighting for the British Army abroad, abandons his post to return home and re-unite with his estranged family. He’s seen more than his share of horrors but nothing prepares him for the famine’s hopeless destruction of his homeland. He discovers his mother starved to death and his brother hanged by the brutal hand of the English. With little else to live for, he sets on a destructive path to avenge his family, systematically working his way up the political and social hierarchy of 19th Century Ireland. Hannah (Weaving), an ageing British soldier and famed tracker of deserters, is sent to stop Feeney before he can further stoke the fires of revolution. But Hannah and Feeney are old army comrades with a mutual respect forged by their times fighting together. Personal bonds and shifting allegiances cause both men to question their motives, as they are tested to the limit by the hellish landscape of ‘the Great Hunger’.

Wednesday December 12th
THE PREDATOR
Filmmaker Shane Black (THE NICE GUYS), who actually starred in 1987’s PREDATOR as Hawkins, returns to the long dormant franchise as co-writer/director on THE PREDATOR and shares script duties with beloved cult filmmaker Fred Dekker (THE MONSTER SQUAD, NIGHT OF THE CREEPS). While not quite reaching the expectations set by the pedigree involved, THE PREDATOR still proves to be a fun, over-the-top and at times visually spectacular entry to the franchise. Now, the universe’s most lethal hunters are stronger, smarter and deadlier than ever before, having genetically upgraded themselves with DNA from other species. When a young boy accidentally triggers their return to Earth, only a ragtag crew of ex-soldiers and a disgruntled science teacher can prevent the end of the human race. The 4K Ultra-HD & Blu-ray releases contain Deleted Scenes, four Featurettes and an Image Gallery!

A SIMPLE FAVOUR
While his name is typically synonymous with comedy, director Paul Feig (BRIDESMAIDS) delivers a stylish, sophisticated and of course funny suburban-noir lead by Anna Kendrick & Blake Lively, whose onscreen chemistry is a raging blaze! Stephanie (Kendrick, PITCH PERFECT) is a mommy blogger who seeks to uncover the truth behind her best friend Emily’s (Lively, THE SHALLOWS) sudden disappearance from their small town. Stephanie is joined by Emily’s husband Sean (Henry Golding, CRAZY RICK ASIANS) in this thriller filled with twists and betrayals, secrets and revelations, love and loyalty, murder and revenge.

BEAST (DVD Only)
Writer/director Michael Pearce’s debut feature, BEAST, is quite the achievement, a stunning modern gothic thriller that defies expectation and unsettles with its every move, featuring an exceptional performance by lead Jessie Buckley. Moll (Buckley, TABOO) is 27 and still living at home, stifled by the small island community around her and too beholden to her family to break away. When she meets Pascal, a free-spirited stranger, a whole new world opens up to her and she begins to feel alive for the first time, falling madly in love. Finally breaking free from her family, Moll moves in with Pascal (Johnny Flynn, CLOUDS OF SILS MARIA) to start a new life. But when he is arrested as the key suspect in a series of brutal murders, she is left isolated and afraid. Choosing to stand with him against the suspicions of the community, Moll finds herself forced to make choices that will impact her life forever.

MEGALODON (DVD Only)
Another mockbuster cash-in from ole’ faithful The Asylum arrives a fortnight after the home entertainment release of THE MEG, starring none other than Mr Blonde himself Michael Madsen.  A US military vessel on the search for an unidentified submarine finds more than they bargained for, coming across Russian spies willing to pick a fight. Just when they though t they were in too deep, the crew encounter the giant beast, MEGALODON and must fight against the odds to survive the monstrous beast, using only what is aboard to defend themselves.