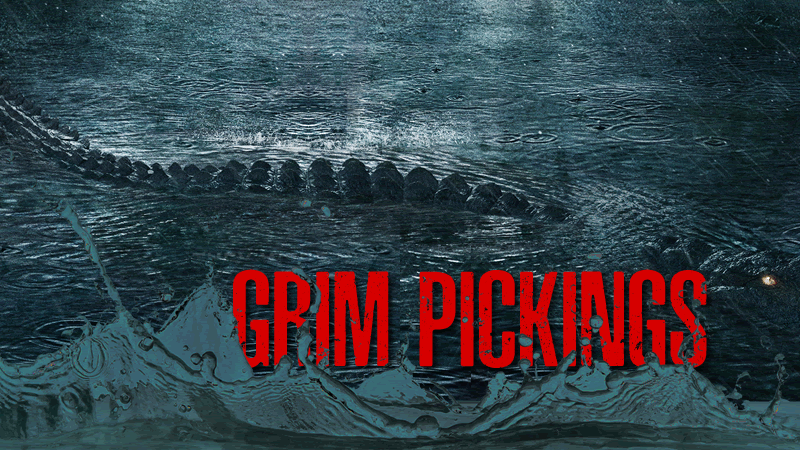 CRAWL
Genre stalwart Alexandre Aja (PIRANHA 3D, HIGH TENSION) helms this fast-paced, anxiety-inducing and throughly enjoyable creature-feature meets disaster flick with expert precision. There’s no dilly-dallying about in CRAWL, the breakneck action begins immediately after the opening titles and doesn’t let up for the entire ninety minutes, in a word ‘breathless’. Fans of Aja’s prior films, will know of his masterful use of carnage and gore and CRAWL is no exception, with some of the most creative kills the big screen has bared witness to in recent years. That’s not to say that CRAWL is pure show, it is in fact one of the more suspenseful genre outings in some time too but comes with the added bonus of genuine payoffs! Get to a cinema this weekend and see it on the biggest screen with the loudest sound you can, CRAWL is undoubtably one of the best cinema-going experiences of 2019! When a massive hurricane hits her Florida hometown, Haley (Kaya Scodelario) ignores evacuation orders to search for her missing father (Barry Pepper). Finding him gravely injured in the crawl space of their family home, the two become trapped by quickly encroaching floodwaters. As time runs out to escape the strengthening storm, Haley and her father discover that the rising water level is the least of their fears.

STUBER
Kumail Nanjiani (SILICON VALLEY) and Dave Bautista (GUARDIANS OF THE GALAXY) make for a perfect pairing in this buddy comedy that delivers just as many big laughs as it does high-octane action. Foul-mouthed, fast-paced and surprisingly violent, STUBER is quite possibly the best action-comedy in years! When a mild-mannered Uber driver named Stu (Nanjiani) picks up a passenger (Bautista) who turns out to be a cop hot on the trail of a brutal killer, he’s thrust into a harrowing ordeal where he desperately tries to hold onto his wits, his life and his five-star rating.

BOOKSMART
Actress come filmmaker Olivia Wilde makes her directorial debut with this refreshing coming-of-age tale that gender flips the average teen comedy and in turn delivers a sincere, heartfelt and often hilarious dramedy. Leads Kaitlyn Dever (DETROIT) and Beanie Feldstein (LADY BIRD) share magnetic screen chemistry as two studious teens whose quest to enjoy just one party before they graduate results in an epic night’s adventure. On the eve of their high school graduation, two academic superstars and best friends suddenly realize that they should have worked less and played more. Determined never to fall short of their peers, the girls set out on a mission to cram four years of fun into one night.

PET SEMATARY (DVD, Blu-Ray, UHD)
Kevin Kölsch & Dennis Widmyer, the directing duo behind the 2014 cult favourite STARRY EYES, helm this all-new adaptation of the seminal Stephen King classic, PET SEMATARY, with mixed results. Feeling more like a faint photocopy of Mary Lambert’s 1989 adaptation with unnecessary changes, this new retelling lacks the atmosphere, depth and genuine scare value of its predecessor. That said it does carry a gripping and punchy final act that elevates slightly above other contemporary retreads of similar ilk. Dr. Louis Creed (Jason Clarke), who, after relocating with his wife Rachel (Amy Seimetz) and their two young children from Boston to rural Maine, discovers a mysterious burial ground hidden deep in the woods near the family’s new home. When tragedy strikes, Louis turns to his unusual neighbour, Jud Crandall (John Lithgow), setting off a perilous chain reaction that unleashes an unfathomable evil with horrific consequences. Paramount Pictures’ 4K Ultra-HD/Blu-ray & Blu-ray releases contain eight Deleted Scenes including an Alternate Ending, two featurettes and extensive four-part Documentary that runs at just under an hour! Both releases contain an eerily immersive Dolby Atmos track with couch-clenching hits from the sub and the 4K UHD also benefits from HDR augmentation!

FIGHTING WITH MY FAMILY (DVD, Blu-Ray)
Stephen Merchant (THE OFFICE, HELLO LADIES) helms this crowd-pleasing comedy based on the true story of WWE wrestling star Paige, that despite its cliches and corny nature, delivers a straight-up entertaining underdog story. Reformed gangster Ricky, wife Julia, daughter Paige and son Zak make a living wrestling together in tiny venues. When Paige and Zak get the opportunity to try out for WWE, the family grabs a once-in-a-lifetime chance to turn their wildest dreams into a dazzling future. However, brother and sister quickly discover that to become superstars, both their talent and their relationship will be put to the test. Fighting With My Family is a heart-warming and smart comedy that proves everything is worth fighting for when it comes to family. Universal Pictures’ Blu-ray contains an Audio Commentary with Merchant, six Extended/Deleted Scenes, two Production Featurettes and a hilarious Gag Reel!