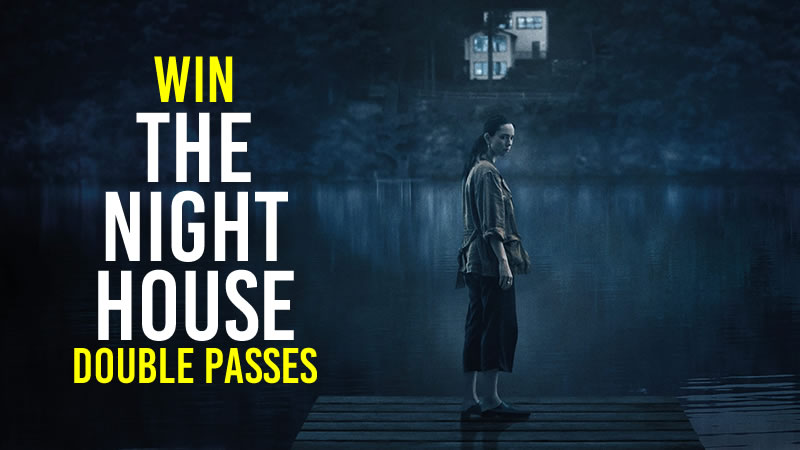 Sundance breakout hit, David Bruckner‘s THE NIGHT HOUSE opens in Aussie cinemas on August 19 and courtesy of Cinema Nova & Searchlight Pictures, we have 10x Double Passes to GIVEAWAY to see the film.

Reeling from the unexpected death of her husband, Beth (Rebecca Hall, GODZILLA VS KONG) is left alone in the lakeside home he built for her. She tries as best she can to keep it together – but then nightmares come. Disturbing visions of a presence in the house calling to her, beckoning her with a ghostly allure. Against the advice of her friends, she begins digging into her husband’s belongings, yearning for answers. What she finds are secrets both strange and disturbing – a mystery she’s determined to unravel. THE NIGHT HOUSE stars Rebecca Hall (HOLMES & WATSON, CHRISTINE), Sarah Goldberg (Barry, Elementary), Vondie Curtis Hall (DIE HARD 2, EVE’S BAYOU), Evan Jonigkeit (Togetherish, Sweetbitter), and Stacy Martin (VOX LUX, NYMPHOMANIAC).

To celebrate the theatrical release of THE NIGHT HOUSE, we have 10x Double Passes to see the film at Cinema Nova in Melbourne, courtesy of our festival partners Cinema Nova and Searchlight Pictures.

For your chance to WIN 1 of 10 THE NIGHT HOUSE Double Passes, all you need do is EMAIL US at competitions@monsterfest.com.au with your full name to let us know your most anticipated film of 2021?

Double Passes are valid for use by up to 2 people (at the same session/time) from August 19 at Cinema Nova.

Entry details and conditions:
Competition closes at 11:59pm AEST Tuesday 17th August 2021.
Open only to folks residing in Melbourne VIC.
One entry per person.
Winners will be notified in the comments.
This is a game of creativity and skill.
Our Privacy Policy can be found here.

THE NIGHT HOUSE In Cinemas August 19